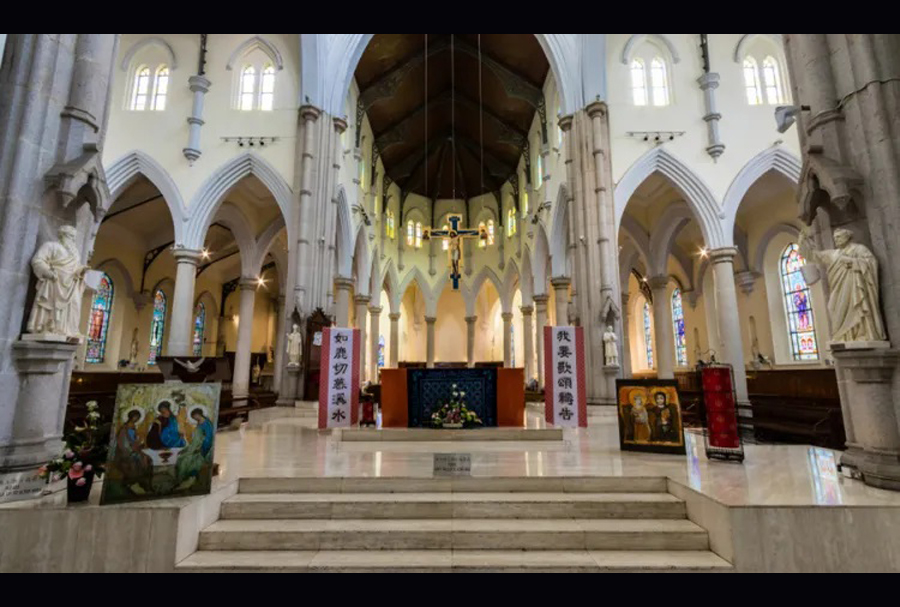 The Cathedral of the Immaculate Conception in Hong Kong. Credit: Volodymyr Dvornyk/Shutterstock / null

A Catholic priest overseeing missionaries serving in Hong Kong reportedly told the missionaries that they should prepare for a much more difficult future, as the Chinese government tightens control over the exercise of religion in Hong Kong.

Archbishop Javier Herrera Corona is the outgoing head of the Holy See Study Mission in Hong Kong, a low-key presence on the island which represents the Vatican’s only outpost in China, and from which Vatican diplomacy observes the mainland. In 2016, the Pontifical Yearbook reported in a footnote the address and telephone number of the Study Mission for the first time, which also oversees more than 50 missionary societies in Hong Kong.

According to a report by Reuters, in four meetings held over several months starting in October 2021, Herrera Corona urged his colleagues to protect their missions’ property, files, and funds, according to four people familiar with the private sessions. Herrera Corona reportedly warned that closer integration with China in coming years could lead to mainland-style restrictions on religious groups, Reuters said.

During the meetings he held, Herrera Corona reportedly expressed fear that the Catholic Church could be targeted in part because Chinese authorities had identified several prominent Catholics as leading figures in the pro-democracy demonstrations in 2019, and as critics of the national security law. Catholic pro-democracy figures such as Cardinal Joseph Zen, Jimmy Lai, and Martin Lee have all garnered media attention for their arrests at the hands of Chinese authorities.

The Vatican has not had a nunciature — essentially an embassy — in mainland China since the 1950s, when the Chinese government expelled the Vatican’s representatives. Herrera Corona has reportedly started discreetly moving cases of archives overseas for safekeeping, though the Vatican has not officially confirmed this.

Hong Kong is a special administrative region of China, whose citizens historically enjoyed freedom of religion, while on the Chinese mainland religious believers of all stripes are routinely restricted, surveilled, and oppressed by the Chinese Communist Party. Since 2019, the CCP has intensified efforts to curtail free speech in Hong Kong, including in 2020 by bypassing Hong Kong’s legislature to impose new National Security laws on the territory that gives China greater power to prosecute those who criticize the government. Millions of citizens of Hong Kong, including many Catholics, have in recent years participated in large-scale pro-democracy protests in Hong Kong, which came to a head during summer 2019.

In mainland China, there exists an underground Catholic Church, which is persecuted and loyal to Rome. Government-approved Catholic Churches, on the other hand, have comparatively more freedom of worship, but face other challenges, including pressure from the government to censor parts of Catholic teaching, while including Chinese nationalism and love for the party in preaching.

A Hong Kong priest told EWTN in April that the CCP is using ideological tactics such as re-education and propaganda to chip away at the freedom of religion in Hong Kong. A Reuters report from late December documented an October 2021 meeting at which Chinese bishops and religious leaders briefed senior Hong Kong Catholic clergymen on President Xi Jinping’s vision of religion with “Chinese characteristics.”

Speaking on an April 21 episode of EWTN’s “The World Over,” Father Vincent Woo, a priest of the Diocese of Hong Kong and a canon lawyer, said that because the CCP wants to control every aspect of society, that naturally includes the practice of religion.

Woo said that he has observed that many Christian leaders are reluctant to speak out against the CCP’s actions, for fear of being detained, or worse, by civil authorities.

Hong Kong’s National Security Law has been criticized as being overly broad on its definitions of terrorism, sedition, and foreign collusion. Some Catholic missionary societies have reportedly made moves to transfer large assets such as schools and hospitals to local ownership in Hong Kong in an attempt to avoid China’s heightened scrutiny on foreigners, Reuters reports.