How 1 Welsh Priest Brought Our Lord to Empty Streets 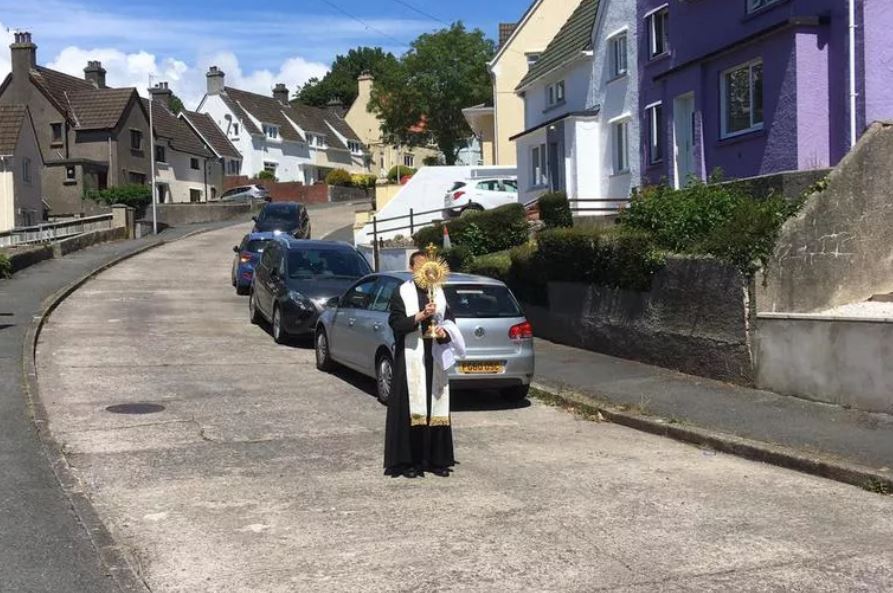 How 1 Welsh Priest Brought Our Lord to Empty Streets

Remembering a 2020 Corpus Christi procession and the mission of a clergyman.

In the summer of 2020, a solitary priest carried a monstrance containing the Sacred Host through deserted village streets in a remote part of Wales. It was a Corpus Christi procession like none other.

The priest who carried the Body of Christ to his parishioners during 2020’s feast of Corpus Christi was Father Matt Roche-Saunders, who was ordained less than two years ago.  The Register spoke to him Dec. 29, 2020, about why he decided to take the Eucharist to the empty streets amid the COVID-19 lockdown.

“I was so sad that for Corpus Christi there would be no Eucharistic procession and no gathering for the Mass. But I felt prompted by the Lord to make use of a Welsh legal concession that allowed people to meet in their gardens. I decided to offer families the opportunity to have adoration and Benediction in their garden — [and] the take-up was wonderful!”

Subsequently, Father Roche-Saunders spent the Solemnity of the Most Holy Body and Blood of Christ and the days that followed traveling, bringing the Eucharistic Lord to those parishioners who had been unable to visit church for many months.

One wonders whether the pandemic has, paradoxically, brought the Eucharist more central to his sense of priestly vocation. Has he, for example, been able to identify even more with the Holy Sacrifice when he has offered Mass privately alone each day?

“In March, I celebrated daily Mass by myself for a month before beginning to livestream,” he explained. “It was an opportunity to pray more intentionally certain parts of the Mass. I became more powerfully aware of how the Mass is a prayer of offering to the Father.” He added, “I found it a painful time, too, experiencing the very identity of the Mass as a prayer offered by the priest alongside the whole community.”

With no regular public Masses across Wales, and no Sunday obligation to attend Mass, even if churches were to resume Sunday worship in a prepandemic fashion, how does Father Roche-Saunders think things are going to develop in the weeks, months and years ahead? “We’re certainly still in an uncertain time where we can’t plan with much confidence,” he replied. “We’ve been used to a comfortable way of doing things which has been pulled from under our feet. In every parish I’ve heard of, the ‘come-back attendance’ following lockdowns is lower than before the pandemic. This is a moment to ask ourselves who we are as the Church.” He went on to explain, “Either these [the ‘come-back’ numbers] are worrying numbers for a human institution that is now a big step closer to winding down; or this is the impetus to be who we were called to be at the moment of Jesus’ Ascension: those who go out and spread the Good News and those who seek holiness and the holiness of our friends and family. Only one [the second of these possibilities] fills me with hope and makes sense of my calling as a priest of Jesus Christ. It’s also the one that takes me most out of my comfort zone, as we’re called to find new ways of saying, ‘This News is worth hearing.’ The months and years ahead will require a lot of teamwork if we’re to show the attractive quality of the Gospel and of Christ’s Church and its message of eternal happiness.”

Speaking from his parish in rural west Wales, Father Roche-Saunders is under no illusion about how “uniquely challenging” this time continues to be. “The pandemic has presented major difficulties. These include the loss of life, health and livelihoods, which affect the people we serve deeply,” he said, and while these challenges have always been present, they exist now, he reflected, with “a particular gravity.” Still, within this current situation, he senses a call: It is as if “the Lord is asking his Church: How willing are we to allow this time to change us in our approach to proclaiming the Gospel?”

In these times of major disruption to our former ways of living, Father Roche-Saunders also sees “a temptation to believe that once this pandemic reaches its endpoint we will be able to return to the systems and structures we employed before 2020, which, if we’re being honest, were often not geared towards spreading the Gospel outside the walls of our churches. To ‘go back to normal’ is not what I feel we’re being invited to,” he said, adding, “That’s where, for me, lies the unique ‘challenge’ of this time.”

When Father Roche-Saunders became aware of the severity of the pandemic, his first reaction was that “it was a time like no other to trust in God’s mercy and providence. Everything we could call our safety net, in every sense of the word, was taken from us, and it felt like all of humanity had fallen to its knees before God. That formed the theme of much of my prayer and preaching in the first period of the pandemic.”

Just three days after the first U.K.-wide lockdown came into force in March 2020, Father Roche-Saunders was asked to move to a nearby parish to cover for another priest. He viewed what could have been an inconvenience as a way of gaining insight into other people’s lives. “My own sense of having to acclimatize to a new situation where I didn’t know many people was perhaps a good experience of what others were going through in adapting to a new way of working and living,” he observed.

Born in 1991, Matthew Roche-Saunders grew up in a small town on the Welsh Borders. His family is what he describes as “faithfully Catholic.” Therefore, perhaps unsurprisingly, at age 17, he started thinking he may have a vocation to the priesthood after having made a pilgrimage to Walsingham. It was while at the Marian shrine that a visiting priest asked the teenager if he thought he had a priestly vocation. At the time, it was the furthest thing from Matthew’s mind, but the idea began to take hold of him. Eventually, in 2012, after much prayer and helpful spiritual direction, and upon having completed a degree in psychology, he entered St. Mary’s College, Oscott, as a seminarian for the Menevia Diocese in Wales. On August 4, 2018, the feast of St. John Vianney, patron saint of parish priests, Matthew Roche-Saunders was ordained to the priesthood.

One suspects that there was little in his seminary training that explicitly prepared him spiritually or pastorally for the events of 2020. And yet Father Roche-Saunders does feel he was being prepared for what later transpired. “I was blessed with an excellent formation in seminary and particularly a [seminary] rector who had a wonderfully pastoral heart,” he explained. “The priority of our time [in the seminary] was to allow our hearts to be formed and made ready for mission, whatever the context. I also learned about being rooted in a priestly identity: that we would face many challenges after our time in seminary, but we would be doing so as priests. This reminds us that we are being called to lead his flock through every situation we face, as Christ.”

In this new reality, he sees a lesson for Catholics in the U.K. as 2021 dawns. “[Here] the norm is to have such bountiful access to the Mass and confession. Our brothers and sisters in other parts of the world do not have such a privilege. I believe this time of spiritual hunger has given us a greater desire for communion with the Lord Jesus and with each other, a greater solidarity with our brothers and sisters around the world, and has shown us ways of praying and communing with others that perhaps we didn’t think of.”

Even now, with Wales still very much in lockdown, Father Roche-Saunders remains hopeful. “God can bring good out of every situation,” he said. “I’ve been very attracted by the idea that, although the Mass and confession have been taken away at times, the grace of our baptism and confirmation has not. These continue to call us to transform ordinary events of everyday life into opportunities to meet the Lord and to bring others into encounter with him.”

Today’s Events at the Capitol Had...