How Meriam Ibrahim, Sentenced to Death by Islamists, Found Life and Freedom in Christian Faith 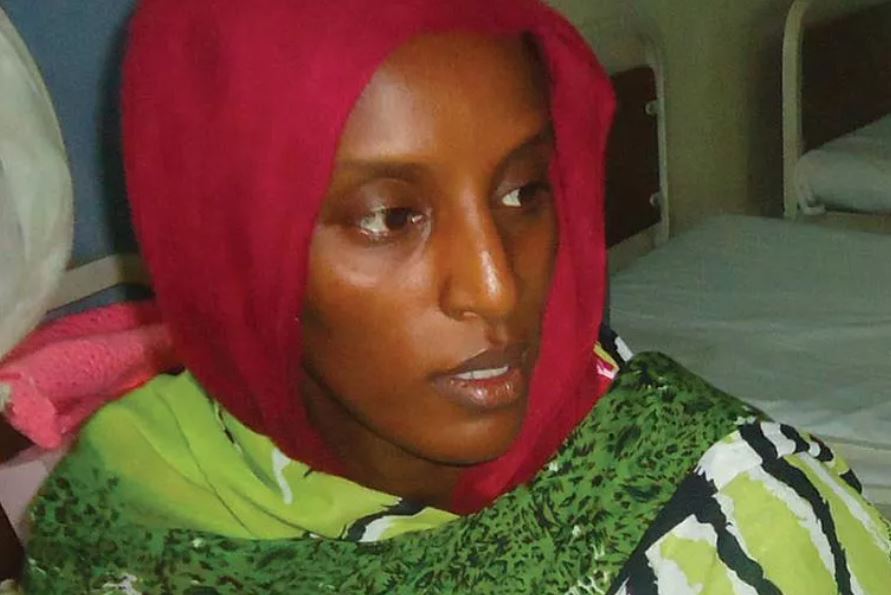 How Meriam Ibrahim, Sentenced to Death by Islamists, Found Life and Freedom in Christian Faith

Sudanese religious freedom advocate Meriam Yahia Ibrahim Ishag says a Catholic priest and the Little Sisters of the Poor gave her strength while she was in prison.

During the summer of 2014, religious freedom advocates around the world were gripped by the story of Meriam Yahia Ibrahim Ishag, a young mother forced to give birth in chains in Sudan after she was imprisoned for “apostasy” and “adultery,” for her Christian faith, and for seeking a Christian marriage despite having a Muslim father.

Following a panel on religious persecution in Africa at this week’s International Religious Freedom Summit in Washington, D.C., Ibrahim discussed how her faith got her through her time in prison and how the Little Sisters of the Poor encouraged her in her education.

Ibrahim, who was eventually released after a global outcry, told the Register that Sister Maria, a Little Sister of the Poor serving in Sudan, predicted that her name would be known worldwide. She also recounted how the sisters and an Italian priest — whom she calls only “Father John” to protect his identity and the safety of his associates — helped get her through her time in prison with her baby son and daughter.

Tell me about the priest who had such a big influence in your life.

Father John is an Italian Catholic priest. He traveled around the city in Sudan. He visited our city, the small city of Ghedaref in Sudan. My teacher told him I am very smart, but I couldn’t continue education, so he offered to help me register at the Comboni High School. I got very high marks and I went to Khartoum University medical school.

I continued my relationship with Father John and then he later became my guardian. In Sudan, we have a legal system that requires girls to have a guardian and I didn’t have anyone. My mom is a woman so she couldn’t be my guardian, so Father John did the court documents. This is where I became more involved with the Church and I worked with the … Little Sisters of the Poor. We went with Father John to the hospital; we helped the sick and offered prayers; he paid medical bills for them.

Especially when I lost my mom it was very hard time for me, because my mom is almost everything. I was so much in need of spiritual support. Father John preferred that I should stay with them and help so that’s what I did. And I really enjoyed doing that. I faced a lot of discrimination at the school, so I would come at the end of the day and tell them exactly what happened — like they called me unclean, all this stuff, even [though] I was very smart, and every time I did something special and succeeded, they would say, “She doesn’t matter.”

One of the sisters there, Sister Maria. said, “Meriam, one day you’re going to do something, and all the world will know you.”

Things happened like that so I’m writing my book now, and I mentioned this — that she prophesied what happened three years after that conversation.

When my case came up, when I got arrested and sent to jail, Father John was the only witness in my case. He was supposed to show up at court on Monday. My lawyer went to meet with him on Saturday. On Sunday, Father John — 53 years old, full of health — collapsed during Mass and passed away. His death wasn’t normal. At that time, NISS (National Intelligence and Security Service) in Sudan was involved in my case. I was betrayed, left alone even, by the lawyer I had at first. She dropped herself from the case because her office had been vandalized by them and attacked.

How did your faith help you in all that time?

We [prayed the] Rosary with my hands and with my fingers. My son was 9 months old, and when we left prison, he was 20 months old. I prayed, and a lot of words from Father John and from the nuns really always helped me a lot. Father always would say we show our faith in action. The way we treat people — that’s how we show who we are. I did pray always and every time I was mistreated. The only thing I would say, as Jesus said on the cross being crucified: “Father, forgive them, for they do not know what they’re doing.” Because those people really don’t know Jesus. They don’t know him.

What is the situation in Sudan and for Christians in Sudan?

Generally, for Christians, it might be a little bit better, but we still we have churches being burned down, vandalized — Christian persecution. We have certain issues still happening. I believe, in Sudan, we can’t ensure full change unless there’s justice and accountability.

The old regime has committed a lot of crimes against the minority, especially in Darfur, in South Sudan. So, without accountability, we can’t ensure peace or much change. The government claims that they abolished the apostasy law, but deep inside, there’s some laws that will end up like the apostasy law. We still have people who face criminal charges based on their religion. You can’t favor [groups] when you want to have religious freedom. As Ambassador [Sam] Brownback said, “Religious freedom is for everyone, everywhere, all the time.” I think we still have a lot to work on.

Tell me a little bit about the work you’re doing now.

I’m a co-founder and director of global mobilization for the Tahrir Alnisi Foundation. It’s an Arabic name — it means, “Setting women free.” We help women who face violence, especially based on their religion — domestic violence at home, or in the community.

I am a board member for Anti-Trafficking International. So, we mostly focus on education, educating people — especially law enforcement and individual students — about how to prevent human trafficking. That’s something my mom used to do before she died.

When I was in prison, one of the nuns would come in because nobody was allowed to visit me except Muslim scholars (so they could come and talk to me about Islam). So, one of the nuns came in wearing a hijab covering her face and holding a book of the Quran. They allow her to stay with me in the room alone. … She stayed with me for an hour. She was holding an Islamic rosary. Because she spoke Arabic, she told them I wanted to talk to her about Islam because they were open to let anybody come and visit.

So she came again after I give birth to Maya and she named Maya, my daughter, “Bakhita,” after St. Josephine Bakhita. She’s the patron of human trafficking. This is one of my daughter’s names. My daughter knows the story of St. Bakhita and she knows that she was named after her.