‘I Got It’: Daughter Offers Perspective on Her Mother’s Decision to Become Cloistered Carmelite Nun 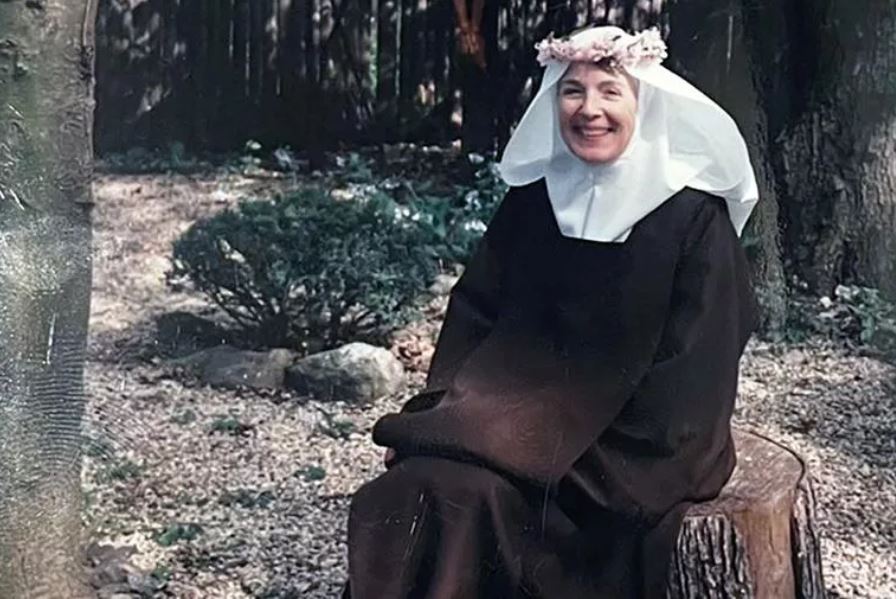 ‘I Got It’: Daughter Offers Perspective on Her Mother’s Decision to Become Cloistered Carmelite Nun

A personal recollection of the late Ann Miller, who in 1989 left behind her public life and 10 adult children to become Carmelite Sister Mary Joseph of the Trinity.

The last time I saw Ann Miller, she was seated behind a grille at the cloistered Carmelite monastery in Des Plaines, Illinois. The fashionable clothes and Elizabeth Arden haircut were gone. Instead she wore a brown Discalced Carmelite habit and black veil. And she was far from the circle of family members and entourage of friends that had defined her life as a wife and mother of 10, and a prominent social and civic figure in San Francisco.

It was a struggle to remember to call her Sister Mary Joseph of the Trinity, the name she received after entering the carmel, for she possessed the same striking vitality, infectious humor, and intense maternal vigilance that had made her an entertaining if occasionally worrisome presence during my teenage and college years. At that time, she kept an eagle eye on the doings of her children and their friends, and did not hesitate to intervene as she saw fit.

Over the years, that impulse became more problematic as her children advanced into adulthood and some made choices she could not support, creating intense friction. And during our conversation at the monastery, Ann suggested I might work with her children to organize a retreat — a reminder that her parental concerns had not waned, though they were mostly channeled into prayer rather than expressed in direct conversation.

When I learned of Ann’s death this week, my thoughts returned to our conversation that day. Mark Miller, her second youngest child, marked her death in a series of often-poignant tweets tinged with frustration that touched on his “complicated” relationship with his mother, but still captured the intriguing mystery of her life’s journey.

A 92 year-old nun died today in a Carmelite Monastery in Illinois. She was kind of an unusual nun. She didn’t sing very well. She was frequently late to her required duties around the convent. She threw sticks for the communal dogs which was not allowed. Also she was my mother.

The second tweet read, “I have only seen her twice in the last 33 years since she joined the convent — partly because the Carmelites are a contemplative order. They don’t teach school, or work in hospitals, or even leave the building in which they live. They pray. They live in silence 23 1/2 hours a day.”

When you do go to visit, you can’t hug or touch. You are separated by an offset pair of double metal grilles. pic.twitter.com/wrWhpJL992

In one tweet, Mark reported that his mother had “28 grandchildren, some of whom she has never seen.”

Other tweets reviewed highlights of his mother’s life preceding her religious vocation: her marriage at age 20; 5 children by age 27; her “million and one friends,” the 1984 death of her husband, Richard “Dick” Miller, a senior executive at PG&E, a public utility; and her fateful decision to enter the Carmel five years later, after her last child graduated from college.

Ann closed that chapter of her life and began her new one at the Des Moines carmel with characteristic flair. As Mark recalled on Twitter, “she had a farewell party with 800 guests at a San Francisco hotel and flew to Chicago the next day.”

Ann was one of my mother’s closest friends, and I got to know her well when our families joined forces for pilgrimages and other trips to the Holy Land, Rome and Salzburg. We also gathered at our homes and on retreats, where her lengthy planning sessions for meal preparation threatened, at times, to undo the spiritual benefits of an otherwise silent program.

I was out of the country when she held her farewell party and did not attend. But those who did celebrated with mixed emotions.

Some thought she was irresponsible and should have stayed close to her family. Others were puzzled by the spiritual call that led Ann to renounce her worldly possessions, and more than a few predicted she would soon give up the rigors of the monastery and return to her old pattern of life.

For reasons I can’t explain, I believed she would stay put. I felt the disciplined solitude of the carmel would offer her a deeper kind of peace than she had experienced in her busy life thus far. And perhaps she had increasingly yearned for the spiritual challenge this new vocation presented, with the promise of a deep spousal relationship with the Lord.

Today, with the benefit of almost 30 years of life experience as a Catholic wife and mother, her decision to close one door and open another remains alternately intriguing and disturbing in its radical nature because it has forced me and all who knew her well to think more deeply about our own paths.

But if some of Ann’s children and friends struggled to accept her decision, others embraced it and adapted to her new life and the restrictions it imposed.

This week I spoke with Janet Miller Abbott, one of Ann’s five daughters and an old high school friend. She had just returned from her mother’s funeral and recalled her own reaction to Ann’s decision to enter a cloistered religious order.

“I got it,” Janet told me during a telephone conversation.

“I really felt a sense of joy and peace, mainly because she was so happy. But that is my DNA.

“Growing up, I wanted to be a Carmelite, too, but I went to the University of Southern California and met my husband, Frank. That was God’s plan, and it has turned out so beautifully. We have eight children.”

Janet also reflected on the mutual love and deep faith that bound her parents together.

“She just adored my father and vice versa. When we were very young, they asked us, ‘Where do you love?’ They were really fishing to see where we were [spiritually]. For them, they put God first, and number two was each other. Number three was their children.”

Once her mother made the decision to enter the monastery, said Janet, “her biggest worry was that they would say, “‘No.’ It is a two-way street: You commit, but the Carmelites have to accept you.

“That’s why there is a five-six year novitiate — to see if you fit into that specific community,” she explained.

Six months after her mother entered the carmel, Janet went for a visit with Ann’s mother. “I wondered how I would feel, and I ended up feeling so at peace. I saw her through the grille and thought, ‘This is where she was supposed to be.’ So when we left, I didn’t say ‘goodbye.’ I never said ‘goodbye’ when I left. I would say, ‘I’ll see you later.’”

During her many visits to the monastery, Janet learned more about the Discalced Carmelites’ way of life and witnessed its impact on her mother.

“The cool thing about the Carmelites is that they pray all day long,” said Janet. Aside from Mass and time set aside for communal prayer, “your whole life is a prayer. Every step you take, every word you utter, every task you take on is a prayer. It is all offered to God.”

Over time, she said, her mother learned to give her maternal concerns over to God in prayer. “Prayer was a way of continuing that maternal vigilance when it was not possible in other ways,” she said.

Her mother also learned to conform to monastic life in other ways, as well.

“For example, they are supposed to keep their hands under their scapular. They only use them when they need to,” said Janet. “So when we visited her the first time, her hands kept waving just as they always did.” One of the nuns signaled for her to put them away, and her mother did her best to comply.

“The next time I came, her hands did not come out. But underneath her scapular, when she started to get animated, you could see her arms moving. I said ‘Mom, what are you doing?’ She said, ‘I am trying not to talk with my hands so I am gripping the sleeves of my habit.’”

Over the years, Janet brought her own children to see their grandmother, who, in turn, would send holy cards for birthdays, graduations and First Holy Communions.

“My children were all accepting of her and have developed their own relationship with her. They went to Catholic schools, so they understood why she was where she was,” she said.

“When mom started going downhill a bit, they all went to visit her separately on their own, including my 25-year-old daughter, who was born six years after my mom went into the carmel,” she said.

Some of her siblings have done the same, while others have struggled to resolve their issues with their mother’s decision.

As Janet sees it, her own strong faith has helped her joyfully embrace her mother’s religious vocation.

Two weeks before her mother’s death, Janet knew the end was near and traveled from San Francisco to Chicago for what she feared would be her last visit.

By now, the once-energetic woman who had been an open-water swimmer and globe-trotter was frail and could barely speak. But she was at peace. And this time, when Janet departed, she said “goodbye” to Sister Mary Joseph of the Trinity, her mother, for the first and last time.

When Janet returned for the June 9 funeral service, she felt “no sadness, only joy and peace. I had a sense of elation for her. … And now she is with God in heaven and with all who have gone before.”

Her mother’s story has fascinated many people, Janet acknowledged. But every woman who shared the carmel with Sister Mary Joseph of the Trinity “has a story about how God worked in their life. The key is you have to be listening” to hear the call.

The story of St. Anthony of Padua’...