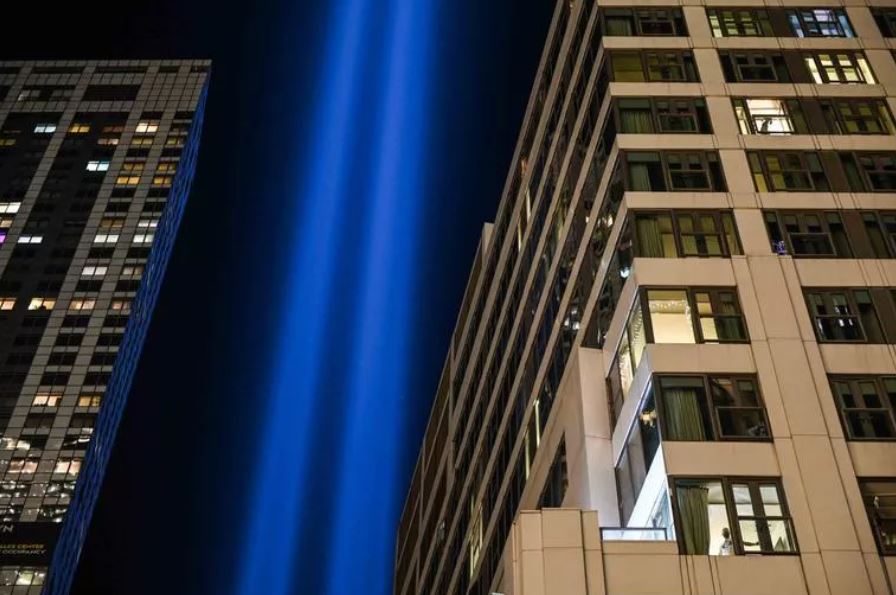 After the attack on our country I left Islam and held religion in disdain. But against the odds, I would come to learn that God became flesh and dwells among us.

Where were you when you found out?

I was a freshman in Ann Arbor. Classes at the University of Michigan had begun on the previous Tuesday. I’d just settled my rear onto a seat in a small classroom where my Urdu class (one of those easy A’s to boost my G.P.A.) was held that morning.

A young woman, who wore the hijab, was seated near me. She turned to the young woman seated next to her. “My roommate started freaking out when I was leaving the apartment,” I overheard her say. “She was telling me that the Empire State Building just got hit by a missile.” She rolled her eyes and grinned. “Gee, I wonder who they’re gonna blame for this one,” she sarcastically said.

Our class began a minute or so after I’d overheard this. Throughout that hour I could hardly focus, with my mind haunted by images of a missile stabbing into the iconic tower and exploding as in a disaster film.

Our class finally ended. I stood up, tossed my belongings into my bag, and poured out of that classroom. I hurried down State Street and made my way into the Michigan Union Building. There was a semicircle of fellow students standing around the television next to the food court, staring at it in disbelief. We watched the images of dark smoke rising from the North Tower. The caption at the bottom of the screen read that the South Tower had already collapsed. Reports began pouring in that the Pentagon had been struck as well.

I vividly remember almost every detail of that day, of where I was, and what I was doing — watching coverage at my cousin’s apartment while the North Tower crumbled down, arguing in that apartment with my cousin’s friend (who was a fellow Muslim) who’d suggested that our country had it coming, startling one of my roommates by violently flinging my bookbag onto the floor of our dorm room as soon as I’d entered, attending a candlelight vigil that night on Central Campus, holding a stranger’s hand while a group of us sang patriotic songs such as “America the Beautiful” at the end of the vigil. And I remember waking up the next morning sad that it hadn’t all been just a bad dream.

Most of us can remember exactly where we were, and what we were doing, when we learned about the attacks. Many us lost friends and loved ones on that day, or at least know someone who did. Some among us were even there.

Franciscan Brother Raymond Cooney, a good friend of mine from the New York area, had signed a separation agreement with Carr Futures, the company where he’d been working for many years, after they’d opted to part ways with him. “It’s my last week, and I’ve already handed over my responsibilities,” he figured to himself. “I’ll just get to the office by nine o’clock, instead of my usual eight.”

The offices of Carr Futures were on the 92nd floor of the North Tower. Smoke was rising from the North Tower when he’d arrived at Ground Zero, though no one around him seemed to know exactly why. A co-worker of his, who was standing next to him, received a message on his pager from another colleague who was trapped in an elevator. When Raymond squinted his eyes at the tower, he could see the silhouetted figures, what he knew were people from afar, jumping out from windows. It was just then that he heard the terrible explosion, and saw the immense fireball emanating from the South Tower. His instinct to survive immediately directed his steps toward the Brooklyn Bridge.

Seventy-two of Raymond’s colleagues perished when the North Tower collapsed. He remained with Carr Futures for several weeks past his separation agreement so that he could provide consolation, on a daily basis, to grieving family members who went to a comfort space the company provided in the Waldorf Astoria Hotel. He listened to the grieving families, and heard the stories of beloved and departed colleagues, while knowing that he himself had survived only because the company just happened to be releasing him that very week.

“God has another plan for you,” his next-door neighbor had told him Sept. 12.

The survivor’s “why?” guided him to deepen his own Catholic faith. The experience of consoling grieving families led him to become active in the consolation ministry at his local parish. He was inspired him to explore the Third Order of St. Francis and eventually became a Secular Franciscan. Raymond was the formation director of the St. Benedict the Moor Fraternity, in New York, when I myself was professed a Secular Franciscan in 2015.

The personal story of Brother Raymond is one of having escaped untimely death by a narrow margin. But most of us, throughout our country, were simply going about our day, when we were suddenly shocked by the realization that it was no ordinary Tuesday. We collectively shared the emotional waves of fear and grief and anger, and by the end of that night we were prouder than ever to call ourselves Americans. Tragedy had bound us together, and the camaraderie immediately afterward was a beauty that had risen from ashes.

I was already a proud American, and very much so, when I’d woken up on that morning of Sept. 11. I was proud of my country’s short history, of how she served as a great beacon of liberty and opportunity. I was especially proud of my relatives on my father’s side of the family who’d participated in that great struggle to secure the world’s freedom from the dark designs of Nazi Germany and Imperial Japan.

I was likewise a proud Muslim when I’d woken up that morning. I was proud of my “more logical” faith’s early history, of Muhammad’s ascent from an “illiterate” merchant to the founder of a vast empire that had spread so much learning throughout the world — the historical “proof” that God rewards worldly glory to those who submit properly to Him.

I’d met other fellow American Muslims who, like me, saw no contradiction between patriotism and private practice (or hardly practicing, in several cases) of our faith, and had no desire to impose our religion upon non-Muslim friends. I’d also met other fellow American Muslims who’d professed their loathing of our country’s culture (especially any of the depravity which they sought to shield the Muslim youth from), loathing of our country’s foreign policy (especially concerning Israel), and who looked down upon our non-Muslim neighbors as hell-bound kafirs. By then I’d often wondered why, regardless of the economic opportunities, anyone emigrated to countries which they’d felt such contempt toward.

It seemed clear to many of us, patriotic Muslims, that much of this contempt and blame was largely driven by envy. The Muslim world seemed so fractured and failing in our own day while a “depraved” and “infidel” nation wielded such power in world affairs, as well as so much cultural influence, which the Ummah was “supposed” to have. Comparing our modern failures to the feats of the Sahabah could be anguishing.

And who, among any of us, could have imagined that for years we’d unwittingly aided the exportation and proliferation of Salafism, a very retrograde interpretation of Islam, simply by doing the everyday chore of pumping gas into our cars?

Many of my fellow patriotic Muslims and I often rolled our eyes at this common impulse to blame all of the Muslim World’s problems on “the West” or “the Jews,” figuring we’d just have to agree to disagree with so many of our brothers and sisters in faith. All of us remained oblivious to any plans being concocted, in a backwater country ruled by a backward regime on the other side of the world, to attack our country on her own home soil.

And then suddenly, my country had been attacked by men who’d acted in the name of my faith. An ancient war, between Islam and the rest of the world, which I’d previously assumed was buried in the past, didn’t seem so distant any longer. And for the very first time, I wondered about the history of my faith which I myself had taken such pride in, and asked: “Are we the bad guys?”

“What god would ever desire a thing like this to happen?”

It added so much to the bitterness of that day for me.

I wanted to see my country avenged for this. It was far easier for me to hate back then, to see human persons as enemies rather than the beliefs which they’re possessed by, and so I hated Osama bin Laden, and all of his sympathizers, just as they’d hated my country.

It didn’t occur to me back then that the men who’d hijacked those planes had been born blameless, with the blank slates of infants, just like you and me. The vision of a majestic God, who wanted them as slaves, and yet never as sons, had been planted into their minds, just as it had been for me.

And so they did what they did because it was the “right” thing to do according to what they’d been taught. Enough indoctrination can make any act seem justifiable, and so thousands of our countrymen (with Muslims among them) were murdered simply for having shown up to work.

Our understandings of God carry with them implications, and also consequences. The same is also true for the way each of us live our lives. The memories of this dark day will always be a reminder of this.

“Father, forgive them,” Our Lord pleaded, on all of our behalf, after having been nailed to the cross, “for they know not what they do.”

By the time I’d learned of Osama bin Laden’s own demise at the hands of SEAL Team 6 in May 2011, much had changed for me. If I had been the president at that time, I would’ve signed that same order for the sake of duty, in the interest of national security. But I took no particular delight in the news, nor feel any compulsion to go out and celebrate, as I would have only a few years prior. He’d lived by the sword, and died by the sword, and that was all there was to it.

This attack on our country did much to help me realize the implications of the belief I’d been raised with, in a distant god who’d long ago given charge to conquer and colonize surrounding lands. I’d left Islam, assuming that all religions were poisonous — grand excuses to divide humanity even further. Such a belief also very much has implications, and consequences. But against the odds I’d learned that our God dwelt among us, and remains so very eager to dwell within us.

Where was God when this happened?

He was there, calling one bitter young man who’d found himself having to figure out whether his loyalty to faith or country was greater, even though that young man had no idea at the time.

The True God never demands the infliction of suffering upon others, and is very much ready to suffer along with us. We have the cross, including the Ground Zero cross which was found among the debris, to look upon as an everlasting reminder of this.

Engaging Your Faith With Beeswax C...