In a World Gone Mad, What Would St. John Paul Do? 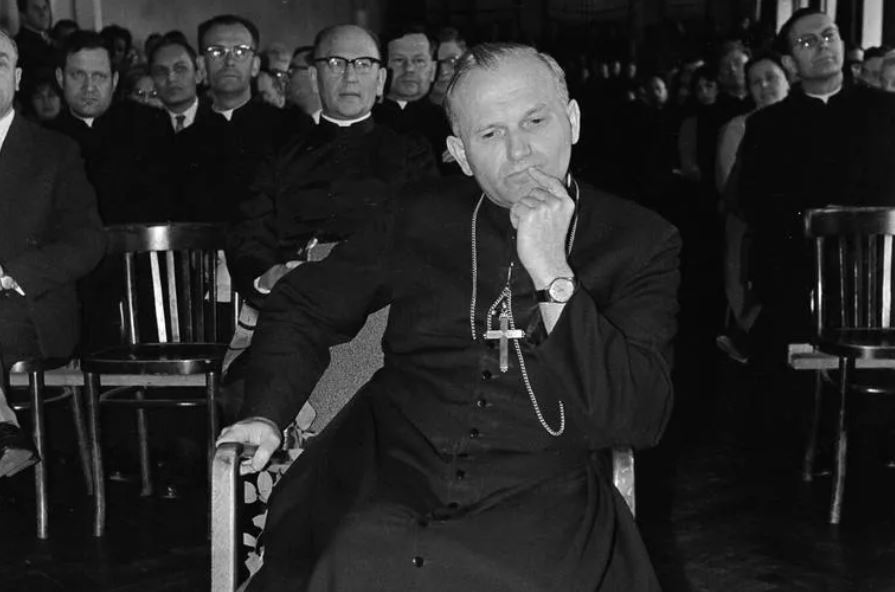 In a World Gone Mad, What Would St. John Paul Do?

COMMENTARY: Father Karol Wojtyla faced harder times than ours, and he answered them by building an ‘extraordinary network of friendship’ that helped transform not just Poland but the worldwide Catholic Church.

“WWJPD,” I scribbled frantically on the piece of paper. “What Would John Paul II do?”

I poked my wife, pointed at the paper, and then frantically tried to get the moderator’s attention.

We were at the final talk in a Catholic conference, listening to speakers explain, with increasing alarm, that Catholics in the United States face overwhelming odds against enemies who are destroying everything we believe.

One speaker talked about the decadence of every sector of American life. Another showed how Plato’s warnings about greed leading to tyranny are coming true. This last one described how children who were hurt and confused were being coerced into making a life-altering decision to change their bodies, and how the Equality Act, backed by the nation’s leading Catholic politicians — the Speaker of the House Nancy Pelosi and President Joe Biden — wanted to lock that coercion into law.

The talks were great on analysis, but light on “What do we do now?”

They never called on me, and that’s probably just as well. I was planning to be one of those “I have a comment more than a question” guys who grabs the mic and holds forth. And I don’t want to be that guy.

But what I wanted to say was this: St. John Paul II, when he was just Father Karol Wojtyla in Poland, faced harder times than ours, and he did more than worry about them at conferences. He answered them by building an “extraordinary network of friendship” that helped transform not just Poland but the worldwide Church.

We have Pelosi and Biden’s plans for the U.S. That’s bad, but it’s better than having Hitler and Himmler’s Nazis take over your country and create Auschwitz 40 minutes away from your home. We hope sanity might return in future elections. Political change came for Poland on “Liberation Day,” which the nation’s new communist overlords made a compulsory holiday while suppressing Catholic feast days.

We Americans face the “great unfriending” as loved ones have left us because of political disagreements. John Paul faced betrayals by friends to the authorities and saw allies “disappear” by the Communist Party — and he faced it all with nothing but the graves of his beloved father, brother, sister and mother to turn to.

And what did he do? He built a community of friends that changed the world.

Biographer George Weigel tells the tale. In his Witness to Hope sequel The Beginning and the End he described how the young priest, laboring under an oppressive Marxist regime, created “zones of freedom.”

These were cells of community, faith and scholarship. He got groups together to put on plays in town or go on outdoor expeditions. He gave them retreats, marriage preparation, and days of recollection to teach them to pray. He organized seminars on St. Thomas Aquinas and other works. Significantly, they sang together.

Most of all, he made friends with them. “While he was among us, we felt that everything was all right,” one member of the group that came to be called Środowisko (Milieu), told Weigel. “We felt we could discuss any problem with him; we could talk about absolutely anything.”

As Weigel describes it, this was the ultimate end-run around the obstacles set up by the communist authorities. This wasn’t a political counter-conspiracy designed to subvert the government’s total control of schools, media and institutions. It wasn’t a “resistance” movement preparing to take up arms if necessary. This was something far more dangerous, says Weigel: a group of friends rediscovering love of neighbor, love of God and love of truth.

What they came to recognize is that the enemy they faced was not as almighty as they thought. Benedictine College theologian Andrew Salzmann helped me see the parallels between the errors John Paul faced and the errors we face: The Marxist framework was built on lies about the human person — lies that reduced us to economic beings with no transcendent purpose; today’s errors turn us into Nietzschean self-creators, a task which is too much for most of us. An intellectual framework built of thin reeds is bound to collapse, and the Soviet bloc eventually did. Father Wojtyla’s friends were unwittingly building the relationships from which a new culture could emerge once it did.

The best part about it is that what was required of them was not a tortuous intellectual exercise of diving into minutiae and unending micro-arguments. What was required was going on hikes with neighbors and showing concern and interest for each other and discussing ideas that were a balm to their hearts.

Looking back at my own life, the most effective Christian apostolates I have been involved in weren’t self-styled movements to build the kingdom of Christ through tactical pseudo-friendships with leaders, but informal events building real friendships with neighbors, events focused on community, faith and scholarship.

As for community: For years, my wife and I hosted “The Hoopes Family’s Ambitious Schedule of Summer Cookouts,” in which we invited friends and neighbors to join us in our backyard every Saturday after 4, bringing something to eat and something to share. Remarkable things happened at these events: People found jobs and spouses and made lifelong friends. The Catholic Beer Club is a great more formalized version of the same thing today.

As for faith: My friends and I started “What’s at Stake Seminars” to discuss the claims of the Catholic Church with Protestants. More recently, I have fed my faith with random neighbors at my parish’s That Man Is You group, Great Adventure Bible Study Group and our Teams of Our Lady group. My life would be different without them.

As for scholarship: A friend’s “SOBs” (“Sons of St. Benedict) reading group was a huge help to me here in Atchison. Formal groups like “The Well Read Mom” and Word on Fire study groups do the same thing on a wider scale.

What do these groups do? They start by simply answering the human need we all have for human companionship. The best of them will feel like an oasis in the week, not a burdensome add on. They force us outside ourselves, and once we open up to others, we find unexpected answers to our personal problems and surprisingly deep joys.

But if enough of us do this, something more will happen: We will find strength in the power of ideas, confidence in knowing that we aren’t alone, and courage to start sharing the truths of the human person with others in our parishes, neighborhoods and workplaces.

At Pope John Paul II’s funeral, directly behind the world’s heads of state sat a motley group of Poles wearing outdoor gear because they had slept outside. These were members of the network of friends Father Karol Wojtyla gathered decades before. Together, they sang a song they used to sing with him in the mountains.

Think of them next time you feel hopeless about the future.

Imagine you’re a Catholic in the Soviet Bloc, hemmed in by the communists who have captured every institution around you. Then do what they did: First, say “Be not afraid!” then invite your friends to go kayaking, talk about God and sing.

After China retaliates with sancti...