In Joy and Sorrow, Newlyweds Discover St. Joseph as ‘Pillar of Families’ 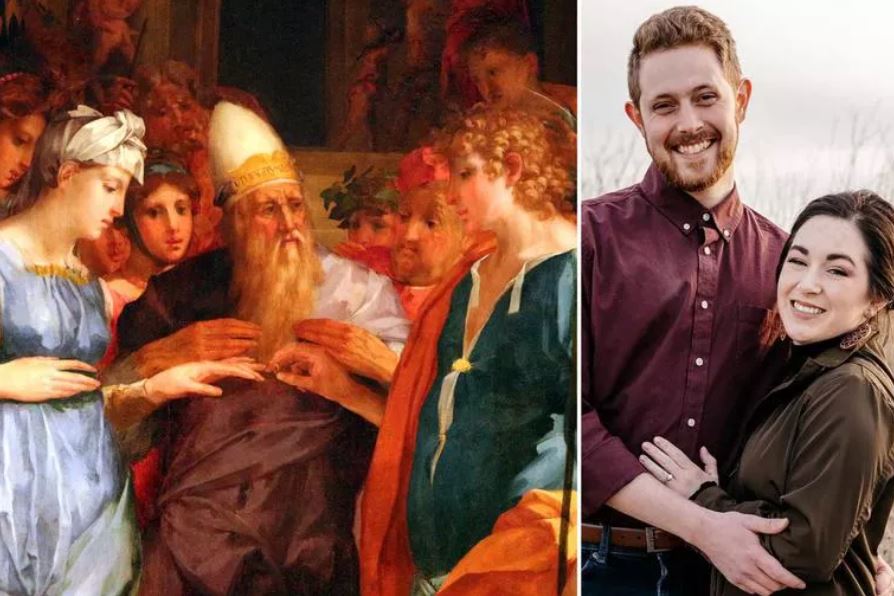 In Joy and Sorrow, Newlyweds Discover St. Joseph as ‘Pillar of Families’

Before getting married, Sam and Casey Shays took St. Joseph into their hearts, and St. Joseph responded by taking the couple under his special care.

The statue of St. Joseph that Sam and Casey Shays keep on their bedroom dresser reminds the newlyweds of their patron’s support this past year as they’ve prepared for marriage, faced sudden tragedy and begun their married life together.

“St. Joseph played a really big part in our relationship,” said Sam, 24, of Victoria, Minnesota.  “He had a big impact on me just even conceptually of who he was,” he said. “There’s a lot of beauty in being a faithful married person.”

Both originally from the western part of the Minneapolis-St. Paul metro area, Sam and Casey met in 2015. They shared a common faith, though Sam had questions. “As we grew as friends, as people, I started to take a really good look at faith again,” he said. “I saw so much beauty, timeless beauty,” said Sam, a human resources talent advisor.

“I think [Sam] said something like, ‘we can’t pass up an opportunity to deepen our devotion to St. Joseph in the Year of St. Joseph before we get married,” said Casey, 30, who had prayed to the saint earlier while looking for work and was hired as a middle school reading teacher at St. Joseph Catholic STEM School in Waconia, Minnesota.

“It’s almost like we’ve been in the shadow of St. Joseph in a good way throughout our relationship during my working life and onto this day as well, and it’s manifested itself in other ways too.”

The couple had prepared to make their consecration on the Solemnity of the Immaculate Conception last year. But the night before, on Dec. 7. 2020, Casey’s father died suddenly of a heart attack.

“That was really unexpected,” Casey said. “It was a horrible shock. But I just remember that we were asking St. Joseph for prayers specifically and that he’s the patron of a happy death.  That ended up carrying a lot more significance in knowing that we have him as a spiritual father as well.”

Through their grief, Casey and Shay went ahead with the consecration on the feast day. They found consolation in their relationship with St. Joseph while also reflecting on the pain Jesus must have felt when he died.

“The loss that I personally believe [Jesus] experienced was a real one,” she said. “It must have been so painful for him. Being close to Christ in that way and just thinking about supporting my family like Jesus must have wanted to support his mother and family — that’s been giving a lot of food for reflection and prayer.”

On the couple’s wedding day in July, their joy was mingled with the pain of loss as Casey’s godfather walked her down the aisle instead of her father. Seeing St. Joseph’s statue near the altar was a comfort, she said. “Even just having him there and just looking down on us really felt right and kind of helped bring us full circle.”

Lilies on the altar represented their patron and his role in their relationship, Sam said.

Even though faith shows us this life isn’t the end, the pain is real, Casey said. “I’d never known what it was to lose somebody so close to me, until my dad died so suddenly,” she said. “To realize how senseless and painful it is. It’s almost like losing a part of yourself.”

While healing from the loss, the couple have continued to experience their patron’s intercession, including his help in finding an apartment.

During his first months of marriage Sam said he’s been drawn to St. Joseph as a model husband and father. This is evident, he said, in the kind of man Jesus became. “The man that Joseph raised and the man that Joseph was day-by-day with Mary and to his community,  I think that is much more where he comes in as a patron for us, looking out for us, interceding for us and being a model for me especially of how to live life.”

The Shays continue to pray to St. Joseph and find comfort in knowing he’s there in good times and bad, Casey said.

“In a special way we really see Joseph as our spiritual father, and we believe that he is praying for us.”