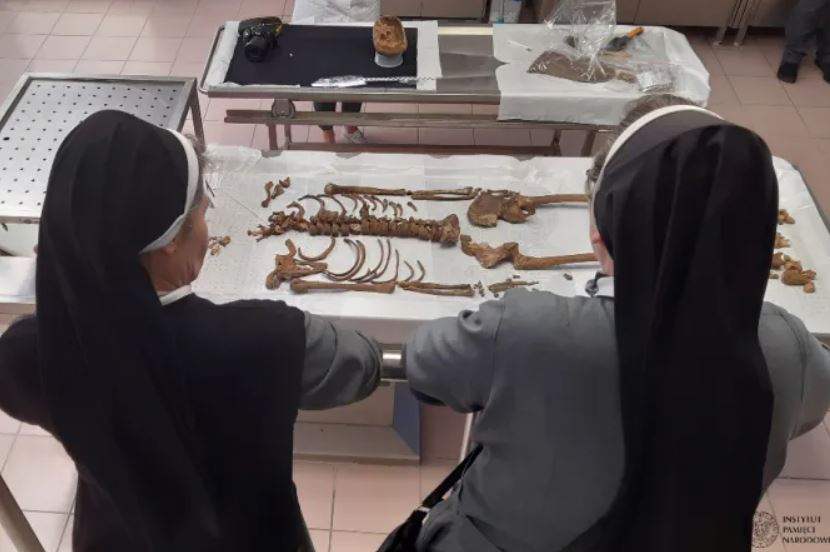 Sr. Maria Gunhilda was recovering from tuberculosis at a hospital in Orneta, northern Poland, when the Red Army arrived.

It was 6 a.m. on Feb. 15, 1945, when soldiers entered the building. They were on their way to Berlin, where they would topple the Nazi regime. But they did not act as liberators inside the hospital in Orneta. Far from it.

Sr. Maria Gunhilda (born Dorota Steffen) was the youngest of seven children. Shortly after her 18th birthday, she entered the Sisters of St. Catherine, founded by the 16th-century Polish nun Bl. Regina Protmann.

The Soviet soldiers, raised in a militantly atheistic state, attacked the young sister when they discovered her in one of the hospital’s rooms.

In the melee, she was shot three times, in the chest, collarbone, and forearm. Blood gushed out of her wounds, soaking her clothes and bedsheets.

Her fellow sisters were able to dress the wounds but with great difficulty because of a shortage of bandages and medicine.

She lived for three more months. Witnesses said that she was completely reconciled with God’s will, accepting her suffering without complaints. She passed away on May 30, 1945, aged 27, in what one sister described as a very edifying death.

Sr. Maria Gunhilda was buried in Orneta along with Sr. Maria Rolanda (born Maria Abraham) and Sr. Maria Bona (Anna Pestka), who had equally gruesome deaths at the hands of Red Army soldiers. After that, the young sister was lost to history.

Until December 2020, that is, when members of the Office of Search and Identification at Poland’s Institute of National Remembrance arrived in the town not far from the Russian exclave of Kaliningrad.

Fr. Tomasz Trzaska, director of the institute’s independent information and reporting section, told CNA in an interview that researchers searched for the bodies based on a hand-drawn map of burials.

“We knew that the remains of the three nuns were under the later burials of priests and civilian people,” he said.

His team dug in an area of the cemetery reserved for the Sisters of St. Catherine. They discovered bones surrounded by religious items such as crucifixes. They identified remains that were likely to be those of the three sisters and took them away for further tests.

The project began when a priest, Fr. Arkadiusz Czaja, O.F.M., sought expert help from the Institute of National Remembrance. The archbishop of Warmia, an archdiocese in northeastern Poland, had delegated him to work on the beatification process for 16 Sisters of St. Catherine who died between Jan. 22 and Nov. 25, 1945.

“Previously the Sisters of St. Catherine tried to obtain the appropriate permits on their own. Unfortunately, the difficulty of finding the burials and identification of the discovered remains made the matter too difficult to carry out on their own,” Trzaska recalled.

“The tasks of the Institute of National Remembrance include the search for the remains of the victims of the Nazi and communist regimes, as well as ethnic cleansing, so the request was accepted, and all search activities, including archival research, were taken over by our office.”

Based on the scant information available, Trzaska’s team believed that one of the sisters was buried in a former cemetery in Brętowo, on the outskirts of Gdańsk, the city where the strike that ultimately toppled communism began.

They thought that three other sisters lay in a cemetery in the city of Olsztyn. Finally, there were the three sisters in Orneta.

Trzaska said: “In practice, it was only in Gdańsk that we could talk about a named grave — but there was no certainty here as well. In other locations, our search involved examining a larger area, and sometimes there was a need to exhume the bodies of people buried in these places in the following years.”

In July 2020, the team had a chance to put its theories to the test. The whole group — archeologists, nuns, and priests — assembled for the first time in Gdańsk. Before the works began, they took oaths and Fr. Czaja outlined the duties of those hunting for the remains of possible future blesseds.

They then began digging for the body of Sr. Maria Charytyna (Jadwiga Fahl), who died after being beaten by Red Army soldiers while attempting to protect her fellow sisters from assault.

“In the case of the remains of Sr. Charytyna, we knew that if they were not in the marked grave or in the immediate vicinity, we would be disappointed at the very beginning and the next difficulties in the search would be announced,” Trzaska recalled.

“Fortunately, it was different. In the grave, we found the remains of a woman, along with items of clothing, a rosary, and a cross that the sisters used to carry in the pocket of their habit. We felt joy and relief.”

“In order to find the remains of the sisters we were looking for, we selected an area of about 80 square meters [around 800 square feet],” the priest said.

“After removing the top layer of soil, it turned out that in this small area there are the remains of over 30 people.”

“If we had explored the entire area of the former cemetery, we would have certainly discovered several dozen — or maybe several hundred — more burials.”

“The next step was to determine which remains could belong to the nuns that we were looking for.”

Finally, the team reached the last of the three sites — Orneta — in the dead of winter. The researchers wanted to dig there earlier in the year, but they were slowed down by the coronavirus pandemic and the complexity of obtaining permits.

CNA asked Trzaska how the team could be certain that the seven bodies uncovered in Gdańsk, Olsztyn, and Orneta were those of the slain sisters.

“The way to confirm identity is always the same in the case of the IPN Search and Identification Office,” he said. “First, we try to find the remains based on the alleged burial place, circumstances of death, injuries, etc. We are assisted in this by historical documents, witness accounts, and archival documents.”

“The next step is to collect the remains and [perform a] preliminary anthropological examination, which allows us to determine whether the found person has characteristics similar to the sought person: height, age, sex, injuries. Items found in the grave are also helpful.”

After that, the team conducts a full anthropological examination at the Department of Forensic Medicine, during which a bone sample is taken for genetic testing.

“At the same time, we try to identify the relatives of the searched person in order to take a sample of the genetic material from them,” he said.

“Only genetic identification provides certainty in establishing the identity of the person whose remains we have found.”

The final stage of the anthropological examination of the remains was completed last month. The bone material is undergoing DNA testing in an attempt to match it to the sisters.

The Office of Search and Identification is the only entity in Poland apart from the police that uses the FBI’s proprietary Combined DNA Index System (CODIS), which can significantly speed up identifications.

Fr. Czaja has been present at all stages of the project, as have Sr. Angela Krupińska and Sr. Patrycja Paśko, Sisters of St. Catherine who are also working on the beatification process.

Reflecting on the historical significance of the team’s discoveries, Trzaska said: “We do not know the reasons why the Soviets murdered innocent sisters. However, the cruelty and torture to which they were subjected make it possible to conclude that they were victims of religious hatred.”

“We have descriptions of brutal torture to which they were subjected. Not only were their lives taken from them, but also efforts were made to deprive them of their female dignity, which in the case of religious sisters must have been particularly painful.”

He continued: “Let the memory of their conscientious and dedicated work for the sick and the poor, as well as their bloody martyrdom, be a warning to future generations.”

“Let their intercession — as blessed ones — be a support for everyone in boldly proclaiming the truth and sincere service to people. And for the Office of Search and Identification, it should additionally be a support in the daily effort of searching for hidden remains and restoring their lost names and memories.”

Pope Francis Believed to be Prepar...