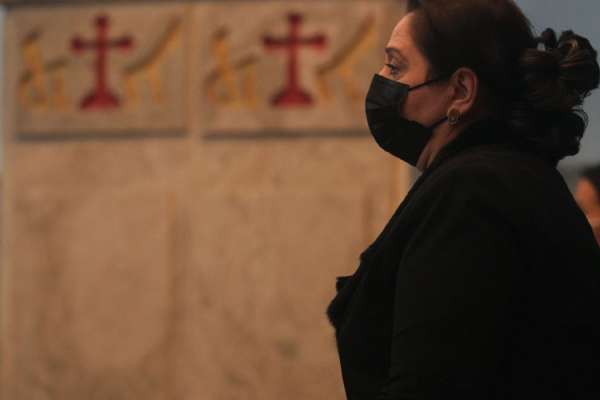 Rome Newsroom, Feb 15, 2021 / 06:30 am (CNA).- The Iraqi government has announced new COVID-19 restrictions, including the closure of all places of worship, less than three weeks before Pope Francis’ scheduled trip to Iraq.

On Feb. 14 the health ministry of Iraq wrote that the government will impose a national curfew, in addition to the closure of all schools, restaurants, mosques and other places of worship.

These measures come in the weeks leading up to Pope Francis’ March 5-8 trip to Iraq. The pope’s schedule includes a Mass at the Chaldean Cathedral of Saint Joseph in Baghdad on March 6 and a visit to the Syriac Immaculate Conception Cathedral in Bakhdida March 7.

Most of the new coronavirus measures will go into force from Feb. 18 until March 4, but the closure of places of worship is “until further notice,” according to the Iraqi government’s website. The national curfew will remain in place until at least March 8.

The Vatican’s ambassador in Baghdad, Archbishop Mitja Leskovar, met with Iraqi Prime Minister Mustafa al-Kadhimi on Feb. 14 to discuss the preparations for the pope’s visit.

Al-Kadhimi said in the meeting that Iraq’s government welcomes the pope’s trip and his efforts to counter extremism in the country, according to the Shafaqna Shia News Agency.

Pope Francis is slated to meet with Al-Kadhimi immediately upon his arrival in Baghdad on March 5 before traveling to the presidential palace to visit Iraqi President Barham Salih.

The papal trip has faced some opposition within Iraq. The populist Shiite cleric Muqtada al-Sadr addressed this opposition and underlined his approval of Pope Francis’ upcoming visit in a Tweet on Feb. 13.

“I have heard there are opponents to the visit of the pope to our beloved Iraq. I say openness to religions is desirable and this visit is welcome,” al-Sadr wrote in Arabic. The cleric has over 1.3 million followers on Twitter.

“Najaf is the capital of religions, so he is welcomed as a peace-lover,” he wrote.

During his visit to Iraq, Pope Francis is scheduled to meet with Ali al-Sistani, leader of Shia Muslims in Iraq, in Najaf on March 6.

The pope will then travel to the plain of Ur in southern Iraq, which the Bible records as the birthplace of Abraham. In Ur, the pope will give a speech at an interreligious gathering.

A priest in Iraq has noted that the national coronavirus restrictions in Iraq should not apply to the northern autonomous region of Iraqi Kurdistan, where Pope Francis is scheduled to go on the last full day of his visit.

The pope will be welcomed at the Erbil Airport March 7 by the religious and civil authorities of Iraqi Kurdistan before traveling to Mosul to pray for the victims of war at Hosh al-Bieaa square.

Pope Francis will visit Christian communities in the Nineveh Plain and will offer Mass at a stadium in Erbil. These Christian communities suffered greatly under occupation by the Islamic State from 2014 to 2016, causing many Christians to flee the region. The pope has repeatedly expressed his closeness to these persecuted Christians.

The papal visit to Iraq will be Pope Francis’ first international trip in over a year due to the coronavirus pandemic.

The Iraqi health ministry confirmed the first case of the new strain of the coronavirus at a press conference on Feb. 15, according to the Turkish Anadolu Agency.

Pope Francis received both doses of the Pfizer-BioNtech coronavirus vaccine earlier this year. All Vatican journalists and security personnel traveling with Pope Francis on his trip to Iraq are also required to get the vaccination against COVID-19.