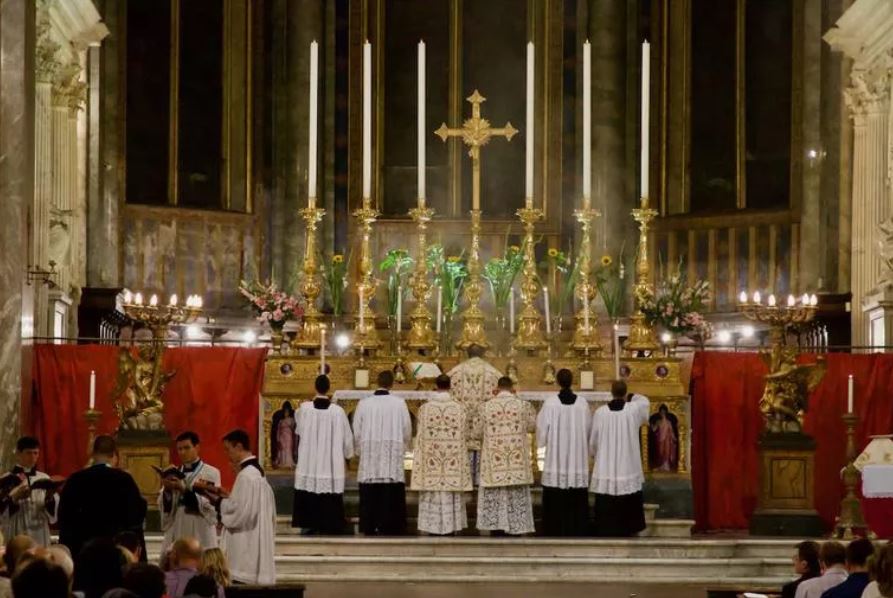 A Mass in the Extraordinary Form celebrated in the basilica of Santa Maria sopra Minerva in Rome, Sept. 15, 2017. (photo: Edward Pentin / EWTN)

The Holy Father reportedly told Italian bishops at a closed-door session of their plenary meeting on Monday that the document is in its third draft.

VATICAN CITY — A new Vatican document is allegedly being drafted that will restrict the celebration of Mass in the Extraordinary Form of the Roman Rite, otherwise known as the Traditional Latin Mass.

On Tuesday, the Italian-language blog Messa in Latino reported that a “third draft of a text” has been reached “that contains restrictive measures regarding the celebration by Catholic priests of Mass in the Extraordinary Form.”

The blog reported (see English translation here) that Pope Francis allegedly disclosed the information about the document behind closed doors at the opening of the 74th general assembly of the Italian bishops’ conference in Rome on Pentecost Monday.

He reportedly told Italian bishops that the document would change Benedict XVI’s 2007 apostolic letter Summorum Pontificum that made the Extraordinary Form widely available. The letter, he allegedly said, was only meant to meet the needs of the Society of St. Pius X, whereas today many young priests want to celebrate Mass in the traditional rite, perhaps not even knowing Latin.

The possible measures reportedly require priests return to obtaining prior episcopal or even Vatican authorization to celebrate Mass in the Extraordinary Form, as happened pre-2007, although those communities already celebrating Mass in the older form would be able to continue to do so.

At the meeting on Monday, the Pope publicly repeated his concerns over what he called rigid seminarians — an observation he has made before in the context of clergy who adhere to tradition. “We have seen, frequently, seminarians who look good, but who are rigid,” he told the bishops. “Rigidity is not of a good spirit; behind that rigidity there are some big problems.”

The Holy See Press Office did not respond to Register inquiries about the matter, and an official in the Congregation for the Doctrine of the Faith said he was unaware of the document. However, high-level sources in both the Roman Curia and the Italian episcopate confirmed the Pope’s comments to the director of Messa in Latino, Luigi Casalini.

“Our sources are three bishops who were present at the two speeches of the Holy Father and two senior officials of the Roman Curia,” Casalini told the Register May 27. “I confirm that the draft exists and is being examined — the Pope has confirmed that he has read it.” The Italian daily newspaper Il Giornale also reported on the story on Friday.

Until 2007, celebration of the Traditional Latin Mass that existed prior to the liturgical reforms of Pope Paul VI had only limited permissions, but with the authority of Summorum Pontificum, any stable group of faithful attached to the “previous liturgical tradition” could ask their local priest for the Mass, and he “should willingly accede to their requests.”

The decree stated that the older form of the Mass was “never abrogated” and that both the Extraordinary and Ordinary Forms were “two expressions of the Church’s lex orandi,” or rule of prayer, that “will in no way lead to a division in the Church’s lex credendi (rule of faith); for they are two usages of the one Roman rite.”

Benedict XVI also made clear in his 2017 book interview Last Testament with Peter Seewald that the rehabilitation of the old Mass was certainly not meant as a concession to the Society of St. Pius X but as a way for the whole Church to be “one with herself inwardly, with her own past; that what was previously holy to her is not somehow wrong now … There are two different forms, one and the same rite.”

Reports of a possible document follows other indications that the Extraordinary Form may be vulnerable to future restrictions. In January 2019, the Pope issued a papal decree suppressing the pontifical commission Ecclesia Dei and its work was transferred to a “special section” of the Congregation for the Doctrine of the Faith (CDF). The pontifical commission was the office of recourse in the event of difficulties or obstacles in providing the traditional Mass, as well as the section charged with helping to bring the SSPX back into full communion.

Then, last year, the CDF sent a letter to the presidents of bishops’ conferences worldwide asking them to distribute a nine-point questionnaire about Summorum Pontificum. CDF prefect Cardinal Luis Ladaria said the survey was issued because the Pope wanted to be “informed about the current application” of the apostolic letter.

But given Benedict XVI’s efforts to try to reconcile the two forms by rehabilitating the Extraordinary Form, sources in Rome believe it is unlikely that the alleged document, if it ever appears, will be published while the Pope Emeritus is alive.

Some opponents of the Traditional Latin Mass largely view it as divisive, an obstacle to progressive reform of the Church that is contrary to the liturgical reforms that followed the Second Vatican Council. For these reasons, certain groups within the Italian bishops, a pontifical university in Rome, and the Roman Curia are hostile to the Extraordinary Form and, according to the French traditional website Paix Liturgique, “are dragging the Pope into a major political mistake.”