Jan Figel: ‘It’s a pity there is no EU religious freedom envoy anymore’ 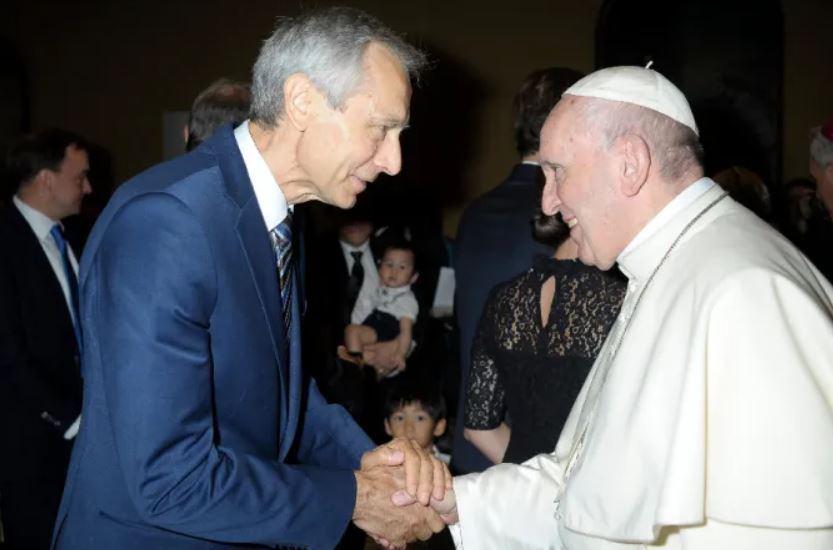 Jan Figel: ‘It’s a pity there is no EU religious freedom envoy anymore’

Ján Figeľ, special envoy for the promotion of freedom of religion outside the EU from 2016 to 2019, meets Pope Francis in 2018. / Vatican Media/Ján Figeľ personal archive.

On the eve of Pope Francis’ visit to Slovakia, the country appointed Anna Záborská, a former member of the European Parliament, as its plenipotentiary for religious freedom.

The decision was approved after Christos Stylianides, the European Union’s religious freedom envoy, stood down just five months after taking up the role to lead Greece’s new climate crisis ministry.

The first person to hold the post of special envoy for the promotion of freedom of religion or belief outside the EU (also known as the EU Special Envoy on FoRB) was the Slovakian politician Ján Figel’.

He told CNA that his appointment to the role in 2016 inspired other countries to take the promotion of religious freedom abroad more seriously.

“But the EU position on freedom of religion and belief is again vacant. For the current Commission [the European Commission, the EU’s executive branch], it does not seem to be a priority, regrettably.”

Figel’, 61, has extensive political experience. He was the EU commissioner for education and culture, and the deputy prime minister of Slovakia, a central European nation with a population of 5.5 million bordered by Poland, Ukraine, Hungary, Austria, and the Czech Republic.

As the EU Special Envoy on FoRB, Figel’ played a critical role in helping Asia Bibi, a Catholic woman unjustly sentenced to death for blasphemy, to leave Pakistan after her acquittal.

In 2018, he oversaw the creation of the Punta del Este Declaration on Human Dignity for Everyone Everywhere, which now has hundreds of signatories.

At his suggestion, St. John Paul II was nominated as an honorary citizen of Slovakia.

Talking about his experience as the EU’s special envoy, Figel’ focused on the role of the Church in Slovakia during communism as well as his own personal experience.

The Church, he said, was one of the major opponents of the communist regime.

“The state power severely persecuted it … All religious communities have been dismissed, many bishops imprisoned. The Greek Catholic Church was liquidated as a whole,” he recalled.

Figel’ said that his own uncle disappeared in 1953.

He noted that the chain of events that led to the collapse of communism in Czechoslovakia began in Bratislava, the present-day capital of Slovakia, on March 25, 1988.

On that day, a large crowd assembled for what later became known as the “candle demonstration,” led by Catholic groups. It was the first mass demonstration in defiance of the communist regime since 1969.

“Brutal police force was used against 10,000 protesters praying the rosary and singing state and papal anthems,” Figel’ said. “Yet in November 1989, one and a half years later, half a million citizens prayed the Pater Noster in Prague.”

“The movement towards freedom was unstoppable. It was an annus mirabilis [miraculous year] — a dramatic but peaceful, spiritual revolution, encouraged by the Polish Pope John Paul II.”

“The nation was united in the quest for religious freedom and civil liberties and was successful. This is a historical lesson.”

Speaking about the pope’s Sept. 12-15 trip to Slovakia, Figel’ said he hoped that “Pope Francis will awaken this memory and legacy of Slovakia and the whole of Central Europe.”

He observed that on the very day of the pope’s arrival in Slovakia, “a great Pole will be beatified: the late Cardinal Stefan Wyszyński.”

The pope will travel to Slovakia after a brief visit to Hungary to celebrate the closing Mass of the 52nd International Eucharistic Congress.

“The Eucharistic Congress in Budapest should remind us that faith in Jesus is a reason for persecution and even martyrdom in many countries,” Figel’ commented.

For this reason, the establishment in Slovakia of an office for the promotion of international religious freedom is “a great achievement,” Figel’ said, considering that “already three Visegrád neighbors [Poland, Hungary, and the Czech Republic] have active governmental structures and policies in this respect.”

Figel’ suggested that there were “multiple ways” to help foster awareness of religious freedom, including “prayer, humanitarian aid to the persecuted, constructive official development policies, cooperation with churches and pro-religious freedom NGOs like the Caritas, Aid to the Church in Need, Christian Solidarity Worldwide, Open Doors.”

“As EU envoy,” he said, “I was working with them. They provide excellent work for the needy and the persecuted. It is a pity that there is no EU envoy for religious freedom and belief anymore.”

Reflecting on the situation in his homeland, Figel’ said: “Christianity is a religion of love and dignity. Slovakia has deep Christian roots and culture. The spiritual heritage of the two co-patrons of Europe, St. Cyril and St. Methodius, is quoted in the preamble of our state constitution.”

He added: “Slovakia is the bridge, the connection, between the two lungs of Europe and the Church: the Western and Eastern ones.”

“Therefore, with its history, culture, and relations, Slovakia can strongly contribute to bringing more unity to Christian churches and communities in general, Catholics and Orthodox in particular. But, unfortunately, the current pandemic has brought a lot of death, fear, and polarization.”

Figel’ argued that the coronavirus crisis had revealed the 21st-century world’s vulnerabilities, despite its technological prowess.

“We fought for independence. Now we see how interdependent people and nations are. Europe and the West have growing problems. It is time for moral renewal and the culture of human dignity for all,” he said.

“I hope that the 21st century will be a more humane era, not ‘business as usual.’ We all have a role in making this vision a reality.”

He concluded: “We must close the past century of genocides, from Armenia to Iraq. Evil was powerful in that century because it had many cheap and efficient allies, namely indifference, ignorance, and fear. The three are siblings.”

“I like that the pope promotes different, constructive siblings: civic engagement, education, and courage. And he leads by example. I believe his messages in Slovakia will be not only local and national, but international and universal as well.”