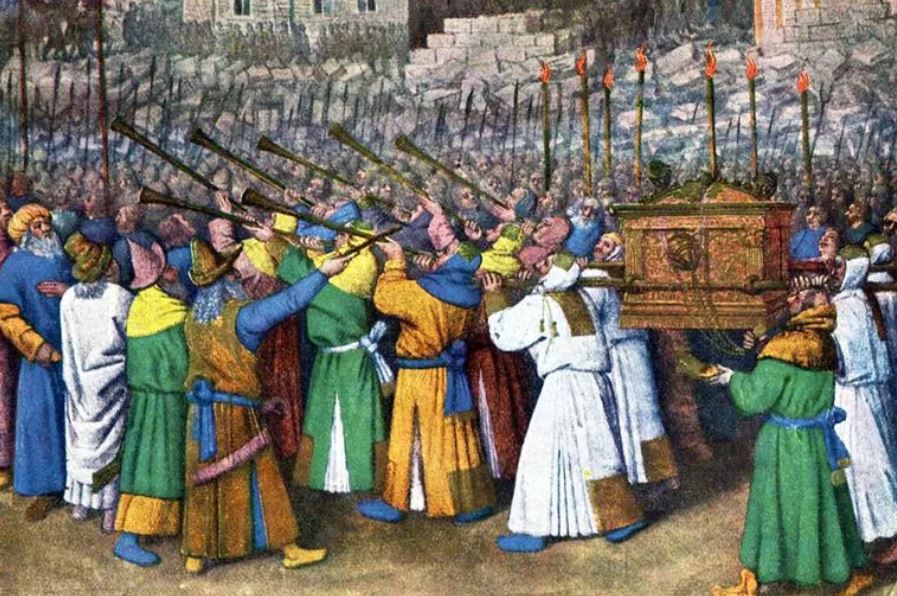 Here is one possible explanation for the high level of erosion in Jericho.

In the field of archaeology these days, it is fashionable to take what is called a “minimalist” view as regards the relationship of the Bible, and “traditional” interpretations thereof, to archaeological findings. Prominently included in this “biblically skeptical” outlook is a disbelief in what Christians (and many past archaeologists) have regarded as “Joshua’s conquest of Canaan” following the Exodus of the Jews from Egypt in the 13th century BC.

One might say that the “poster child” of this skepticism is the reputed Israeli takeover of Jericho. Every child in school (at least when I grew up) knew the old spiritual: “Joshua fit the battle of Jericho, and the walls came tumbling down.” Here is what the Bible states about its conquest:

Joshua 6:20-21, 24. “So the people shouted, and the trumpets were blown. As soon as the people heard the sound of the trumpet, the people raised a great shout, and the wall fell down flat, so that the people went up into the city, every man straight before him, and they took the city. Then they utterly destroyed all in the city … And they burned the city with fire, and all within it …”

The skepticism about Jericho derives from the fact that there is little to no archaeological evidence as to a catastrophic destruction, c. 1250-1200 BC, at or near the beginning of the Iron Age. This is cited as a reason to utterly reject the biblical account.

But the question then arises as to why there is no hard evidence. According to “maximalist” archaeologists, who believe that the Bible accurately reports historical events, the buildings present during the time period in question eroded. Hence, Kenneth A. Kitchen, eminent Egyptologist and archaeologist and evangelical Protestant, wrote about Jericho:

“A great deal of the former Middle Bronze Age township was entirely removed by erosion … of the Late Bronze settlement from the mid-fourteenth century onward, almost nothing survives at all. … If 200 years of erosion sufficed to remove most of later Middle Bronze Age Jericho, it is almost a miracle that anything on the mound has survived at all from the 400 years of erosion between 1275 and the time of Ahab (875-853), when we hear report of Jericho’s rebuilding (1 Kings 16:34) in Iron I …”

I submit a possible and plausible explanation of this high level of erosion in Jericho. The ancient city is only 21 miles from the Dead Sea, which has a salinity of 34% — almost 10 times saltier than the oceans — making for a very harsh surrounding environment.

One might suspect that this much salt in the environment could adversely affect man-made structures. In fact, this is true of the famous city of Petra in present-day Jordan, which is 123 miles (198 kilometers) from the Dead Sea. Yet a National Geographic article (“Weathering”) discussed a salt-induced erosion process called haloclasty, and its effect on some buildings in Petra:

Salt also works to weather rock in a process called haloclasty. Saltwater sometimes gets into the cracks and pores of rock. If the saltwater evaporates, salt crystals are left behind. As the crystals grow, they put pressure on the rock, slowly breaking it apart.

“Haloclasty is not limited to coastal landscapes. Salt upwelling, the geologic process in which underground salt domes expand, can contribute to weathering of the overlying rock. Structures in the ancient city of Petra, Jordan, were made unstable and often collapsed due to salt upwelling from the ground below.”

Wikipedia (“Haloclasty”) states: “It is normally associated with arid climates where strong heating causes strong evaporation and therefore salt crystallization. It is also common along coasts.” The Dead Sea is the lowest elevation on earth: 1,412 feet (431 meters) below sea level. Jericho is the lowest city in the world (as well as one of the oldest), at 846 feet (258 meters) feet below sea level.

As stated above, it’s just 21 miles from the coast of the Dead Sea and has a very arid climate (hot desert climate), with average high temperatures in July and August of over 100 degrees, and over 90 in May, June, September and October. (I was there in October 2014 and yes, it was very hot.) In January, the average high is 66 degrees.

Some archaeologists also speculate that the long rainy season in Jericho (late October to April) may have played a role in washing away Jericho’s ruins. So that provides us with two natural explanations.

The water level has also greatly fluctuated. According to the Wikipedia article on the Dead Sea: “During the last several thousand years, the lake has fluctuated approximately 400 meters (1,300 feet), with some significant drops and rises.” This means that during the time under consideration it likely was in some periods much closer to Jericho than it is now, thus exacerbating the problem of haloclasty and the city’s erosion.

As Kitchen noted, Jericho sat uninhabited for 400 years, from about 1275-875 BC. Certainly the salt from the nearby Dead Sea had something to do with (if not being a primary cause of) the extraordinary erosion seen at the site. In other words, this is not simply special pleading, to explain why the site offers no evidence as to Joshua’s conquest and the famous biblical text of the walls falling down.

It’s a perfectly plausible explanation for erosion: an arid, hyper-saline environment, possibly also 400 years of winter rains, and the long period without habitation (with no repair of any crumbling buildings or other structures).

March for the Martyrs highlights &...