Joseph of Arimathea and the Glastonbury Quest for the Holy Grail 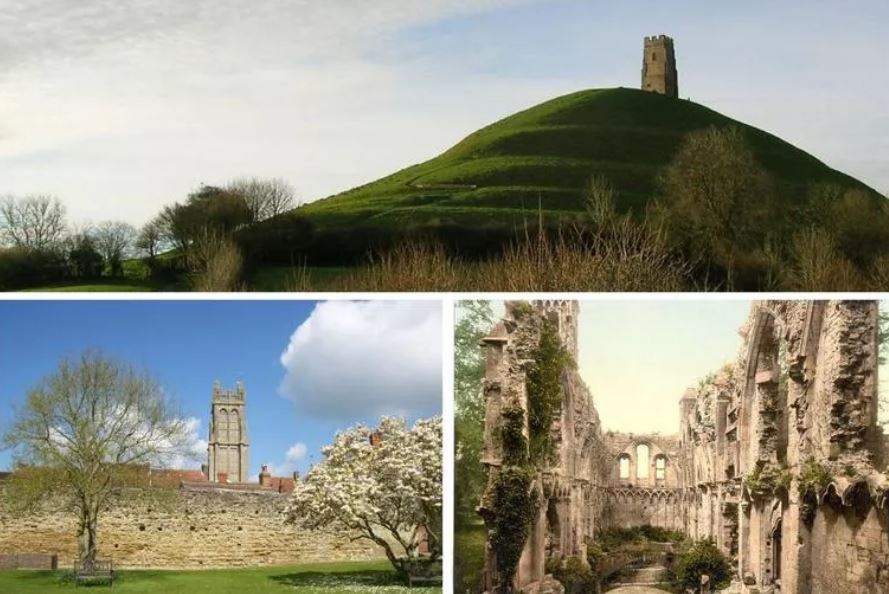 Joseph of Arimathea and the Glastonbury Quest for the Holy Grail

During the Middles Ages, the shrine at Glastonbury attracted many pilgrims. Since the late 16th century, Glastonbury waned. The town’s hill and the abbey’s ruins are seen above in new and circa 1900 images. (photo: Public domain)

An ancient and mysterious Marian shrine is undergoing a revival in an English town of unusual acclaim.

K.V. Turley, May 29, 2021
At the start of the 19th century, the poet and visionary William Blake wrote the following words:

And did those feet in ancient time,

And was the holy Lamb of God,

Legends claim that Joseph of Arimathea was a regular visitor at Glastonbury and that he brought the Holy Infant with him on one of those journeys. Could Blake’s words, as some claim, reference historic events linked to the English town of Glastonbury?

“First of all, it’s important not to dismiss the possibility that Joseph of Arimathea actually did come to Glastonbury,” says Michael Aquilina, executive vice president of the St. Paul Center for Biblical Theology and author of The Grail Code: Quest for the Real Presence (2006). Speaking to the Register, he explained that, by about 50 A.D., the Romans had thoroughly subdued the southern part of Britain. “So, in some ways, it was easier to go from Palestine to Britain then than it is now, because it was all one country. There wasn’t a single national border to cross,” he observes. “And we know that people were very mobile in Roman times. The same character can pop up in history at opposite ends of the empire.”

What does he make of the alleged links between the Holy Grail and Glastonbury? “If Joseph had really decided to go to Britain and take the cup that had held Jesus’ Blood with him,” he says, “it would have been easy to do. It could have happened.”

He points out that the earliest extant versions of the grail story come from the High Middle Ages, when enthusiasm for the theology of the Eucharist was reaching its peak.

“Popular devotion to the Eucharist expressed itself in the Arthurian romances,” Aquilina said, “where the quest for the Holy Grail could represent every Christian’s quest to overcome sin and death through the power of the Body and Blood of Christ.”

Interestingly, Aquilina goes further, stating that, although “cynics point out that the association of the Holy Grail with Glastonbury may have been very useful to the monks there” (no doubt earning them a steady flow of income from pilgrims), such a claim “reinforces the most important thing about the legend: that no one could imagine anything more important than the Eucharist; and that the most desirable relic on earth would be the cup that held Jesus’ Blood.”

Aside from the more speculative aspects of legends associating the Holy Grail with Glastonbury, we do know for certain that by the time the Saxons arrived in 658 A.D., there was already a church at Glastonbury. It was known as the “Old Church.” No one knew who had built it, but legend recounts that Joseph of Arimathea had erected a wattle — using twigs, reeds and branches intertwined with poles to make walls and roofs — church when he came to Roman Britain. This wooden church dedicated to Our Lady stood until May 25, 1184, when a monastery and new stone church were built with the same dimensions as the church they replaced. Once more dedicated to Our Lady, this was duly consecrated in 1186.

During the Middles Ages, the shrine at Glastonbury attracted many pilgrims. This ended in September 1539, when King Henry VIII’s commissioners arrived. The last leader of the Benedictine monastery, Abbot Richard Whiting, attempted to resist the official destruction of the monastery and the ancient site of pilgrimage. On Nov. 15 that year, on nearby Glastonbury Tor, a hill overlooking the shrine, Abbot Whiting was hung, drawn and quartered.

Thereafter, since the late 16th century, Glastonbury, like so many of England’s Marian shrines, disappeared from popular consciousness.

Of Lore and Legend

“As Catholics, Glastonbury has a long, rich and sometimes tortured history,” explains David Baldwin, ex-Royal marine, historian and author of Glastonbury. He told the Register, “Glastonbury is no ordinary rural English town. It has several intriguing and unique stories, unlike any other town, and that go back beyond the mists of history.”

To that end, he starts to list the following: “Joseph of Arimathea, the relics of the Holy Thorn, the Holy Grail, King Arthur, the Isle of Avalon, saintly pilgrims, the anguish of dissolution and the Reformation, dark spiritual forces and ‘ley lines’ [imaginary lines between important places believed by the New Age to have special powers], the reality of brutal martyrdom, New Age practices and beliefs.” To this day, and perhaps not surprisingly, he says there continues to be a “mystique” about Glastonbury, one that “actively attracts many thousands, all seeking some spiritual truth.”

As for the purported links between Glastonbury and Joseph of Arimathea, Baldwin says, “There is no biblical, historical or hard evidence of him ever having come to Glastonbury, but there are whispers and echoes.”

Baldwin posits that the first hint of any such connection between Joseph of Arimathea and Glastonbury emerges around the 12th century. For the early history of Glastonbury Abbey’s foundation, the chief authority is William of Malmesbury in his De antiquitate Glastoniensis Ecclesiæ and De Gestis Regum (lib. I), with the former work composed about 1135. The monk writes, “Desiring to spread the word of Christ further, he [Philip] sent twelve of his disciples into Britain to teach the word of life. It is said that he appointed as their leader his very dear friend, Joseph of Arimathea, who had buried the Lord. They came to Britain in A.D. 63, the fifteenth year after the assumption of the Blessed Mary, and confidently began to preach the faith of Christ.” Soon after which, “the saints were incited by a vision of the Archangel Gabriel to build a church [at Glastonbury] in honor of the Virgin Mary … making the lower part of all of its walls of twisted wattle, an unsightly construction no doubt, but one adorned by God with many miracles.”

Baldwin suggests that it was from this period onwards that many of the legends and traditions around the Holy Grail and Holy Thorn at Glastonbury grew.

The Glastonbury shrine’s modern revival came in 1925, when a small Catholic church was built in the town. In 1939 the foundations of a new Catholic church were laid near where the medieval monastery at Glastonbury had once stood. And then, in 1955, a statue bearing the ancient title Our Lady St. Mary of Glastonbury was blessed by the then-apostolic delegate when the shrine was formally restored.

Since 2019, a new religious community following the Rule of St. Benedict has been formed at Glastonbury: the Community of Our Lady of Glastonbury.

Dom Bede Rowe is the moderator of that community and rector of the shrine. He told the Register that the modern perception that links Glastonbury to rock-music festivals and the occult may be depressingly correct but also inherently wrong.

“When you hear of Glastonbury in the media,” says Dom Bede, “then what you hear about is the rock concert. When you come here, then, what you see are shops selling crystals, covens of witches, the worshippers of the Norse Gods, the Satanists, a mixture of beliefs jumbled together, a cacophony of screeching voices, searching and searching, but finding only a reflection of themselves, with the devil holding the mirror.”

He senses that many come to Glastonbury “seeking something, and not looking to the Church, they look somewhere, anywhere. And they find the New Age religion of self-realization and earth worship.”

In some respects, though, he sees Glastonbury as no different from much of modern life. That said, Dom Bede is under no illusion that the contemporary occult practices in the locality are a coincidence.

“When a place which once was so holy is brought low, then it falls. It means that the devil is concerned about it. If Glastonbury is unimportant, then he would not bother with it. But because it is a continued place of devotion to Our Lady, it is continually attacked.”

Once known as “the fount and source of all right religion,” Glastonbury’s significance, he continues, is on account of it being claimed as the oldest shrine to Our Lady in Northern Europe, and the only reason for its existence today is to maintain devotion to the Blessed Virgin Mary.

What, then, is the new community’s mission in and to modern Glastonbury and its eclectic band of pilgrims?

Dom Bede feels that his community, like Our Lady, is to be a “silent, hidden witness.” He is clear, however, that that witness is linked to the shrine at Glastonbury as “a continuing sign of devotion to the Virgin that this country once had — and should have now.”

What Are the 3 Traits of a Gentlem...