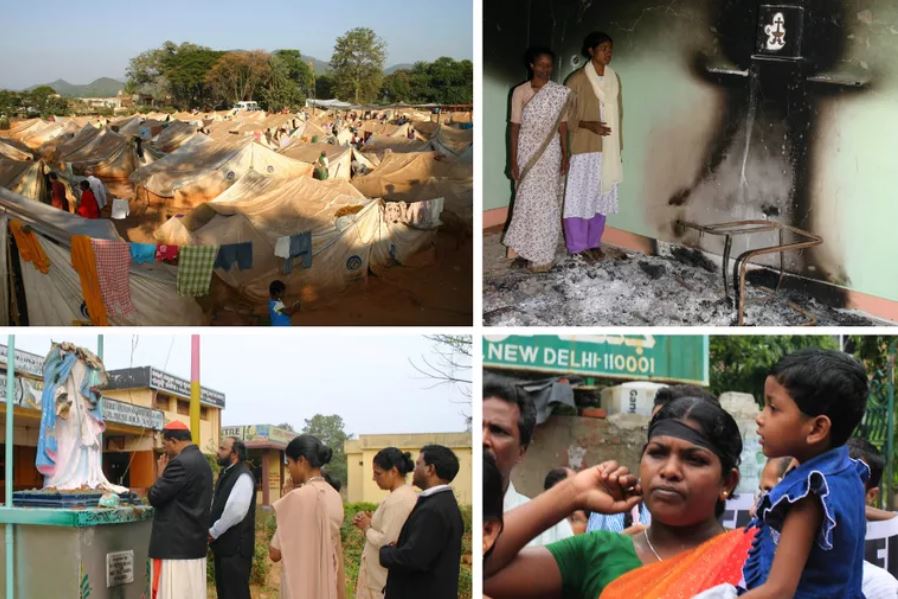 BHUBANESWAR, India — The 13th anniversary of the worst anti-Christian violence in modern Indian history has drawn renewed attention to the incredible Christian witness and the miscarriage of justice resulting from the 2008 bloodshed that engulfed the jungles of Kandhamal in the eastern state of Odisha.

“The Kandhamal Christians have enlightened us. They have taught us that we need not be afraid,” Bishop Niranjan Sual Singh said on Aug. 30, while chairing the last of a series of Kandhamal memorial webinars across the nation marking the anniversary.

Christian targets in the idyllic jungle district went up in flames following the mysterious murder of 81-year-old Hindu nationalist Swami Lakshmanananda Saraswati, who was shot dead in his hermitage in Kandhamal on Aug. 23, 2008.

Claiming the murder to be a “Christian conspiracy,” Hindu nationalist extremists promptly paraded the body of the slain Hindu leader across Kandhamal in a zig-zag funeral procession for two days, calling for revenge on Christians.

The Hindu zealots ordered Christians to recant their faith and undergo “reconversion” to be allowed to continue to live in the region, and some who refused were chopped into pieces or burnt alive.

Nearly 100 Christians embraced martyrdom, while thousands fled to jungles during weeks of unabated violence that left more than 350 churches and 6,000 houses plundered as well as rendering 56,000 homeless in Kandhamal, located to the southwest of Odisha’s capital city of Bhubaneswar.

“I am from Kandhamal, and I remember the constant threats and discriminations under which I grew up. The violence [2008] has only strengthened the faith of our people. They have stood firm,” said Bishop Singh, who heads the Diocese of Sambalpur in the northern area of Odisha.

“This remembrance has become a part of our life,” Bishop Singh noted in his inaugural address to the Aug. 30 webinar, titled “Kandhamal Memorial: Defending Freedom and Religious Minority Rights.” The event was attended by more than 150 Christians and social activists.

“This is not just remembrance. We need to defend our religious freedom and raise voices,” said Bishop Singh.

“Religious extremism and hatred towards religious minorities in India and elsewhere are on the rise,” said Sister Justine Gitanjali Senapati, coordinator of the Justice Coalition of Religious, at the webinar.

“As an antidote to these, mutual tolerance and working for the promoting of their rights, dignity and justice should go on. Religious leaders and others have a greater role and responsibility for defending their rights, justice and dignity,” Sister Justine said.

Kanakrekha Nayak, a widow whose husband was brutally killed in front of her and their two toddler children for refusing to recant his faith, revived the dreadful memories and the travesty of justice in Kandhamal: “Will the government bring back my husband?”

While the killers of her husband are roaming free, the widow said the lack of conviction in the murder and the compensation she has received (approximately $11,000) “makes a mockery of the [Indian] constitution.”

“I am happy that I am not alone. Your support gives me strength to move on,” said the illiterate widow.

“I could have been reduced to ashes that day. God protected us from being burnt alive,” Sister Anjali Nayak, a member of  the Carmelite Sisters of St. Theresa, recounted to the Register about her miraculous survival when her convent at Balliguda in Kandhamal was attacked by Hindu mobs.

The nun took shelter in the nearby seminary chapel along with another senior nun when the Hindu militants torched and plundered the convent, which also serves as a social action center.

Though the memory is “dreadful,” Sister Anjali said the experience has only “strengthened and increased my faith.”

“The incredible witness of our people is an inspiration to me to work for them,” Sister Anjali said.

Amid the protracted persecution, Kandhamal has become a unique chapter in Church history with hardly any Christian forsaking the faith. And hundreds of Hindu assailants have embraced the Christian faith in Kandhamal.

Several speakers at the conference stressed the travesty of justice they said had occurred in Kandhamal,  which eventually had induced the Supreme Court of India to balk at the unacceptable level of acquittals and “inadequate compensation” for the Kandhamal Christian victims.

“Such a large proportion is very disturbing,” Chief Justice T.S. Thakur declared in August 2016, expressing his concern over the lack of convictions for Kandhamal-related crimes. The chief justice’s pronouncement represented the final comment on the case, which was initially filed by the late Archbishop Raphael Cheenath of Cuttack-Bubaneswar in early September 2008 and remained before the courts for nearly eight years afterward.

The Supreme Court verdict noted that, of the 827 criminal cases registered, 315 cases were not pursued, while of 362 cases in which a verdict was given, “only 78” resulted in a conviction.

Father Ajaya Kumar Singh, director of the Odisha Forum for Social Action, reminded the Aug. 30 conference that the Supreme Court of India had expressed concern over the large number of acquittals in Kandhamal and ordered Odisha government retry those cases.

“But, sadly, nothing has happened so far [after five years], he said.

Justice Ajit Prakash Shah, former chief justice of the Delhi High Court, presented a scathing critique of the judicial events in Kandhamal at a national secular webinar hosted by the National Solidarity Forum — a coalition of dozens of secular and Christian social action groups set up to speak up for Kandhamal — to mark the anniversary on Aug. 25.

“The state government of Odisha completely failed to control the violence and even did not acknowledge that this was communal violence of extreme severity,” said Justice Shah.

The Kandhamal investigations, he added, were “biased.”

“The security forces deployed to control the spread of violence were quite apathetic toward the suffering of people; they are quite unequipped, too, to tackle organized violence of such intensity,” said Justice Shah, who presided over the National People’s Tribunal on Kandhamal in 2010.

“Compensation was also not paid properly, and cases were not reopened. The way the violence was handled indicated the failure of the system,” Shah said.

On the 13th anniversary of the Kandhamal attacks, the National Solidarity Forum established a new Kandhamal Human Rights Award.

The first recipient of this award was the People’s Union for Civil Liberties, a national organization that has been in the vanguard of defending civil liberties and human rights in India for decades.

“Kandhamal violence is a unique case of multiple violations of basic human rights and the dignity of the most vulnerable groups,” the National Solidarity Forum said in a statement while announcing the award. “Justice is yet to be done and rights to be restored.”

‘Through the Cross to Heaven’: The...