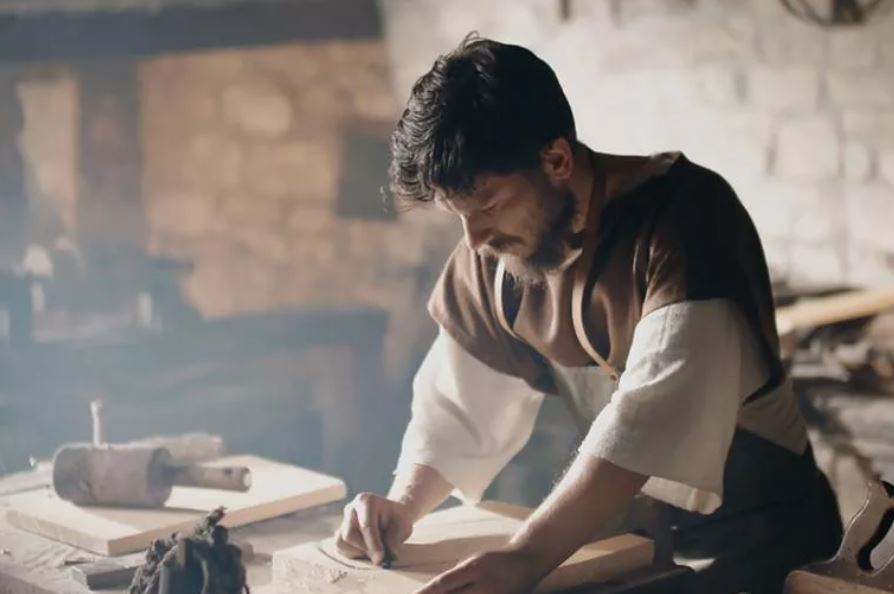 A wonderful, inspiring film about St. Joseph and what he does for those devoted to him will be aired several times on television in the next few weeks.

Another great treasure in this Year of St. Joseph has arrived for everyone. From now through Nov. 21, ABC affiliates throughout the country will be showing St. Joseph, Our Spiritual Father, a film produced the Knights of Columbus.

The Knights wisely chose the award-winning Spirit Juice Studios, which is devoted to communicating the Catholic message in the highest of moviemaking quality, to bring his story of St. Joseph and the effects he has on the spiritual and temporal lives of those who turn to him.

Right away we know we’re in the best of hands because the 60-minute film begins with exciting music and an onscreen narrator — Marian Father Donald Calloway, author of Consecration to St. Joseph, giving us a quick introduction and insight into St. Joseph’s importance. The introduction also brings a wondrous montage of images of St. Joseph, from many statues inside and outside of churches and grottoes, to murals, stained-glass windows and paintings.

When Mother Mary Agnes Donovan of the Sisters of Life says St. Joseph “is a spiritual father interceding forever before God for your sake. He cares for the good of your life. He cares that God’s plan within your life will be fulfilled,” we’re ready to see how that is happening, and has happened, in the lives of several people sharing their stories.

Father Calloway makes clear that while the “Church has always recognized Mary as our Spiritual Mother, the Church hasn’t always understood that same significance for St. Joseph, that he’s our Spiritual Father.”

Again, this film works smoothly to illustrate that he is our Spiritual Father by interweaving the basic story of St. Joseph in the Gospels with the stories of several people and families whose lives have been immeasurably enriched when they turned to St. Joseph. Every one of these stories is uplifting. One will even bring many to tears.

St. Joseph, Our Spiritual Father uses a minimum of actors to unpack the Gospel incidents, to highlight the great mysteries about St. Joseph, and to share how through his example he inspires and urges people to imitate and turn to him for their needs.

To understand the connection of St. Joseph to ourselves better, we hear several people shedding light on what we’re seeing — what St. Joseph had to face, how he responded and how that becomes a model par excellence for us, and in a particular way for men. These aren’t people pulled out of a hat; these are people who we have come to know over the years. Leading the list is Father Calloway. Others sharing brief insights include Augustine Institute president Tim Gray, John Paul II Institute professor Joseph Atkinson, Bishop James Wall of Gallup, New Mexico, and Pope Francis, who talks about his devotion to the sleeping St. Joseph.

Personal testimonies come alive as individuals invite us into their lives and families and the life-changing effects that devotion to St. Joseph has brought them.

No one has to be a sports aficionado to be moved by the personal testimonies of former MLB player Daryl Miller and former NFL player Matt Birk. They share stories of what St. Joseph means to them, how he is a role model for men, and how devotion to him has strengthened their marriages and families in faith and love. We’re even treated to several beautiful moments with the families sharing their heartwarming commitment to Jesus’ foster father. Their witness is enough to convince us to do likewise by turning to St. Joseph. As one of the men explains, “The battle is not out there, but it’s at home within me, in the family, and that’s where St. Joseph’s help comes in.”

Other inspiring stories include one told by Aaron Joseph, founder of the lay apostolate Saint Joseph Our Patron, and another shared by a wife about her husband and their children that will bring many to tears. This very moving section is about how St. Joseph is also patron of a happy death.

Spirit Juice captures all these stories in a way that proclaims truth about the goodness and spirituality that takes hold with a devotion to St. Joseph, something so needed in these troubled times as we turn to him as pillar of families and Patron of the Universal Church.

From scene to scene, inspiration is never lacking. We visit with Notre Dame University students who belong to the Knights of Columbus chapter on campus explaining why they are consecrating themselves to St. Joseph. Another beautiful cinematic trip takes us to the Oratory of St. Joseph in Montreal, and the religious zeal that grew for this greatest of all saints after Our Lady through the simple efforts of St. André Bessette. A brief bit of archive footage gives a welcome glimpse of Brother André too.

Because St. John Paul II wrote about the importance of St. Joseph in Redemptoris Custos (“On the Person and Mission of Saint Joseph in the Life of Christ and of the Church”), and St. Joseph being the ultimate example of the dignity of work, we are treated to archival footage of John Paul II with some excellent insights from George Weigel.

Eye-openers abound. A Knight in Poland tells the importance of St. Joseph in his life stretching back to his grandfather, who was surely saved by St. Joseph’s intercession from death in a World War II concentration camp.

Since St. Joseph was a carpenter, we also travel cinematically to the Loreto Chapel in Santa Fe, New Mexico, to see the miraculous staircase attributed to him.

One of the small bonuses in the film’s narrative is the way this documentary uses graphics to illustrate the connection from the Davidic line to Joseph to Jesus the Messiah. It fits in the overall picture of St. Joseph’s place and importance.

In keeping with the spirit of the imagery and message, Supreme Knight Patrick Kelly hit one of the nails on the head when he said that “Joseph waits silently for us, ready to guide us in the same way he helped our Lord. Throughout my life, I have found him to be a powerful help when confronted with tough choices, and I encourage others to turn to him as well.”

St. Joseph: Our Spiritual Father is a beautifully made film that informs and inspires us to “go to Joseph and do what he tells you” (Genesis 41:55).

From abortionist to pro-life leade...