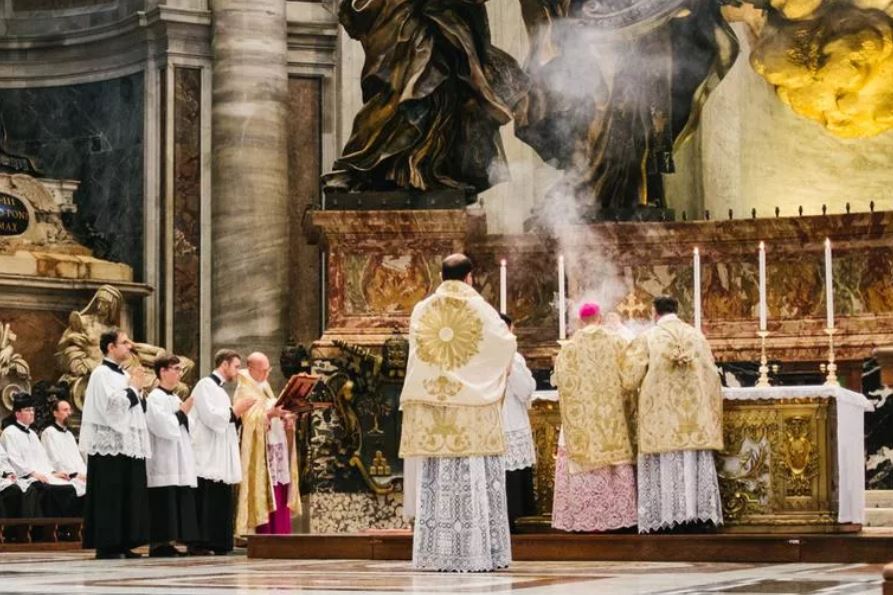 ‘I pray that the faithful will not give way to the discouragement which such harshness necessarily engenders but will, with the help of divine grace, persevere in their love of the Church and of her pastors,’ Cardinal Raymond Burke told the Register.

VATICAN CITY — Pope Francis has issued sweeping restrictions to the celebration of the Traditional Latin Mass, reversing previous papal decrees that had liberalized the Mass celebrated before the liturgical reforms of Pope St. Paul VI in 1970, and urging a “return in due time” to the liturgy instituted after the Second Vatican Council.

Supporters of the Latin Mass have responded to the new papal document with concern, saying that it clamps down in an unjustifiably swift and harsh manner on its celebration

In a new apostolic letter issued motu proprio titled Traditionis Custodes (Guardians of the Tradition) and signed on July 16, the feast of Our Lady of Mount Carmel, the Pope has taken the “firm decision” to immediately overturn Benedict XVI’s 2007 motu proprio Summorum Pontificum and Pope St. John Paul II’s 1988 motu proprio Ecclesia Dei that liberalized the availability of the Mass celebrated before 1970.

One of the key elements of Benedict’s Summorum Pontificum, which stated that the Roman Missal promulgated by John XXIII in 1962 was “never abrogated as an extraordinary form of the Church’s Liturgy,” was that it granted that any stable group of lay faithful could ask a priest to celebrate this form of the Mass (also called the Extraordinary Form of the Roman Rite), and he would need “no permission from the Apostolic See or from his own Ordinary.”

But under Francis’ new motu proprio, it will now be the “exclusive competence” of the diocesan bishop “to authorize the use of the 1962 Roman Missal in his diocese, according to the guidelines of the Apostolic See.” The bishop will also be given other far-reaching powers including over granting permission to priests who wish to celebrate the old Mass, and those already doing so, and ending the right for groups to have this form of the Mass celebrated in parish churches.

Francis said he was making the changes after he had “carefully considered” the results of a nine-point survey sent by the CDF to bishops last year to assess the implementation of Summorum Pontificum, and “in the light of experience that has matured during these years.”

“The responses reveal a situation that preoccupies and saddens me, and persuades me of the need to intervene,” the Pope wrote in an accompanying letter to bishops published on Friday.

“Regrettably, the pastoral objective of my predecessors, who had intended ‘to do everything possible to ensure that all those who truly possessed the desire for unity would find it possible to remain in this unity or to rediscover it anew,’ has often been seriously disregarded,” he said.

He added that efforts by St. John Paul II and Benedict XVI to “recover the unity” after the Society of St. Pius X broke away from Rome in 1988 over the liturgical and doctrinal reforms that followed Vatican II have been “exploited to widen the gaps, reinforce the divergences, and encourage disagreements that injure the Church, block her path, and expose her to the peril of division.”

Under the new norms, the bishop is now charged with the responsibility to determine that groups who celebrate the Mass in the Extraordinary Form “do not deny the validity and the legitimacy” of the liturgical reforms “dictated by Vatican Council II and the Magisterium of the Supreme Pontiffs.”

The bishop is also to “designate one or more locations” where the faithful of these groups may gather for the Eucharistic celebration, but not in parish churches. The document also prohibits “the erection of new personal parishes.”

Further authority given to the local ordinary includes establishing days on which Mass in the Extraordinary Form can be celebrated, and ensuring that “in these celebrations the readings are proclaimed in the vernacular language.” Furthermore, the bishop is to delegate a priest, skilled in the old form of the Mass and with a knowledge of Latin, to pastorally care for these faithful.

In other measures, the Pope has said the local bishop is to ascertain whether parishes that have been established for the benefit of groups who celebrate the Mass in Latin are “effective for their spiritual growth” and whether to “retain them.” He must also “take care not to authorize the establishment of new groups.”

The decree also stipulates that priests ordained after the publication of this new motu proprio must submit a “formal request” to the bishop if they wish to celebrate the Extraordinary Form of the Mass, who in turn must also consult the Holy See “before granting this authorization.” Priests already celebrating the old form of the Mass must also obtain permission to continue to do so from their local bishop.

Meanwhile issues relating to traditional institutes and societies (for example, the Priestly Fraternity of St. Peter and the Institute of Christ the King Sovereign Priest) will also move from jurisdiction of the CDF and now be handled by the Congregation for Institutes of Consecrated Life and Societies for Apostolic Life.

The Pope ended the decree by stating that “previous norms, instructions, permissions, and customs that do not conform to the provisions of the present motu proprio are abrogated.”

In his accompanying letter to bishops, Francis gave his reasons for such sweeping changes. The Holy Father insisted that the liturgical reforms promulgated after the Second Vatican Council are “the unique expression” of the Roman Catholic Church’s liturgy.

Writing to the bishops “with trust and parrhesia,” he outlined the intentions of St. John Paul II and Benedict XVI and noted they were “confident” their provisions would not “place in doubt one of the key measures of Vatican Council II or minimize in this way its authority.” He further noted that Benedict found the fear of division “unfounded” because “the two forms of the use of the Roman Rite would enrich one another.”

But Francis said he sees abuses in the celebration of the liturgy “on all sides” — on the one hand “unbearable distortions” of the new Missal, but also what he sees as the “instrumental use” of the 1962 Roman Missal which is “often characterized by a rejection not only of the liturgical reform, but of the Vatican Council II itself, claiming, with unfounded and unsustainable assertions, that it betrayed the Tradition and the ‘true Church.’”

He said: “One is dealing here with comportment that contradicts communion and nurtures the divisive tendency,” and added that “in defense of the unity of the Body of Christ, I am constrained to revoke the faculty granted by my predecessors.”

To give legitimacy to his decision, the Pope noted that St. Pius V also abrogated all the rites that “could not claim a proven antiquity,” and established a single Roman Missal that lasted four centuries. He also said Paul VI had the goal of unity in mind with his liturgical reforms, with a “single and identical prayer.”

“This unity I intend to re-establish throughout the Church of the Roman Rite,” Francis wrote. He also stipulated that “seminarians and new priests” should be formed according to the “liturgical reform willed by Vatican Council II.”

The Pope ended his letter by calling on bishops to be vigilant in expressing “communion even in the unity of one, single Rite, in which is preserved the great richness of the Roman liturgical tradition. I pray for you. You pray for me.”

In comments to the Register, Cardinal Raymond Burke, prefect emeritus of the Apostolic Signatura, noted what he sees as a number of flaws in Traditionis Custodes, saying he could not understand how the new Roman Missal is the “unique expression of the lex orandi of the Roman Rite,” as the new motu proprio states. The Extraordinary Form of the Mass “is a living form of the Roman Rite and has never ceased to be so,” Cardinal Burke noted.

He also could not understand why the motu proprio takes effect immediately, as the decree “contains many elements that require study regarding its application.”

The American cardinal further noted that in his long experience he has not witnessed the “gravely negative situation” Francis describes in his letter.

While some faithful may have “erroneous ideas,” he said, he has found the faithful in question generally “have a profound love for the Church and for their pastors in the Church” and “in no way ascribe to a schismatic or sedevacantist ideology. In fact, they have often suffered greatly in order to remain in the communing of the Church under the Roman Pontiff,” he said.

Cardinal Burke added that if there are situations “of an attitude or practice contrary to the sound doctrine and discipline of the Church, they should be addressed individually by the pastors of the Church, the Roman Pontiff and the Bishops in communion with him.”

Cardinal Burke also questioned the motu proprio’s tone, observing that it is “marked by a harshness” towards faithful who worship in the Extraordinary Form.

“I pray that the faithful will not give way to the discouragement which such harshness necessarily engenders but will, with the help of divine grace, persevere in their love of the Church and of her pastors,” he said.

Joseph Shaw, chairman of the Latin Mass Society in the U.K., told the Register he found it a “staggering document, exceeding our worst expectations.

“Pope Francis has completely undone the arrangements of Summorum Pontificum and crested a situation which seems entirely unworkable, banning the Extraordinary Form from parish churches.”

He added, “The negative terms of the document will come as a grievous disappointment to those many laity and priests who have been using the Extraordinary Form because Pope John Paul II and Pope Benedict XVI encouraged them to do so, describing it as a ‘rightful aspiration’ and ‘riches’ for the Church respectively.”

Luigi Casalini, editor of Messa in Latino which first revealed such a motu proprio was being prepared, said he believed Summorum Pontificum has been “repealed with unprecedented violence and a total lack of charity.”

The survey to which Francis refers in the motu proprio and which he says led him to issue the motu proprio reportedly received only a moderate response, and more than half of those who responded had a favorable or neutral view of the reception of Summorum Pontificum.

“I know many Bishops who are very close to the faithful who worship according to the Usus Antiquior [Extraordinary Form] and to the priests who serve them,” the cardinal said. “It is my hope that they were also heard through the survey.”