Learning to ‘Love in the Ruins’ 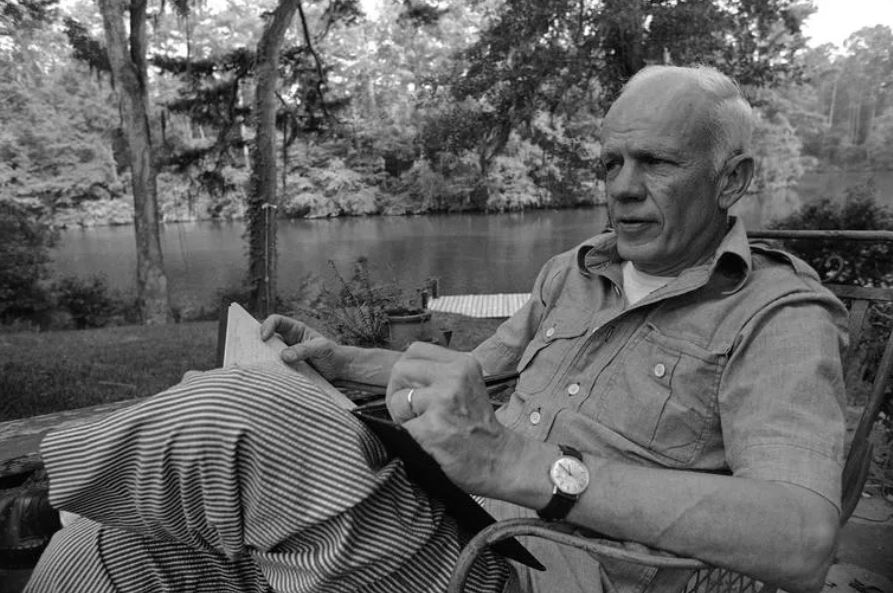 Learning to ‘Love in the Ruins’

Half a century after its publication, Walker Percy’s ‘Adventures of a Bad Catholic at a Time Near the End of the World’ may be more valuable today than ever before.

For the contemporary reader, working through Walker Percy’s Love in the Ruins islikely to induce something along the lines of déjà vu. While the details differ, the sociopolitical backdrop Percy paints — one in which “Americans have turned against each other” along political, racial and religious lines — should seem eerily familiar today, even though the book was published in 1971 and is set in the mid-1980s.

Republicans may not have rebranded themselves “Knotheads,” and the left might not yet have succeeded in removing “In God We Trust” from the penny nor in adding “Abortion Now” to their party name — but our politics have become hyperpolarized, with the extremes more potent than ever before.

Blatant segregation isn’t as much a problem as it was five decades ago and an armed band of Bantus are unlikely to form a separatist state anytime soon — but racial tensions have ratcheted up, and talk of shifting the balance of power along racial lines dominates national discussion. And while the U.S. Church hasn’t splintered into the American Catholic Church (who celebrate Property Rights Sunday and play The Star-Spangled Banner at the elevation) and the Dutch schismatics (whose priests’ request to be allowed to marry was soon followed by a request to be allowed to divorce) with a small remnant of actual Roman Catholics, the alternative currents of nationalism and progressivism are wreaking havoc within its ranks.

Throw in the widespread neuroses of anxiety and rage, the dominance of the cult of scientism, and the zealous expansion of euthanasia, and the parallels between the America of the novel and the America of today are downright uncanny.

Given this, it’s hard not to take observations from the pages — such as “bad Catholic” protagonist Tom More’s assessment that “the USA didn’t work” — and view them as prophetic forecasts for our own day and age, indications that things are, likewise, soon to come apart at the seams.

But if one is looking for some kind of remedy from Percy, a blueprint for how we can avoid a national catastrophe and keep the U.S. humming along, prepare to be disappointed. In fact, given the way the novel ends, Percy may think that some kind of general upheaval of U.S. society is inevitable.

Instead, according to Jessica Hooten Wilson, Ph.D., author of multiple books on the works and worldview of the Catholic novelist, Percy’s intention in this work is to “get us in tune with a different way of seeing ourselves” — rediscovering a fuller way of being human that can help us to live and to love, whether or not America maintains its unity and might or falls into ruin.

Love in the Ruins is one of Percy’s more “social” novels, satirizing elements of American life like sex, politics and religion at a societal level. Even so, it is still a novel ultimately concerned with a theme that runs through nearly all of the existentialist Catholic author’s works: the individual person’s struggle for meaning, identity and integrity within an epoch that breeds dislocation, alienation and malaise.

What’s to blame for these maladies? Percy’s character Dr. Tom More provides an indication with his observation that “the center did not hold.” More is speaking of U.S. society, but his comment applies to a different center as well: man’s center, the unity between body and soul, what C.S. Lewis — who Hooten Wilson says Percy read extensively — would call “the chest.”

More, a psychiatrist and a believing but non-practicing Catholic, diagnoses the scenario as “the soul of western man flying apart here and now,” a process kicked off by Enlightenment philosopher René Descartes, who 500 years ago “ripped body loose from mind and turned the very soul into a ghost that haunts its own house.”

Tell-tale signs of this condition are what More identifies as angelism and bestialism — the former a tendency to engage in pure abstraction disconnected from one’s incarnate context and responsibilities, the latter a proclivity for engaging in “natural” things like food, drink and sex with no account for man’s rationality or transcendent end. The two are, in a sense, opposites, but More notes that they often coexist within the same person, and both are ultimately a denial of the fullness of our soul-body composite selves.

“We’re either just heads or guts,” said Hooten Wilson, who serves as scholar in residence at the University of Dallas, characterizing this view that persists today.

On the one hand, she says many humans tend to treat themselves like they’re made to be “the perfect computer,” empirical processing centers encased in flesh and bone. On the other hand, many people see humans simply as an amalgamation of chemicals, a collection of appetites that simply need to be satisfied.

This binary is ultimately too limited and excludes those faculties that make us most human, such as love, self-sacrifice, and the dogged, daily pursuit of the transcendent. As More notes at one point, “it is pilgrims we are, wayfarers on a journey, and not pigs, nor angels.”

Man’s forgetfulness of his wayfaring status contributes to many of the broader social maladies Percy addresses in Love in the Ruins, as important parts of one’s identity, such as race and sex and political views, become absolutized. The eclipsing of more fundamental truths of the self, such that we are made to seek God, contributes to a “Christ-forgetting, Christ-haunted, death-dealing Western world.”

In a particularly disturbing example, Percy’s description of the American Catholic Church is a grotesque illustration of what can happen when the virtue of patriotism becomes misplaced, seeping into the sphere of religious worship and repurposing it for nationalistic ends. Parishioners conclude Mass by saluting both Jesus Christ and America, a tendency to equate the religious and political realm that Hooten Wilson says was on display at the Jan. 6 U.S. Capitol riots, where people praised God and former President Donald Trump in the same sentence.

“That kind of confusion and conflation is what leads to the death-dealing or the violent U.S.A. that Percy talks about. You associate martyrdom with laying down your life for your country, not recognizing that your country is just a particular place that you’re called to be in and loyal to, but only insofar as it leads you towards being a citizen of the City of God, not to end here as a citizen of earth,” Hooten Wilson explained.

While the diagnosis of widespread angelism and bestialism, presented to us through the lens of Dr. More’s psychiatric studies, is instructive to those trying to live integrated lives today, so is More’s response to the looming threat of catastrophe. He develops the ontological lapsometer, a “stethoscope of the spirit” capable of identifying metaphysical imbalances within an individual.

The employment of such an ill-suited device — a diagnostic tool of science attempting to correct what in many ways is a spiritual problem — only furthers the chaos and indicates deeper problems in More’s life. More tells readers this himself, explaining early on that he has “stopped eating Christ in Communion, stopped going to Mass, and have since fallen into a disorderly life.” He loves “women best, music and science next, whiskey next, God fourth, and my fellowman hardly at all. Generally, I do as I please.”

To the informed Catholic observer, Hooten Wilson said, Percy also leaves hints throughout of More’s compromised status and the need for conversion before him. The story begins, for instance, in a grove of trees, with More acknowledging that he has lost his way, reminiscent of Dante and the beginning of The Divine Comedy. More obvious is Tom More’s namesake, the English saint; but while the saint wrote Utopia to make fun of the idea of creating an ideal place on earth, Percy’s More, a resident of Paradise Estates, Louisiana, ignores this lesson and tries to take on problems beyond his purview, fueled as much by his ambitious desire to be published in the academic journal Brain and receive a grant from the National Institute for Mental Health, as he is to altruistically save the world.

More wasn’t always this way. He fondly recalls a time when he would walk home from Mass with his daughter Samantha, skipping with happiness, singing, alternatively, Tantum Ergo and songs from the opera Don Giovanni. But when his daughter dies of cancer, More disconnects from reality and indulges in his passions, acknowledging later on that he used her death as a “license to drink.” He numbs himself from his guilt, is incapable of humility, and becomes autonomous and egotistical, focused on himself and his own potential and pleasure.

What restores More to integrity? Ultimately, grace and humility. As Hooten Wilson pointed out, his conversion begins with a graced insight into his complicity in his daughter’s death and the experience of contrition. Soon after, he asks for St. Thomas More’s intercession in a moment of conflict with a demonic presence. Ultimately, in the epilogue five years after the story’s climax, it is going to confession for the first time in 11 years, attending Mass, and “eating Christ’s body, drinking his blood” that allows More to “inhabit his own flesh,” free from angelism and bestialism and the falseness of autonomy.

More’s life toward the conclusion of the novel is hardly as exciting as his “adventures” during the heart of the book. The epilogue opens with a simple image rich in symbolism: More tending to his small kitchen garden. He has given up his womanizing days and has started a family with his nurse, Ellen. More continues to practice medicine, but he has lost the social status he once had. But though he and Ellen are poor, he can’t help but “feel like God’s spoiled child.” He has everything he needs and now believes that if a man “wants, works, and waits, he can have.” To be a man, he reflects, is to be a sovereign wanderer, a lordly exile, a worker and waiter and watcher.

Ultimately, this is Percy’s proposal for life in the ruins, the ruins of our dissipating nation-state, the ruins of the sense of self amidst postmodern ennui, and the ruins of the cosmos after the stain of original sin. A life of simplicity, humility and responsibility within our own limited sphere of influence. As the priest hearing More’s confession at the end of the book notes, something like “showing a bit of ordinary kindness to people, particularly our own families,” is more important than the self-aggrandizing daydreams and flights of fancy many people so often indulge in.

And the applications for our own day and age are numerous. Hooten Wilson said Percy’s focus on the extraordinariness of the ordinary, the recognition that the things that matter are contained in what’s right in front of us, can free people from the lure of social media, which tempts people to create artificial headlines in their lives. It can also deter citizens from being overly attached to the problems faced by our nation, to the point where they lose their peace and vocational priorities.

“Daily life is enchanted with another existence,” said Hooten Wilson. “And I think Percy would say that to live life is to see this: to look at other people as embodied souls, which is a crazy idea, and to look at the ground around you as if it could actually burst forth with trees and flowers. There could just be more to life than what the headlines are indicating.”

A Saint Fashions a ‘Crown’ for Mar...