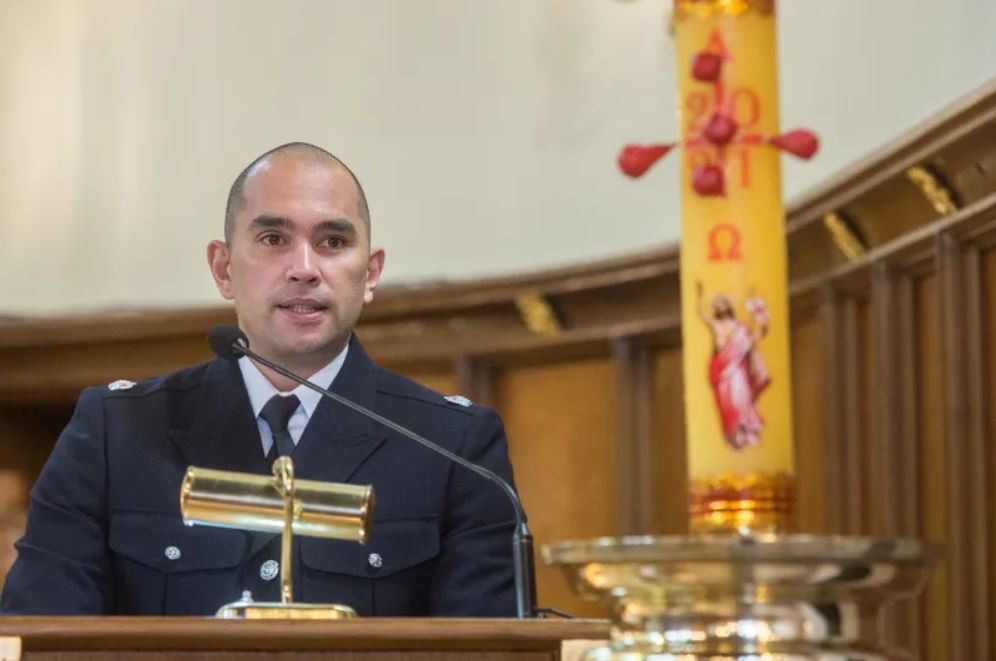 The Archbishop of Southwark and representatives of the Metropolitan Police visited London’s Christ the King Polish parish on Sunday, expressing a desire for renewed collaboration and engagement after offers of the police force had halted a Good Friday service there.

“We are all aware of the events that happened here in the afternoon of Good Friday. The intention of the MPS is to protect and support communities in staying safe during the pandemic. We know, however, that many people were very upset by what happened on Good Friday and we deeply regret that,” Detective Superintendent Andy Wadey told the congregation following a Mass on April 11.

“Since then, there has been significant reflection and learning,” he said, by himself and the superintendent responsible for policing teams in the neighborhood, as well as “our colleagues who work with us locally, and also Senior Leaders at New Scotland Yard.”

Wadey said that “the Metropolitan Police truly wishes to serve and protect you in the best possible way. I truly hope that today marks the start of a renewed deep and lasting relationship, with the Parish of Christ the King, Balham and also the wider Polish communities.”

Police officers had interrupted the Good Friday liturgy at Christ the King parish in Balham, south London, April 2, ordering worshippers to leave or face a fine or possible arrest.

A video posted on YouTube showed a police officer addressing the congregation from a pulpit in the sanctuary of the church, informing them that the gathering was “unlawful” under current coronavirus restrictions.

The Archdiocese of Southwark stated April 11 that “Together with the Metropolitan Police Service, a process of reflection has taken place resulting in the commitment of all parties to work together for healing through renewed collaboration and engagement in a spirit of friendship.”

Christ the King parish had said April 3 that “we believe … the police grossly exceeded their powers by issuing their order without adequate reason, as all government requirements were met.” It added, “We believe that borough police officials have been misinformed regarding the current guidelines for places of worship, claiming that the reason for their intervention is the continuing ban on public celebrations in places of worship in London, due to the lockdown introduced from Jan. 4, 2021. We regret that the rights of worshipers have been harmed on such an important day for every believer and that our worship has been profaned.”

After the April 11 Mass, Archbishop John Wilson of Southwark said that since the Good Friday incident “the genuine concerns of the Polish Catholic Mission, and Christ the King Parish community, have been heard directly by the Metropolitan Police Service. We all share the same desire to move forward in friendship, working together for the common good. We are committed to enabling freedom of worship for everyone, in safe and secure environments.”

He indicated that he, Wadey, and Superintendent Roger Arditti were at Christ the King that day at the invitation of Msgr. Stefan Wylężek, vicar for the Polish mission in England and Wales, and Msgr. Władysław Wyszowadzki, the parish’s pastor.

“I thank them for their kindness and the very fruitful conversations we have had together with the Police this past week,” Archbishop Wilson said.

He added that Arditti and Wadey would be meeting shortly with him and with clergy and representatives of the parish “to begin a conversation about how the Polish Catholic Community in Balham and the Metropolitan Police Service can work to enhance communication and engagement with each other.”

Msgr. Wyszowadzki commented that while the interruption of the liturgy on Good Friday was very painful, “we willingly extend our hand to the representatives of the Police authorities in order to further build a deep and lasting relationship between us, based on mutual respect and regard for the rights of worshippers to freely practice their faith.”

The Metropolitan Police had said April 3 that officers had been “called to a report of crowds of people queuing outside” Christ the King the previous day.

“Officers attended and found a large number of people inside the church. Some people were not wearing masks and those present were clearly not socially distanced.”

“We are particularly concerned about the risk of transmission of the COVID-19 virus as a result of large indoor gatherings at which people are not socially distanced and some are not wearing masks. As such, officers made the decision that it was not safe for that particular service to continue.”

The statement continued: “Understanding the sensitivity of the situation, officers engaged with the priest outside the church and were invited inside to address the congregation. No fixed penalty notices were issued.”

“This was one of a series of numerous events taking place at the church over the Easter period. We are engaging with church authorities today and will continue to do so in the coming days.”