Love Them Both: Offering Healing to Women After Abortion 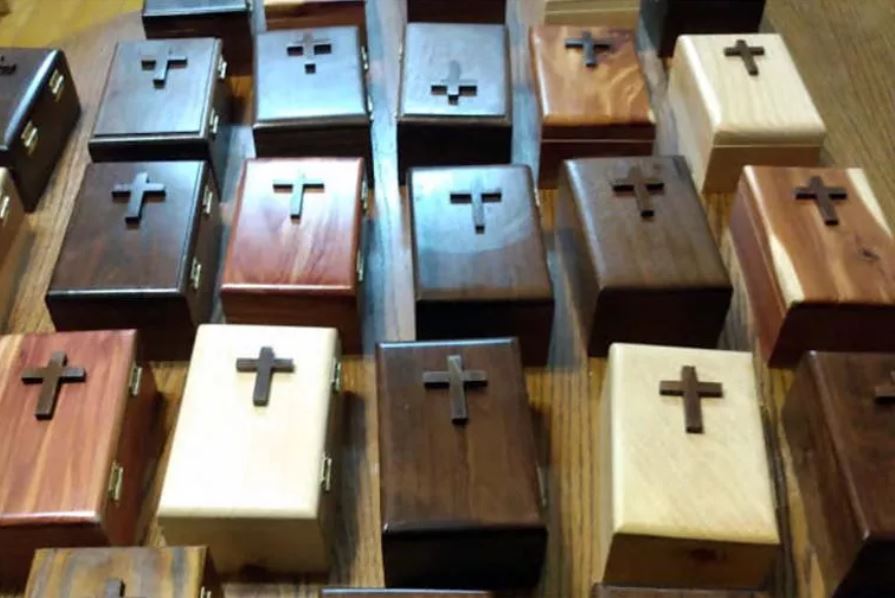 Love Them Both: Offering Healing to Women After Abortion

“Their past failure to express love for their child,” says woodworker Tom Furtado, “should not … prevent them from experiencing love for their babies now. Forgiveness is possible.”

For many years, this has been the counsel to pro-life advocates: to love both mother and baby. And to never stop loving, even after — perhaps especially after — abortion. The trouble is that this is easier said than done, largely because it is not always easy to know how to help women after abortion.

At least in some measure, one man’s efforts have proven insightful in answering the divine command to “love one another.”

Several years ago, Tom Furtado’s mother was stricken with a serious lung illness. While it was difficult for her to take in enough oxygen even under ideal conditions, doctors informed her that her ability to breathe could be threatened even by the simple, involuntary response of crying. If she cried, they said, her lungs would be unable to take in enough oxygen and would cease to operate. And so, she attempted to avoid crying.

This was about to prove very difficult.

During her bout with lung illness, one of her sons died. While it would be natural for any mother to weep at the terrible loss of a child, Mrs. Furtado had to fight the urge. Though her heart, soul, and mind told her to cry, she could not allow the tears to flow. She was able to breathe, but every maternal instinct in her was being suffocated — and that intensified her pain.

In his Summa Theologiae, Saint Thomas Aquinas comments that, in the act of crying, “inward sorrow is lessened.” He also warns about the effects of withholding tears, writing that “a hurtful thing hurts yet more if we keep it shut up, because the soul is more intent on it.” Seeing his mother’s terrible plight, Tom witnessed the angelic doctor’s insight firsthand.

But Tom was about to have an insight of his own.

As he watched this ordeal with his mother unfold, Tom thought back to an event years prior. It was a burial ceremony for aborted babies, and he found it impossible not to cry. As he mourned with his mother the loss of her son, it occurred to him that just as his own mother was not able to properly grieve the loss of a child, neither were the mothers of these babies. After all, the “pro-choice” narrative denied that there were any babies to begin with — that they were never really mothers in the first place. But as psychological studies indicate, many of these women come to know better over the ensuing months and years.

As a talented woodworker who fashions the wood from old barns into furniture, Tom went to his shop and built an oblong eight-inch by four-inch wooden box with a tiny cross on top. He called it a “memory box.” He had the notion that the box could serve as an acknowledgement and testimony that a real human child came into the world. Perhaps it would finally allow these women to grieve.

Tom explains his reasoning: “Their need and desire to grieve is every bit as real as that of any other parent who has lost a child. Unlike other parents, however, they have none of the supports to help them through it. In fact, half of our society dismisses their grief as unnecessary.”

Tom wasn’t sure what effect, if any, a memory box would have for mothers and for helping them heal from their post-abortive grief. But he was about to find out.

Word spread online that Tom was offering the boxes and shipping expenses free of charge, and requests from all over the country came pouring in. Soon, Tom found himself sending out a hundred boxes every month. Women who had benefitted from having a memory box posted their personal testimonies online. For unique and personal reasons, these boxes acted as a healing salve for each of these women — not to forgive and forget, but to forgive and remember.

Though they have sent him personal notes of thanks, Tom is extremely guarded about their privacy. But he does say that many women who have struggled to forgive themselves for years have been suddenly transformed:

“For the courageous women who honestly face the error of a past abortion, it is my hope that my boxes confirm what these women know, but never hear: they have a need to grieve — that their baby not only was, but is real. Their past failure to express love for their child should not and does not prevent them from experiencing love for their babies now. Forgiveness is possible.”

The word “empathy” is defined as an intentional acceptance of suffering with another. But a true practice of empathy experiences not only suffering, but healing and friendship. Tom’s apostolate is steeped in empathy.

For Tom, his apostolate — called “More Than A Memory” — is a desperately needed one. It has become a beautiful way to answer the call to love them both.