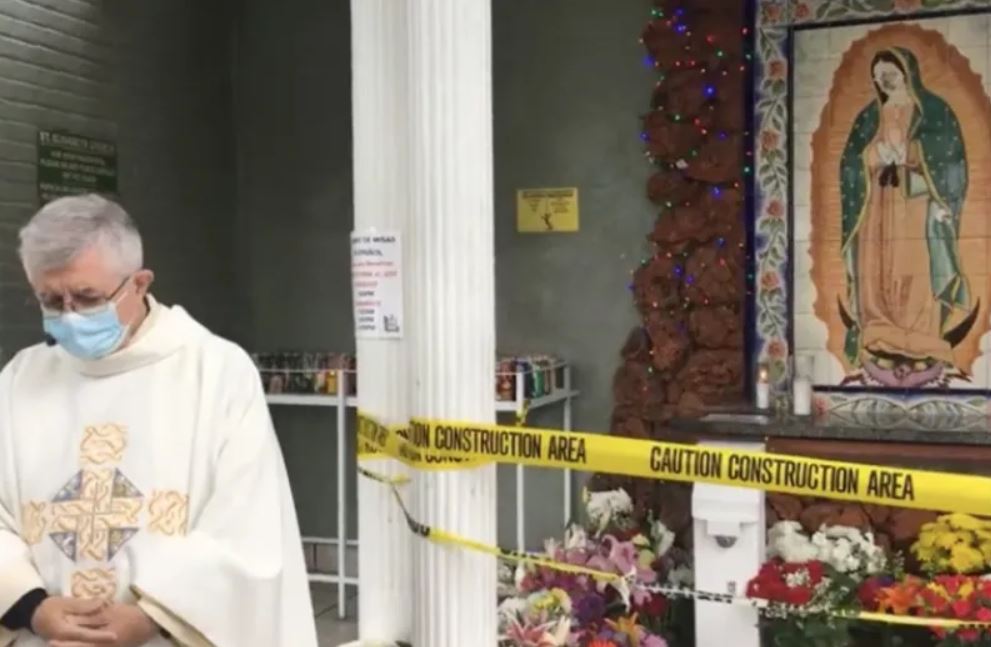 A masked man bashed a mural of Our Lady of Guadalupe with a sledgehammer last week, at a parish in the Archdiocese of Los Angeles.

“The Image of our Lady on Cedros Ave. has been severely vandalized. This is one of our saddest moments in addition to our pandemic times ever since,” stated the parish website for St. Elisabeth Catholic Church in Van Nuys, California.

Security camera footage reported showed a man hitting the parish’s 35-year-old mural 13 times at 1:40 am on April 21, the parish said.

The parish called the desecration an act of sacrilege against the Blessed Mother. They asked for donations to restore the tiles in the mural, and announced that plexiglass casing would be installed around it for security. Donations for restoration or for the plexiglass may be submitted through the parish website.

“I was speechless, and it was unbelievable,” Father Vito Di Marzio, the pastor, told KTLA5 news.

On April 21, the perpetrator was caught on video smashing the face of the Our Lady of Guadalupe mural in Van Nuys, California.

“It’s actually, for me, like doing it to your own mother,” Sister Angelie Marie Inoferio, principal of St. Elisabeth school, said to KTLA5.

“We cannot judge what is really inside of him, maybe it’s a cry for help,” Inoferio said. She said she was praying for the conversion of the perpetrator.

The parish held a prayer service in front of the vandalized mural last week, at which participants prayed the rosary and sang Marian hymns.

The act of vandalism follows other recent incidents at Catholic parishes in California.

On the weekend of April 17-18, three statues were vandalized outside Holy Rosary Catholic Church in Woodland, California. A statue of Mary was defaced with black spray paint at Saint John Vianney parish in Rancho Cordova, California.

Parishes around the country have been the targets of acts of vandalism and arson in the past year.

In April, the face on a statue of Jesus was spray painted black at Saint Mary’s Cathedral in the Fargo diocese. On March 13, the sidewalk outside Saint Joseph’s Parish on Capitol Hill in Washington D.C. was vandalized with what appeared to be satanic graffiti.

In early February three statues of angels at St. Pius X Church in El Paso, Texas, were toppled over and broken.

In early January, a statue of St. Therese of Lisieux was defaced with an upside-down cross, the word “satan,” and a pentagram, at St. Theresa of the Child Jesus parish in Abbeville, Louisiana.

How churches can respond to the CO...

The Scientific Method is a Catholi...