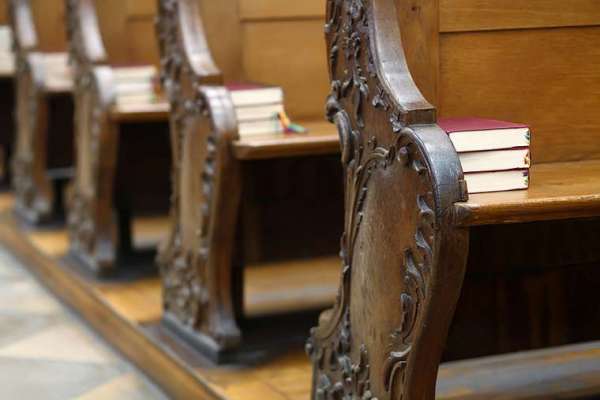 Edmonton, Canada, Jan 4, 2021 / 04:14 pm (CNA).- A 25-year-old man who late last year interrupted a Mass in Canada by exposing himself as part of a “prank video” has been charged with a hate crime and banned from all diocesan property.

Father George Puramadathil, the parish’s pastor, told CNA that he was celebrating the Mass when a young man approached the ambo and, speaking in Italian, “requested five minutes” with the priest.

Father Puramadathil said he assumed the young man was a member of the parish youth group, or in any case someone in need of help.

“I thought, ok, let him talk,” Puramadathil recalled thinking at first, but the young man switched to English and began shouting “very vulgar terms.” He then took out a bottle of wine from his pocket and began to open it, the priest recalled.

When Puramadathil approached the man and asked him to leave, the man descended from the ambo and “lowered his pants in front of the people” before running from the church and escaping over a fence.

Puramadathil reported the incident to the Archdiocese of Edmonton and to the police, and later learned that the suspect was wearing a camera and had posted a recording of the incident online. The video has since been removed.

Puramadathil said he believes the man had associates who picked him up in a car after he jumped the fence. He also later learned that the young man had several associates in the sanctuary who also were taking videos of the incident, and had registered to attend the Mass using false names.

The archdiocese announced Jan. 3 that the suspect had been charged, and that local police had banned him from entering Santa Maria Goretti church. In addition, the archdiocese has served the suspect a notice banning him from all diocesan property.

“The fact that one of the charges – mischief to religious property – is considered a hate crime, shows the seriousness of the incident. This kind of action cannot, and will not, be tolerated,” the archdiocese said in a statement.

Both the police and the archdiocese have declined to name the suspect publicly.

Several family members of the alleged conspirators have since telephoned Father Puramadathil to apologize for the prank, he said. The suspect’s family is registered at the parish, and the suspect was once an altar server at the church, the priest noted.

Archbishop Richard Smith of Edmonton celebrated Mass at the parish Dec. 20, meeting with parishioners and blessing the ambo where the incident occurred.

“Restoration and healing are needed, and so we turn to our loving God. God undoes by His blessing the harm done by evil acts,” Archbishop Smith told the congregation as quoted by Grandin Media.

“As I do, let us together implore God from our hearts for the grace of purification.”

The parish has reviewed its security since the incident and will place more volunteers and ushers at the back of the church, but the doors will remain unlocked during Mass, Grandin Media reported. Local police report there were at least 37 hate-related charges laid in Edmonton in 2020.

The incident in Alberta caps a year of apparent hate crimes directed against Catholic churches over the border in the United States, and around the world.

Across the US, churches and Catholic statues have been vandalized. Several incidents have involved statues of St. Junipero Serra, a founder of the mission system in what is now California.

Abroad, a recent report chronicled more than 500 hate crimes against Christians in Europe in 2019, included attacks against Catholic priests, arson attacks on Catholic churches, the destruction of images of the Virgin Mary, vandalism of a pregnancy counseling center, and the theft of consecrated Eucharistic hosts from tabernacles.

Awaken the Sleeping Giant: The Pow...