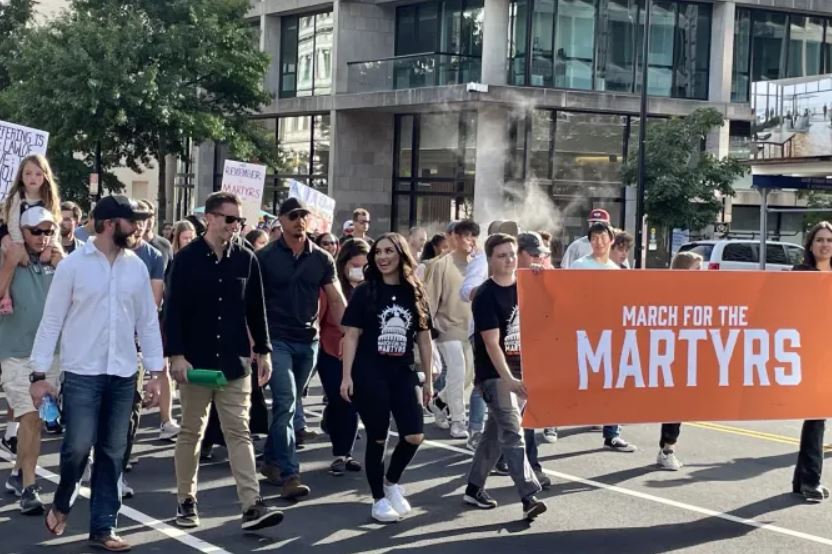 The second annual March for the Martyrs took place Saturday in Washington, D.C., featuring testimony from advocates for persecuted Christians and from survivors of persecution.

For Gia Chacon, president of the group For the Martyrs, which organized the Sept. 25 march, the day was centered on bringing awareness to “the global crisis of Christian persecution.”

“The reason that people don’t care about Christian persecution is because they just don’t know it’s happening,” Chacon told CNA. “When we look at countries throughout the Middle East, and even what’s happening now in Afghanistan–and it’s not just in the Middle East, it’s in China, it’s in North Korea, and actually in over 60 countries around the world.”

“It’s up to the body of Christ here in the United States to be [the persecuted Christians’] voice, otherwise our brothers and sisters are just suffering in silence,” she said.

While Chacon and the majority of For the Martyrs’ advisory board are Catholics, Saturday’s march was ecumenical and featured many speakers from Protestant ecclesial communities.

It is important, said Chachon, to “come together as one voice” to stand up for Christians overseas who are risking their lives when they worship God.

That sentiment was echoed by Fr. Benedict Kiely, the founder of Nasarean.org and a priest of the Personal Ordinariate of Our Lady of Walsingham. In 2014, Kiely decided to devote his life and ministry to serving and aiding the persecuted Church in the Middle East.

“There’s very little attention to the fact that Christians are the most persecuted religious group in the entire world. So any public display to raise awareness is very important,” he said to CNA.

Bridging division among Christians is another thing Kiely wanted to emphasize.

“I’ve heard it myself from the people of Iraq and Syria: when the Islamists come to cut your head off, they don’t ask if you’re a Catholic or a Protestant or Orthodox. They ask you if you believe in Jesus,” said Kiely. “That’s that point. That unites us. That’s what Pope Francis called ‘the ecumenism of blood.’”

For Fr. Vincent Woo, a native of Hong Kong and a priest of the Diocese of Hong Kong, the March for the Martyrs was more personal than many of the attendees.

“All the persecution of democracy activists in Hong Kong, the crackdown of freedom–it’s going to happen to the Church pretty soon,” he said. “This is a way to show solidarity with Christians all around the world, especially those who are persecuted.”

Social media played a key role in spreading the word about the March for the Martyrs. Dorothea Bauer, who traveled to Washington from Tampa, Florida, told CNA that she initially heard about the event on Instagram.

“I think it’s really beautiful that we’re giving a voice to our brothers and sisters in Christ across the world who are suffering for their faith,” said Bauer.

Payton Gibson, from Maryland, said that she was inspired to attend this year’s March for the Martyrs after seeing coverage of the event last year. She told CNA that she was struck hearing Chacon discuss her work with the persecuted Church and her travels overseas.

“It just kind of pulled at my heart, especially now that I’m in the D.C. area. It sounded like a great event,” said Gibson.

Saturday marked the move of the event to the east coast; last year’s March for the Martyrs took place in Long Beach, California. The move was both strategic and symbolic: Chacon said she wanted to garner the attention of powerful figures about helping persecuted Christians, and to further increase awareness of the cause.

“We’re just excited to be here in the nation’s capital, and sending a message today that Christian persecution will no longer be ignored,” said Chacon. “Our brothers and sisters in these countries are not forgotten, and that the Lord still has the victory.”

Alejandro Bermudez, executive director of Catholic News Agency, is an advisory board member of For the Martyrs.