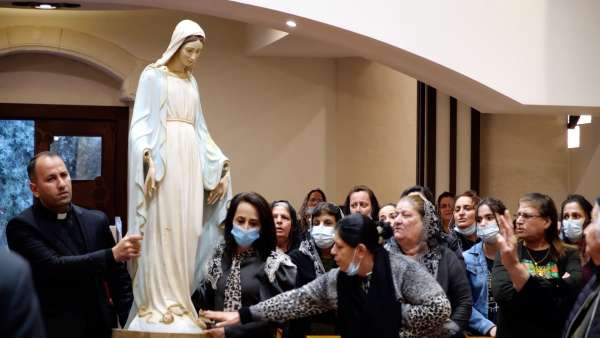 Mosul, Iraq, Mar 29, 2021 / 05:10 pm (CNA).- A statue of the Virgin Mary that had been desecrated by the Islamic State but was later restored has been returned to its original church.

The statue was decapitated, and its hands cut off, in Karemlesh, a largely Christian town 18 miles east of Mosul, during the Islamic State’s occupation of the villages in the Nineveh Plains from 2014 to 2017. It belongs to St. Adday church.

The statue has been partially restored. The original head was found in the rubble when the statue was recovered.

The head has been placed back onto the statue in a manner that still shows the damage from where it had been decapitated, and the hands dangle below the wrist.

It was present at Pope Francis’ March 7 Mass in Erbil.

The statue returned to Karemlesh March 18, and on March 19 it was placed in St. Adday church with a simple ceremony.

“Having Her here is a sign of courage and bravery for our people. That everyone can see that the destroyed and restored image returns to the church with a new appearance is a beautiful sign. This encourages them to have the courage to continue,” Fr. Thabet Habeb, pastor of St. Adday, told CNA.

He added that “after the Pope’s visit, we hope that there may be some attention to the Chaldean community.”

The Islamic State swept through large swathes of Syria and Iraq in 2014, giving families of Christians and other religious and ethnic minorities an ultimatum – convert to Islam, die, or leave.

In 2017 the Nineveh Plain was liberated from the rule of the Islamic State.

Catholics asked to support the Hol...