Mary Magdalene: The first witness to the Resurrection 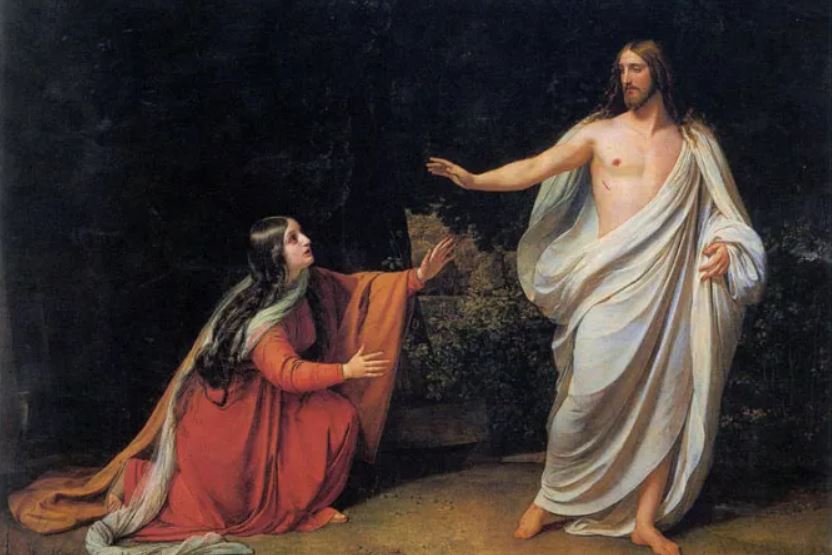 Mary Magdalene: The first witness to the Resurrection

“The Appearance of Christ to Mary Magdalene” by Alexander Ivanov, 1834-1836. / Wikimedia Commons.

July 22nd is the feast day of St. Mary Magdalene.

Not much is known about Mary Magdalene. She first appears in the Gospel of Luke as a follower of Christ from whom 7 demons have been cast out. In the Gospels, she is sometimes associated with two other women in Scripture: the woman who washes Jesus’ feet with oil and Mary, the sister of Martha and Lazarus.

Her most prominent position in scripture occurs in the Gospel of John, where she remains with Jesus at the crucifixion, keeps vigil at the tomb, and is the first to see him on Easter morning. Differing traditions have her evangelizing in Ephesus, while others place her in Marseille, France.

Her body has never been found.

Apart from the Blessed Virgin Mary, perhaps no other saint alive during the time of Christ appears to have been as deeply moved by Jesus’ death as today’s saint.

“How beautiful to think that the first appearance of the Risen One took place in such a personal way! That there is someone who knows us, who sees our suffering and delusion, who is moved by us, and who calls us by name,” said Pope Francis of the encounter in a general audience the year after upgrading her memorial to a feast day.

After this shocking encounter, the joy of Christ’s Resurrection imbued her with the courage to spread this good news joyfully. “I have seen the Lord!” she proclaimed to the apostles and the whole world. Once known as a sinful woman, Mary Magdalene becomes the Apostle to the Apostles, the first witness to the Resurrection, and the model of a personal encounter with Jesus Christ risen from the grave.

“God surprises her in the most unexpected way,” opined Pope Francis, “So that woman, who is the first to encounter Jesus…now has become an apostle of the new and greatest hope.”

She overcame adversity with faith...