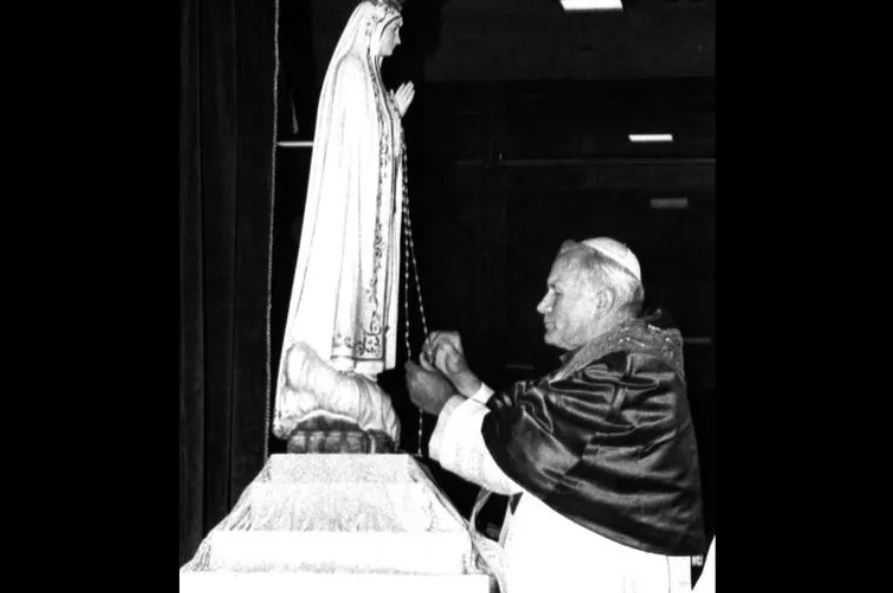 The Polish Pope encapsulated Our Lady’s message when he gave his 1982 homily at the Portugal shrine.

In 1982, Mother’s Day fell on Sunday, May 9, just as it did this year. That same week in 1982, four days later, St. John Paul II celebrated Mother’s Day in an exceptional way. He went to the Shrine of Our Lady of Fatima in Portugal on Mary’s feast day, May 13, to give thanks to God and his Mother Mary for sparing his life during an assassination attempt the previous year.

He encapsulated what this Mother’s day was all about in the title he gave his homily — “Mary’s Maternal Love.”

“Mary’s motherhood in our regard is manifested in a particular way in the places where she meets us: her dwelling places; places in which a special presence of the Mother is felt,” John Paul II said. He listed many such places, from a special corner in one’s home to Marian shrines, where we can bring her our own problems and those of “the family, of societies, of nations and of the whole of humanity.”

Barb Ernster is communications manager for the World Apostolate of Fatima, USA, and a wife and mother of three, ages 19 to 25. She always found this heartfelt wisdom of the saintly pontiff to be true. “Mary has been a refuge for me in all of my battles — spiritual and earthly — and she always leads me to a place of peace and trust in Jesus,” she said. “As a mother, I can relate to her standing at the foot of the cross, when all she could do was watch her Son suffer and keep trusting in God’s plan. It is seemingly the most hopeless place on earth in all of human history — the foot of the cross. Yet, there she was, firm in her resolve to stay with Christ and trust. That’s where I go when I need her as a mother.” Ernster has personally experienced our Blessed Mother’s presence and help at a very difficult time in her family life. “It was because of her that I was able to trust firmly in Jesus. That is what all of us as mothers want for our children. Surely, the Mother of God wants this even more.”

“The Blessed Mother is a Mother for all of us,” he noted.

“She doesn’t discriminate. She is not only our lifeline to Jesus, but she is always with us in our moments of joy and failings in life. We can always go to our Mother in heaven for comfort and help.”

John Paul II emphasized in his May 13, 1982, address, “Since Mary is the mother of us all, her care for the life of man is universal.” Through Mary’s spiritual motherhood — which is “therefore a sharing in the power of the Holy Spirit, of ‘the giver of life’” — we should “seek to understand the extraordinary message” of Fatima and put it into practice, the Pope explained.

Mark Miravalle, who holds the St. John Paul II Chair of Mariology at Franciscan University of Steubenville, said, “It’s clear at Fatima she is the spokeswoman of her Son’s will. Our Lady’s role is not arbitrary; it is providential.”

“John Paul II’s greatest contribution to Mariology was his emphasis on Mary’s maternal mediation — to always understand Our Lady’s mediation for humanity as a mother as far as being tender, and personal, and very powerful,” explained Miravalle. “In Redemptoris Mater, John Paul II said that Mary acts ‘not as an outsider,’ but as a ‘mother’ and a ‘mediatrix.’ And he goes on to say ‘she has the right to do so’; then he calls Our Lady ‘the spokeswoman of her Son’s will.’”

An author, international speaker and president of the International Marian Association, Miravalle said, “Every apparition is an expression of her motherly solicitude for humanity,” and that is especially manifested “at Fatima, when she calls for the daily Rosary, the Five First Saturday devotion” and conversion.

This is “her defining characteristic in relation to her Son and to us. That’s why John Paul II calls her the mother of all peoples,” Miravalle added. “Jesus doesn’t simply invite us to accept his Mother as our Mother.” It becomes a theological fact when, he explained, from the cross, “he said, ‘Behold your mother.’ The question for us is how do we begin to receive her and respond to her. At Fatima she is calling the world, as the world’s Mother, to return to her divine Son and to his Gospel. And also as a good mother will do — mothers admonish as well — Our Lady said, ‘If we don’t listen, it will not bode well for the human family. We will have more wars and the annihilation of nations.’”

Miravalle also pointed out, “The month of May, the month we honor motherhood with the secular celebration of Mother’s Day, is all the more reason we should redouble our focus and our love on the Mother of all people, given us by Jesus. It’s her defining character to Jesus and to us. We need the Mother of all.”

Tying Mother’s Day and Fatima together, Miravalle spoke of how, in Our Lady’s July 13, 1917, message, she again said “‘to pray the Rosary every day … in order to obtain peace for the world and the end of the war, for only I alone can help you.’ One can wonder: What about the Trinity? Don’t they care about the world’s people? Of course. This is a confirmation that the peace plan for humanity has been given to the Mother, and the more quickly we accept her motherly intercession, the sooner we will receive the great Fatima promise that, ‘In the end, my Immaculate Heart will triumph … and a period of peace will be granted to the world.’”

Miravalle also described how, at Akita, Japan, on Oct. 13, 1973, Our Lady appeared and similarly said, “I alone am able still to save you from the calamities which approach.”

“She is identifying that it’s God’s will that the peace in the world comes through her. The sooner we acknowledge her intercession and the authority and power God has given her to do this, the sooner we will experience the fruit of the promise of peace for the world,” Miravalle said.

Preiss reaffirms this message: “She was sent on a mission at Fatima for the world as a universal loving Mother concerned for her children with a message of hope.”

Focusing on Mary’s motherly concern, John Paul II pointed out the message’s core: a call to conversion and repentance.

“The call to repentance is a motherly one, and at the same time it is strong and decisive. The love that ‘rejoices in the truth’ is capable of being clear-cut and firm.” Because repentance and prayer must go hand in hand, our Blessed Mother calls us especially to the Rosary, “the prayer in which she feels particularly united with us. She herself prays with us.”

“We should listen to Our Lady at Fatima,” Preiss told the Register, because she is the heart of the Holy Family and requested that we pray the Rosary “for peace not only from war but peace within our families. … She wants us to have happy and holy families.”

John Paul II also stated in the same 1982 address, “[W]hile the message of Our Lady of Fatima is a motherly one, it is also strong and decisive. … It invites to repentance. It gives a warning. It calls to prayer. It recommends the Rosary. The message is addressed to every human being.”

Ernster spoke of this Marian call to action: “Like St. John the Apostle, the Fatima message asks us to take Mary into our homes and, more specifically, into our hearts. One of the main reasons she came to her children on earth at Fatima was to establish worldwide a special devotion to her Immaculate Heart. Her famous words to Lucia on June 13, 1917, are for everyone for all time: ‘Do not lose heart. I will never forsake you. My Immaculate Heart will be your refuge and the way that will lead you to God.’”

The faithful can repay our Mother by practicing what she told the world at Fatima because, as John Paul II said, “In the light of a mother’s love we realize the whole message of the Lady of Fatima.”

Mary Crowned In Glory: A Mystic’s...