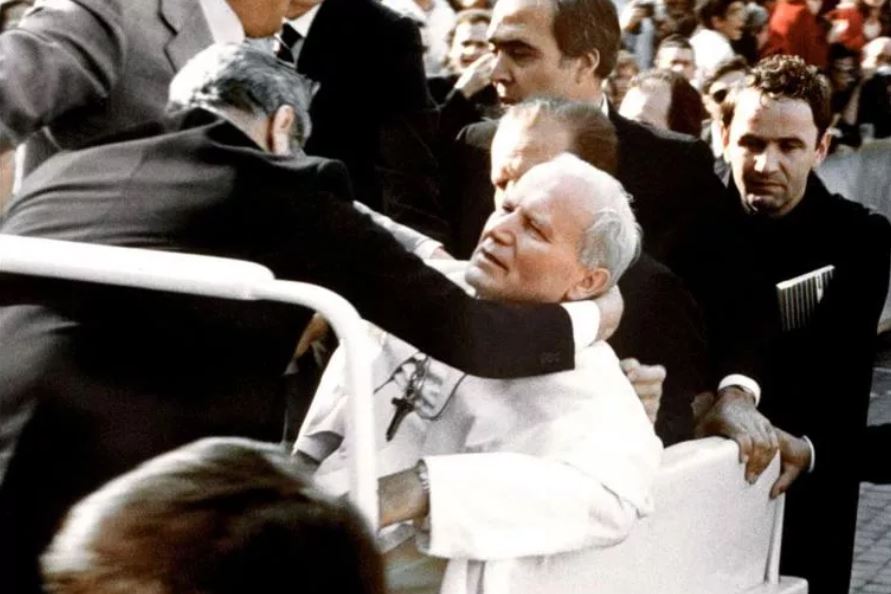 COMMENTARY: The saint was convinced he was saved by the Blessed Mother’s intercession in 1981.

Forty years ago, on May 13, 1981, Pope John Paul II stepped into his vehicle to ride through St. Peter’s Square and greet an ecstatic crowd. It was a lovely Wednesday in Rome and a special day spiritually: It was the feast day of Our Lady of Fatima.

There that day was a Muslim Turk named Mehmet Ali Agca. He had a job to do, and he wasn’t working alone. He would later name seven accomplices, all conspiring under a plan conceived by the Bulgarian secret services, one of the communist world’s most restrictive intelligence services and the one most subject to Moscow’s control. The Bulgarian communists were stooges to the Soviet KGB and its military intelligence counterpart, the GRU.

On the morning of May 13, Agca and his collaborators drove to the Vatican. The driver was a Bulgarian named Zelio Vasilev. He gave instructions to Agca and his Turkish friend, Oral Celik, telling them that Sergei Antonov, another Bulgarian conspirator, would help them escape after they finished their bloody assignment. Antonov, according to the plan, would whisk away the assassins to a large delivery truck concealed as a Bulgarian household-goods company. With that, at 10am, the Bulgarians drove off, leaving the Turks to do their dirty work.

The Turks would wait quite a while. At 3pm, Antonov reconnected with Agca and Celik in the Piazza della Repubblica. He was driving a blue sports car. With him was another Bulgarian, Todor Aivazov. They handed the Turks two packages, one with a 9mm Browning handgun and the other with a diversion bomb to scatter the crowd after the shooting.

The crime would still wait another couple of hours. As they waited longer still, the Polish Pontiff at last began to move assuredly along in his white Fiat “popemobile,” waving to the excited gathering, grabbing hands and giving kisses, lifting children in his arms.

As John Paul II drew closer, the 23-year-old Agca anxiously clutched his concealed 9mm semi-automatic. It was now past 5pm as the Pontiff finally approached within a few yards of Agca.

His vehicle passed the ancient obelisk in the center of St. Peter’s Square, where Peter himself two millennia earlier would have passed on his way to his martyrdom at the hands of the enemies of the Church.

As the Pope edged closer toward a similar fate in the square, the Turkish national lifted his pistol above those between him and the man in the white robe.

He squeezed the trigger four times. Two of his shots hit the Pope, who immediately slunk down into the arms of his Polish aide, Father Stanisław Dziwisz.

“Are you hit?” the stunned secretary asked his fallen friend.

“In the stomach,” the Pope replied.

As the Holy Father made his pleas to heaven, all hell broke loose among the conspirators. Celik fled the scene in panic, failing to ignite his panic bomb. He would not be seen again. Likewise bolting was Agca, who had previously written in his plan of escape: “Wear a cross … and wear tennis shoes.” He would come disguised as a Christian and ready to run. He dashed off, only to be grabbed by a sturdy nun, a Franciscan sister named Sister Letizia, from Bergamo.

“Why did you do it?” the nun reprimanded the shooter, to which Agca barked, “Not me! Not me!” She responded sternly, “Yes, you! It was you!” as Agca struggled to break her grip.

Unbeknownst to Agca, Sister Letizia was inadvertently saving his life. His communist buddies were intending to murder him as soon as he got into the truck.

They intended to assassinate the assassin; kill the killer. John Paul II wouldn’t have been surprised by that. He knew that such was how communists valued life.

The fallen Pope was rushed into an ambulance that sped through the interior of the Vatican to Porta Sant’Anna, a side gate named for the mother of the Blessed Mother. From there, the ambulance headed straight for Gemelli Hospital, the teaching hospital of the Catholic University of the Sacred Heart. It was one of Rome’s best hospitals, though traffic was almost impassable. Providentially, a Gemelli physician happened to be nearby and hopped inside the ambulance.

John Paul II was barely conscious when he got to the hospital.

“How could they do it?” he told a nurse before losing consciousness. Who he meant with the plural “they” was not specified. But this Polish Pontiff, Public Enemy No. 1 to the communist empire, apparently had a hunch. A single shooter had shot him, but something told him the shooter wasn’t acting alone.

“I did it immediately,” recalled Cardinal Dziwisz later, “but I was completely torn up inside. … The Pope was fading.” Quietly groaning, his voice getting weaker, praying, Father Dziwisz could hear his fellow Pole saying, “Jesus; Mother Mary.”

His prayers were being silently answered.

One of Gemelli’s three chief surgeons, Dr. Francesco Crucitti, had been across town at another hospital when he heard the news. He dashed to his car and sped down the wrong side of a two-way street. When Crucitti got inside the hospital, he was pleasantly surprised to find that some “unknown genius” (as he put it) had opened the doors of every elevator in the frenetic hospital, awaiting his choice for a fast journey to the ninth floor. When he burst through the doors, Crucitti was mobbed by nurses who placed him in surgical gown and shoes. He looked grimly at the patient, whose blood pressure had plummeted. With the leader of the Church laid open before him, Dr. Crucitti found “blood everywhere.”

The Pontiff underwent five and a half hours of surgery, requiring a transfusion of six pints of blood.

The emergency team at Gemelli discovered that the bullet fired at point-blank range had just missed the main abdominal artery.

A few centimeters over and the Pope could have easily bled to death in the ambulance.

“A few more minutes, some [traffic] obstruction along the way,” recalled Cardinal Dziwisz, “and it would have been fatal.”

A long, intricate procedure followed, but the Pontiff’s life was secured. Still, for three days after the May 13 shooting, he suffered terribly.

And how auspicious was May 13? It was the exact date that the Lady had first appeared to Lúcia dos Santos and Jacinta and Francisco Marto in Fatima, Portugal, 64 years earlier.

And John Paul II was convinced that the protective hand of the Blessed Mother had intervened again. She had materialized on the scene in Portugal exactly 64 years earlier, and she had mystically entered the scene again this May 13, 1981.

Of course, the Lady’s message at Fatima had included dire warnings about atheistic communism and Bolshevik Russia spreading its crimes and “errors” worldwide, including a Third Secret that the Polish Pope, up to that point, had not yet personally read, even three years into his papacy. Something told him that now was the time. Reflecting on the two dates — May 13, 1981, and May 13, 1917 — he thought to himself: “Two thirteenths of May!”

“He started reflecting on what was, to say the least, an extraordinary coincidence,” said Father Dziwisz. “Two thirteenths of May! One in 1917, when the Virgin of Fatima appeared for the first time, and one in 1981, when they tried to kill him. After pondering it for a while, the Pope finally requested to see the Third Secret.”

The Third Secret, revealed by Mary to the three children, had been sealed in the archives of the Congregation for the Doctrine of the Faith. On July 18, 1981, the then-prefect for the congregation, Cardinal Franjo Šeper, grabbed two envelopes — a white one containing Sister Lúcia’s original Portuguese text and an orange one with an Italian translation.

These were taken to the Pope on the ninth floor of the Gemelli Clinic. It was there that the Holy Father read the secret, which pointed to a deadly attack on the “bishop dressed in white” — that is, the one bishop who wears white, the Bishop of Rome.

“When he was finished,” said Cardinal Dziwisz of Pope John Paul II reading the Third Secret, “all his remaining doubts were gone.” In this vision, “he recognized his own destiny.” He became convinced that his life had been spared thanks to the intervention of Our Lady.

Cardinal Dziwisz acknowledged that it is indeed true that in the Fatima vision the “bishop dressed in white” is killed. He saw this as not an inconsistency: “So? Couldn’t that have been the real point of the vision? Couldn’t it have been trying to tell us that the paths of history, of human existence, are not necessarily fixed in advance?” (This was likewise the interpretation of Cardinal Joseph Ratzinger in his theological commentary on the Third Secret upon its announcement in May 2000.) Could it not have been an illustration that a heavenly hand can intervene and cause a certain shooter to miss?

“One hand shot, and another guided the bullet,” was how John Paul II put it.

Five months later, after the attack, the Holy Father reconvened with the faithful in St. Peter’s Square, where he acknowledged his debt to the Blessed Mother: “Could I forget that the event [shooting] in St. Peter’s Square took place at the date and at the hour when the first appearance of the Mother of Christ to the poor little peasants has been remembered for over 60 years at Fatima in Portugal?”

“For, in everything that happened to me on that very day,” said the Pope, “I felt that extraordinary motherly protection and care, which turned out to be stronger than the deadly bullet.”

In his mind, it all seemed connected, from the protectors to the perpetrators. As to the latter, the communists had tried to kill the Pope. It was another of the crimes to come foretold at Fatima.

Of course, in that primary task, communism failed. And it would be left to this pope, and allies like Ronald Reagan and Margaret Thatcher and the people of Poland and more, to instead kill Soviet communism.

John Paul II survived on May 13, 1981, to join with other forces to help take down an evil empire.

Children Claim Our Lady of Fatima...