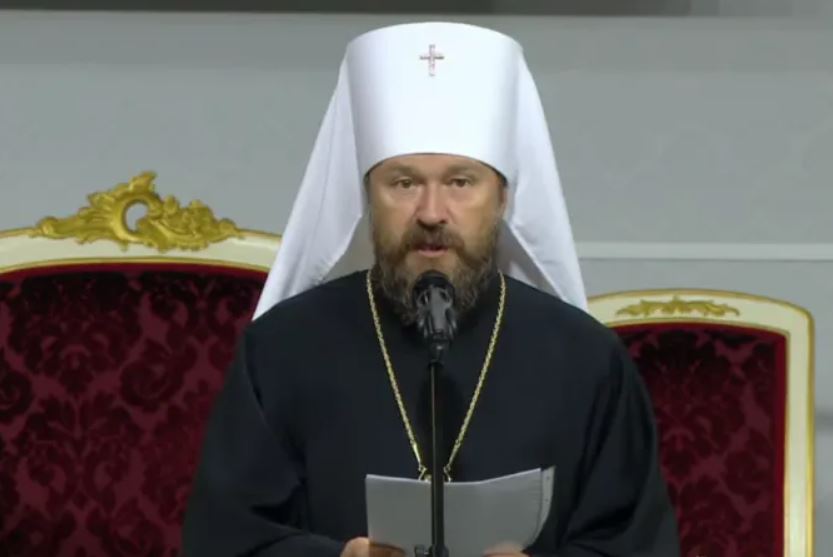 A Russian Orthodox leader said on Monday that belief in Christ’s Real Presence in the Eucharist unites Catholics and Orthodox believers despite their divisions.

Delivering the opening catechesis at the 52nd International Eucharistic Congress in Budapest, Hungary, on Sept. 6, Metropolitan Hilarion outlined the Orthodox understanding of the Eucharist.

“The Catholics and the Orthodox are not united in the Eucharist, but they are united in the conviction that in the Eucharistic bread and wine after their consecration we have not just the symbolic presence of Christ, but his full and real presence,” said the chairman of the Department for External Church Relations of the Moscow Patriarchate.

“We believe that the bread and wine of the Eucharist are the true body and blood of our Lord Jesus Christ. The Eucharistic celebration is not only a commemoration of the Last Supper, but also its actualization for each believer who participates in it.”

“And the celebrant does not act in the Eucharist on his own behalf. It is on behalf of Jesus Christ himself that he pronounces the words originally uttered by Christ at his Last Supper. And it is Christ himself who administers the sacrament for his followers, not a priest or a bishop.”

The 52nd International Eucharistic Congress opened on Sept. 5 with a 1,000-strong choir and a Mass featuring First Communions.

📹HIGHLIGHTS | The 52nd International Eucharistic Congress kicked off with an opening Mass, a 1,000-strong choir and First Communions in the center of Budapest, Hungary.
The #IEC2021 will culminate on Sept. 12 with a closing Mass offered by Pope Francis. #iec2021budapest pic.twitter.com/GLPxJTMBHt

The live-streamed Mass was celebrated by Cardinal Angelo Bagnasco, the retired archbishop of Genoa and president of the Council of the Bishops’ Conferences of Europe (CCEE).

Preaching at the Mass in Heroes’ Square, Bagnasco said: “I bid you a warm welcome, those who represent Christian peoples, in this historically important square. I owe a debt of great thanks to the Church in Hungary, who, led by their bishops, are the hosts of the International Eucharistic Congress.”

“In this hour, the tolling of the bells of the nation and the city resound like a choir and proclaim their embrace of all of humanity. From this pulpit, the words of pastors, the voices of this stirring and enormous congregation humbly and happily strive to speak to the heart of Europe’s peoples, and beyond that everyone, to the very edges of the Earth.”

He continued: “Our voices are weak, but in them echoes the voices of millennia and the blood of martyrs enlivens them. We proclaim to everyone who is listening to us that our joy is greater than all, Jesus Christ Himself! Humanity desires for the Eternal God. It wanders towards the Light! With today’s Holy Mass, we say that despite our weakness and sins, the light of Christ shines forth in the Church.”

Cardinal Péter Erdő, the archbishop of Esztergom-Budapest and Primate of Hungary, also spoke at the Mass.

In an introductory message, he said: “May God grant that in these days we especially sense that Christ is with us in the Eucharist, that he does not abandon His Church, His people, humanity. All our strength and hope flows from Him!”

“The Eucharist is the source from which the mission and our Christian life is nourished. Lord Christ, be with Us! Grant us strength and light for our mission in the modern world! Grant that we may live with you here on Earth and later in eternity!”

The congress was originally scheduled to take place in 2020 but was postponed to 2021 due to the coronavirus pandemic.

The week-long event will culminate on Sept. 12 with a closing Mass celebrated by Pope Francis in Heroes’ Square.

In his catechesis at the Hungexpo Budapest Congress and Exhibition Center, the main congress venue, Metropolitan Hilarion used Eastern Christian iconography to explain Orthodox teaching on the Eucharist.

“I suppose many of you had a chance to visit ancient Byzantine churches in whose walls you could see frescoes or mosaics. Very often figures of the saints are arranged in rows, one row below another,” the 55-year-old theologian said.

“You might see prophets in the highest row, below them the apostles, then the martyrs, then the holy bishops and monks. But there are no figures in the bottom row. The idea is, in fact, that this row is reserved for those who are present in the church, that is, for the parishioners. Together with the saints, they participate in the heavenly mystery of the Holy Eucharist.”

“And when the priest goes out of the altar with a censer, he first censes the icons of the saints, but then the parishioners, and he bows to the parishioners in the same way as he does to the saints. By doing so, he shows that the parishioners are of no less importance for him, or for the Church, or for Christ himself, than the saints who already share with Christ his heavenly glory.”

He continued: “They have achieved the goal, while we are on the way. But the way to salvation is unthinkable without the Eucharist. There is no salvation without the Church: this is the conviction that we all share, both the Catholics and the Orthodox, even though we locate the Church in a somewhat different way.”

“But the Church is inconceivable without the Eucharist. Therefore, the very notions of the Church, and of the Eucharist, and of salvation are linked inseparably in our theology.”

The Catholic Church and the Orthodox Church are respectively the world’s largest and second-largest Christian communions. There are around 1.3 billion Catholics worldwide and 220 million Orthodox Christians, including 110 million members of the Russian Orthodox Church.

The split between Western and Eastern Christianity can be traced back to the Great Schism of 1054, the result of both political and theological differences between the Latin West and Greek East.

Hilarion, who is also a Church historian and composer, explained that the Greek Church Fathers used the term “theosis” when they spoke about salvation. This word, he said, means “deification” and refers to the process by which a human being is fully united to God.

“For the Orthodox Church, the Eucharist is the most powerful means to achieve this goal of the Christian life which is called deification,” he said.

“In what way? When we receive the Holy Communion, Christ’s body penetrates our body, and his blood begins to flow in our veins. And it is not only in our mind and in our heart that we are united with Christ, but also in our body. Like in Christ himself the entire human nature — body, soul, and spirit — was united with God, so also our entire humanity participates in the process of deification.”

He said that this belief was “the most striking difference” between Christianity and other monotheistic religions.

“For us Christians, however, it is the very core of our theology. We might differ in terminology, some would rather use Latin terms instead of the Greek ones, but we all, I would argue, share this deep belief in the possibility of such union,” he commented.

Other speakers on Monday included the Brazilian Cardinal Orani João Tempesta. The 71-year-old archbishop of Rio de Janeiro was originally expected to offer a catechesis in person, but instead delivered a reflection via video after he was diagnosed with pneumonia.

The morning also featured a testimony by Fr. Konstantin Szabó, a Greek Catholic priest who undertook his seminary studies in secret in the Soviet Union.

In his catechesis, Metropolitan Hilarion said that Christians did not reach the goal of “deification” simply by receiving the Eucharist.

“If this were the case, all the partakers of the body and blood of Christ would have become saints,” he reflected. “The paradox is that while Christ is fully united with us when his body and blood enter our body and blood, we are not always able to be united with him. He is inside us, but we are often outside him.”

“Why is this? Either because in our daily life we do not follow his commandments, or because while our body is standing in the church our mind and heart are elsewhere, or because our sins stand as an impenetrable wall between us and God, or for all sorts of other reasons.”

He suggested that Orthodox liturgies were lengthy — lasting for two or three hours — to help Christians acclimate to the kingdom of God.

“But there is a huge distance between who we are and who we are called to be. And in fact, it is not many people who achieve the state of deification. The goal is too sublime, and much spiritual effort is needed to achieve it,” he said.

Hilarion drew on the writings of the Byzantine monk Symeon the New Theologian (949-1022) to illustrate how “conscious” reception of Holy Communion can help Christians in their quest for “deification.”

“What I tried to give you was just a glimpse into the Orthodox understanding of the Eucharist as it is expressed in the liturgy, in visual art, in liturgical hymns, and in theological writings of the fathers,” he said.

“I do not claim that everybody in the Orthodox Church is deified and becomes a saint. Not at all! We are just unworthy keepers of the rich tradition which came down to us from Christ himself and from the early fathers of the Church.”

“Some of these riches I wanted to share with you, and I am most grateful to the organizers of the congress for giving me such opportunity.”

The morning ended with a Mass celebrated by Archbishop Piero Marini, president of the Pontifical Committee for International Eucharistic Congresses, at the Hungexpo center.

In his homily, the 79-year-old Italian archbishop, who served as Master of Pontifical Liturgical Celebrations from 1987 to 2007, reflected on the nature of the Mass.

He said: “The Eucharistic Congress is an occasion offered to all believers: the Eucharist is waiting to be lived on the path of daily life. To live by the liturgy that is celebrated means to live by what the liturgy brings to life: the forgiveness invoked and given, the word of God heard, the thanksgiving raised, the Eucharist received as communion.”

He concluded: “May this Eucharistic Congress teach us that celebrating the Eucharist is always for us to bring to fulfillment the law of love that we receive from the Lord and that the Lord wants us to transmit to others.”

Meet the Catholic nun who has help...