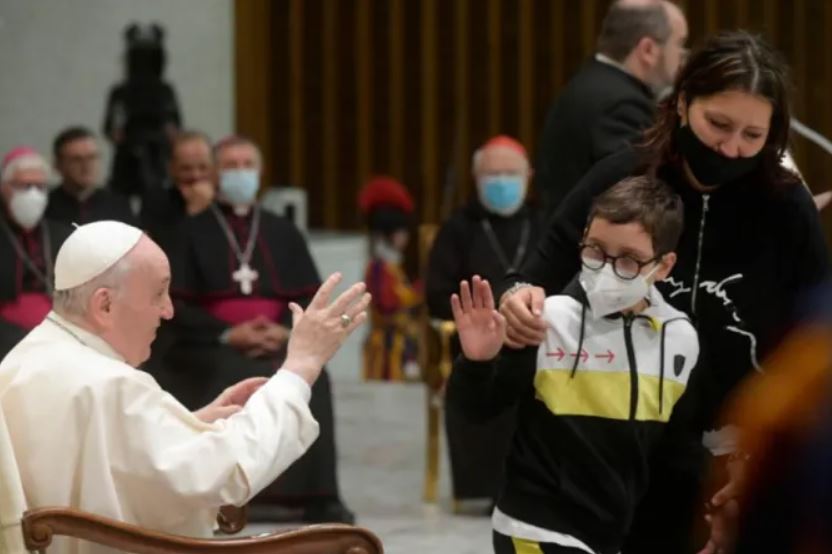 Pope Francis with Paolo Bonavita and Elsa Morra at his general audience in the Paul VI Hall at the Vatican, Oct. 20, 2021 / Vatican Media.

It was one of the viral Vatican moments of 2021: a boy in a black tracksuit, spectacles, and a face mask spontaneously walking up to greet Pope Francis in the middle of a general audience.

But there was more to the impromptu encounter in October than met the eye: the 10-year-old suffered from epilepsy and autism. His health had recently declined so severely that doctors feared he might have a brain tumor.

Paolo Bonavita was in Rome that day for medical tests. His mother, Elsa Morra, told CNA that the papal audience was followed by an inexplicable improvement in her son’s condition.

‘The Lord was with him that day’

At the start of the live-streamed audience on Oct. 20, Bonavita unexpectedly walked up the steps toward the pope at the Vatican’s Paul VI Hall.

“Paolo did not have the strength to go up. In fact, when Paolo goes down the stairs he needs a support, a hand, or a handrail. But that day he was able to go up alone,” Morra said in an interview with CNA via an instant messaging platform.

“He stumbled a little, two or three times, but he immediately had the instinct to get up again. The Lord was with him that day, close by, He had given him His hand, I’m convinced of it.”

"And Jesus tells us: 'You too, if you do not behave like children, you will not enter the Kingdom of Heaven'. The courage to approach the Lord, to be open to the Lord, not to be afraid of the Lord: I thank this child for the lesson he has given us all." @Pontifex pic.twitter.com/lJAbZ6GKYP

When Paolo approached Francis, the pope smiled and clasped the boy’s hand.

Msgr. Leonardo Sapienza, the regent of the Prefecture of the Papal Household, who sits to the pope’s right at general audiences, rose and gave his seat to Bonavita. Pilgrims applauded and Paolo joined them, enthusiastically clapping his hands. 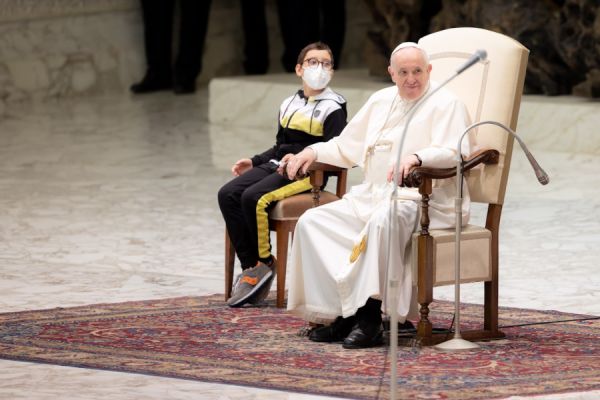 The boy sat briefly on his hands, before standing in front of the pope again and bouncing on his toes. Pope Francis’ zucchetto caught his attention and he pointed it out to Sapienza, who was now seated behind the pontiff.

Paolo then led a priest who was about to give a reading over to the pope to show him the white papal skullcap. Eventually, the boy walked back down from the platform proudly wearing his own zucchetto.

Pope Francis thanked Bonavita in off-the-cuff remarks at the start of his general audience address.

“The courage to approach the Lord, to be open to the Lord, not to be afraid of the Lord: I thank this child for the lesson he has given us all,” he said.

“And may the Lord help him in his limitation, in his growth because he has given this testimony that came from his heart. Children do not have an automatic translator from the heart to life: the heart takes the lead.”

‘The impossible does not exist for you’

Morra, who lives in southeast Italy, was staying with Paolo at a hotel near St. Peter’s Square. On the morning of the general audience, they had breakfast and left the hotel, planning to take an open-top sightseeing bus tour of Rome.

As they passed the Vatican, they noticed a long line of people. When Morra asked what was happening, she was told that it was the queue for the pope’s general audience. She wanted to attend but was informed that it was impossible without a reservation.

The woman happened to be a leader in the group Unitalsi, an Italian association helping ill, elderly, and disabled people to make pilgrimages. She said she could get them into the audience.

The mother and son initially sat in the fourth row in the audience hall, but they were invited to move to the front.

Morra took off Paolo’s hat, scarf, and jacket. She turned to put her own jacket on the back of the chair when her son began to walk up the steps of the platform towards the pope.

She called out, “Paolo, come here!” But nearby Swiss Guards assured her that the pope was happy for the child to approach him.

Later, Pope Francis greeted Morra. He took her hand and said: “Signora, forza! The impossible does not exist for you. I will be close to you in prayer. Keep going. You have done so much for your son. You are a super mom.”

Morra received a phone call that evening, asking her to bring Paolo for tests in their home city of Bari the following day.

Doctors were concerned that Paolo had very high levels of prolactin, a protein secreted from the pituitary gland, which can rise following epileptic seizures.

The mother and son attended the appointment on Oct. 21. Three days later, a doctor called Morra to tell her that Paolo’s prolactin level had fallen from a high of 157 to 106, though medics did not know how or why.

Morra said that she and Paolo returned to Rome on Nov. 5 for further tests.

“Within two weeks [Paolo’s prolactin level] dropped to 26, which is another 80 points lower,” she explained.

He also recorded an increased level of hemoglobin, the protein that carries oxygen around the body, which is critical for Paolo as he suffers from the blood disorder thalassemia.

Morra said that doctors were able to rule out the hypotheses that Paolo was suffering from a tumor or sclerosis, a scarring in the brain.

This was an enormous relief for his mother, who worried that her son might not be able to withstand the rigors of surgery. She feared that an operation would lead to Paolo being confined to a wheelchair, or perhaps even dying.

Speaking to CBS News last November, Morra was asked what she would like to say to Pope Francis following the life-changing meeting with her son.

“Thank you for the miracle,” she said.

The interview with Elsa Morra was conducted by Giulio Capece for CNA.

The Challenges Before Us

Brazil to have a statue of Jesus l...