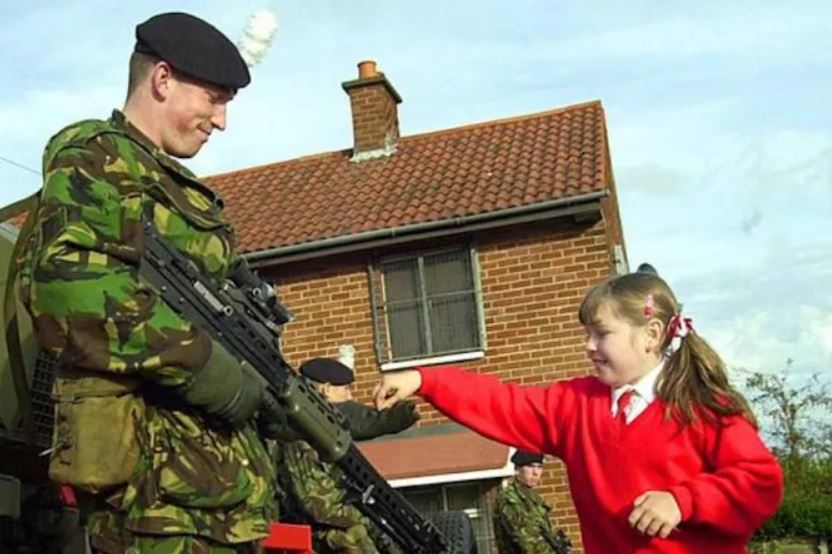 A pupil from Holy Cross Girls’ School with a soldier from the Argyll and Sutherland Highlanders. / public domain.

The British government has announced a plan to halt all prosecutions related to the 20th century religious-fueled conflicts in Northern Ireland known as the Troubles, drawing criticism from the Archbishop of Armagh.

The proposition, brought by Northern Ireland Secretary of State Brandon Lewis, would impose a statute of limitations that would effectively ban legal proceedings on all Troubles-related incidents.

Archbishop Eamon Martin of Armagh wrote in a July 15 letter that in light of the UK government’s plan, “it is disturbing that victims and survivors, those who have paid the highest price for the fragile peace we all enjoy today, once more feel marginalised and neglected.”

The proposal would also end legacy inquests— investigations into the circumstances of deaths during the Troubles— as well as civil actions related to the conflict brought against state agencies.

The Secretary did not discuss the possibility of halting ongoing court proceedings in Troubles-related cases, of which there are currently eight.

Despite nearly 4,000 deaths during the Troubles, there have been only nine Troubles-era prosecutions in the past six years, the BBC reported.

Archbishop Martin pointed to an April 2020 statement from the body of Irish bishops, in which they highlighted the importance of victims being given priority “as the focal point of any response to addressing the legacy of the past,” and reiterated support for “the ongoing pursuit of appropriate criminal, legal and civic justice for all victims.”

The archbishop questioned who stands to benefit from the present proposed plan.

“Dealing with the legacy of our shared past is not an easy task. It is a complex undertaking which belongs to all of us. It has no ‘quick-fix’. No ‘line can be drawn’ to relieve the deep hurt still carried in the aftermath of years of violence, death and life-changing injury,” he said.

Lewis said the proposals also include a body to help families recover information on Troubles incidents, and an oral history initiative, the BBC reported.

Irish nationalists were themselves riven by civil war after the treaty and the partitioning, though the 26 counties later became fully independent in the late 1940s as the Republic of Ireland.

In Northern Ireland, differences between nationalists who backed a unified Ireland and unionists who supported the United Kingdom split strongly along religious lines, and Protestants tended to occupy a place of social and economic privilege.

In the 1960s, Catholics began to push for civil rights, voting rights, police reform, and an end to discrimination. Tensions turned violent in 1968, after civil rights demonstrators faced violent opposition from their opponents and police inaction.

The subsequent period known as The Troubles featured riots, violent attacks, bombings and retaliation from Protestant and Catholic paramilitary groups, as well as involvement from the Royal Ulster Constabulary police, intervention from the British military, and mass internment of civilians.

The Good Friday Agreement of April 10, 1998 largely brokered peace on the island, but significant tensions over past crimes remain.

New unrest in Northern Ireland began in late March of this year, taking the form mainly of young people throwing bricks, fireworks, and other projectiles at police.

According to the BBC, that unrest largely erupted as a result of police in March choosing not to prosecute members of the left-leaning Sinn Fein party for violating coronavirus restrictions last year, as well as continued tensions over a new sea border between Northern Ireland and Ireland imposed as a result of Brexit.

In May this year, a new inquiry ruled that a Catholic priest, a mother of eight, and at least seven other civilians were wrongly killed by British soldiers in Northern Ireland in a three-day 1971 incident known as the Ballymurphy Massacre. The official finding places the incident as a possible forerunner to Bloody Sunday, another massacre of Catholic demonstrators by British paratroopers.