New priest blesses his sister, a nun: ‘It’s been a real privilege and a joy’ 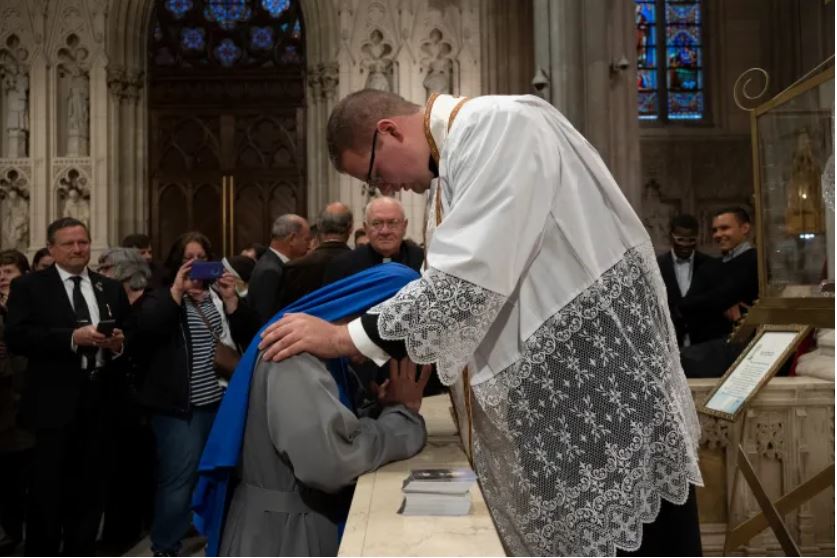 New priest blesses his sister, a nun: ‘It’s been a real privilege and a joy’

It is customary for a newly-ordained priest to impart a first blessing. For Father Matthew Breslin, who was ordained May 29, his first blessing was especially poignant, as he bestowed it on his sister Megan, herself a religious sister.

“It’s been a real privilege and a joy to journey through a vocation with a sibling who is also journeying through a vocation, because you just understand things that others don’t,” the newly-ordained priest from the Hudson Valley region of New York told CNA. He was ordained a priest of the Archdiocese of New York.

“Certain frustrations, certain graces; it was always a treat and a privilege to go through that with her. I could always talk with her about things that I probably could not have if she were not in religious life, and vice versa.”

Breslin and his sister were raised in a strong Catholic household, but also one marked by tragedy.

Breslin’s father, Alex, was diagnosed with terminal brain cancer while his mother was pregnant with Matthew, and Megan was two years old. The prognosis was that Alex would not live to see his son born, but he defied the odds and lived almost ten years, despite losing much of his hearing and eyesight, finally dying when Matthew was nine years old.

“From him, I got an early example of the love of the Father…it was very easy for me to see, through him, the Father’s love, and also that sacrificial nature of love.”

Breslin’s mother, too, modeled a radical self-giving love for her children, he said, caring for her dying husband while also raising two children on her own.

“She was dealt an incredibly hard hand of having to care for a dying husband for ten years,” he noted.

“It was always on display how much she sacrificed for us. She just loved us so much, and that sacrificial love is something that I learned from her, and hope to be as a spiritual father to many.”

The family started attending daily Mass at their local parish, and it was there that Matthew got to know the parish priest, who provided him with a positive example of the priesthood.

In addition to filling a fatherly role for Matthew, he “made the priesthood very desirable, very attractive.” While Matthew had other father figures in his life, he says the holy priest filled a unique role.

“He was a good man who loved his people. And so the priesthood, through him, became very easy for me to be attracted to,” Father Breslin commented.

Although Matthew says he first felt a call to the priesthood around nine years old, in high school he got the impression that wanting to be a priest was not “cool,” and he says he largely lived his faith “only privately” for a time.

In late high school, however, his attractions to the priesthood, which had always been vaguely present, started to roar back, especially after he attended a Catholic summer camp called Camp Veritas, where he did a lot of soul-searching and discernment.

Often, when the possibility of the priesthood entered his mind, he would find himself thinking “I could never be good enough for this.” But he says he felt the Lord’s voice urging him to trust.

Matthew entered college seminary that year, completing his priestly studies at St. Joseph Seminary in Yonkers, New York. His sister had entered a religious community, the Servants of the Lord and the Virgin of Matará, the year before, after discerning her vocation on a 2011 pilgrimage to World Youth Day in Madrid.

Father Breslin said that before he entered seminary, he kept his faith largely to himself, but for the past eight years, he and his sisters’ relationship and their ability to talk about their faith lives has grown stronger.

Though parts of Matthew and Megan’s lives have been marked by suffering, Matthew said he has found that the Lord really is present in suffering, and if we can’t find Him on our own, we need to reach out and ask for help.

“I know the Lord’s hand was constantly present in my father’s life and death. I know that he was guiding my mother, my sister and I throughout all of it, perhaps most especially when we didn’t feel it.”

In his new role as a parochial vicar, Father Breslin said he is particularly excited to celebrate Mass and hear confessions, and also to remain involved in high school youth ministry, since that was so formative for him when he was that age. He has also been assigned as a part-time chaplain for a nearby high school.

In terms of advice for those in the midst of discernment, Father Breslin advised that people can and should pray more for the grace to discern a vocation. If you feel a “tug” toward a vocation, bring that to the Lord, and to a trusted spiritual director, he said.

And if you feel a “tug” to the priesthood or religious life, talk to priests or religious who are living the life you are considering, he said.

“They know the life you’re thinking about. They can give you insights you may not think of, and they can share the hardships with you.”

Many young people today don’t hear a call to the priesthood or religious life, Father Breslin commented, “not that the Lord is calling less, but that we are not hearing the call.”

Young people should strive to be open to the will of the Lord, realizing that anything given to Him will be repaid many times over, Father Breslin said.

“People are commenting on how much I’ve given up [to become a priest], but I can’t focus on what I’ve given up when I’ve received, even in these first five days, so much more,” he said.