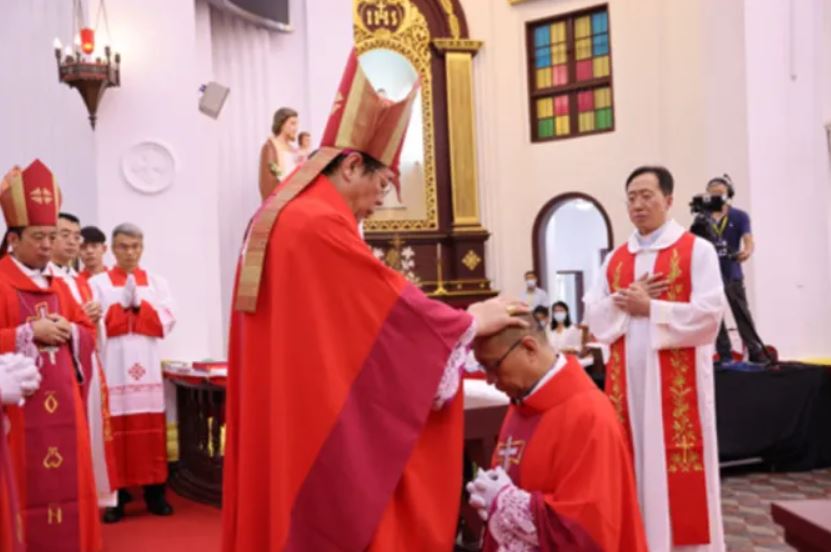 The episcopal ordination of Francis Cui Qingqi in Wuhan, China, on Sept. 8, 2021. / www.chinacatholic.cn.

A new bishop of Wuhan, China, was ordained Wednesday under the terms of the Vatican-China agreement, a Vatican spokesman has confirmed.

Bishop Francis Cui Qingqi, 57, is the sixth bishop to be consecrated in China since the Holy See signed a provisional agreement with the Chinese government in Sept. 2018.

According to Vatican spokesman Matteo Bruni, Pope Francis appointed Cui as the bishop of the Diocese of Hankou/Wuhan on June 23 and his episcopal ordination took place on Sept. 8 in Wuhan, the city where the first COVID-19 cases were reported.

The newly ordained bishop is a Franciscan who is said to be close to the Chinese government.

The Wuhan diocese has been without a bishop for the past 14 years, with Fr. Cui filling the void in an unofficial leadership position since 2012.

After studying in Beijing, Fr. Cui was appointed by provincial authorities of the Chinese Communist Party (CCP) to head a five-member “management committee” to oversee the Wuhan diocese nine years ago, according to a 2012 report in the Italian newspaper La Stampa.

Cui was appointed deputy secretary of the state-sanctioned bishops’ conference in 2016 and became the president of the Catholic Patriotic Association of Hubei in January 2018.

He was born in Shanxi province in 1964, 15 years after the Chinese Communist Revolution, and was ordained a priest in 1991 at the age of 27.

In October 2020, the Vatican and China renewed their provisional agreement on the appointment of bishops for another two years. The terms of the agreement have not been made public.

Bishop Cui is the fourth bishop to be consecrated since the deal’s renewal. In July, the Vatican announced the ordination of Anthony Li Hui as the coadjutor bishop of the Diocese of Pingliang.

Fr. Bernardo Cervellera, the former editor-in-chief of AsiaNews, told CNA in an interview last month: “From what I’ve seen, bishops who have been ordained, nominated, and ordained, they are all president or secretary of the Patriotic Association. So this means that they are very near to the government.”

The Catholic Church is in need of around 40 more bishops in China, according to Cervellera.

The first “patriotic bishop” named without the Vatican’s approval by the communist government in China in 1958 was from Wuhan.

The Diocese of Wuhan itself was created autonomously by communist authorities by merging three historic Catholic dioceses: Hankou, Hanyang, and Wuchang.

Bishop Cui’s episcopal ordination took place in St. Joseph’s Cathedral, originally the seat of the diocese of Hankou, in the city of Wuhan.

The city of 11 million people was once an outpost for Catholic missionaries who founded Catholic hospitals in the city, including what is now called Wuhan Central Hospital, where coronavirus whistleblower Dr. Li Wenliang died.

China’s first canonized saint was martyred by suffocation on a cross in Wuhan. St. Jean-Gabriel Perboyre, a Vincentian missionary priest from France, was betrayed by one of his catechumens for money, bound in chains, tortured, tied to a wooden cross, and strangled to death in 1840.

St. Thérèse of Lisieux had a special devotion to Perboyre and kept a holy card dedicated to him in her personal prayer book. Perboyre was beatified in 1889 by Pope Leo XIII and canonized by St. John Paul II in 1996.

“I don’t know what awaits me on the path that opens before me: without a doubt the cross, which is the daily bread of the missionary,” the saint wrote in a letter during his journey to Wuhan.

“What can we hope for better, going to preach a crucified God?”