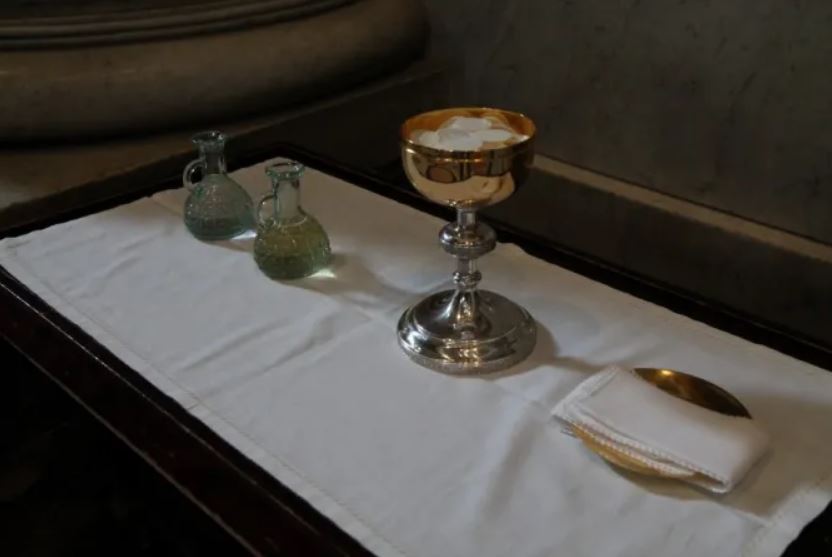 A community of Benedictine nuns known for inventing and distributing low-gluten Communion hosts has seen their business decimated by the pandemic, as the widespread suspension of public Masses last year led to a drop in demand for hosts nationwide.

The Benedictine Sisters of Perpetual Adoration in Clyde, Missouri have produced Communion hosts – also called “altar breads” – since the early 20th century, as a means of sustaining their community.

Sister Ruth Starman, OSB, head of the abbey’s altar bread department, told CNA that their altar bread sales dropped significantly when the pandemic swept through the United States in the spring of 2020. Compared to a normal pre-pandemic year, the abbey’s business in 2020 dropped by about 75%.

“Our sales basically went down to zero for a couple of months,” she said. “The sales for our presider breads remained somewhat steady; they did drop somewhat, but with only priests saying Mass, we were only able to sell some of those presider hosts,” she said.

Sister Ruth said the massive drop in demand led the abbey to lay off 13 people in the altar bread production department – mostly lay employees from the local community – last September.

“That’s really a lot of people not able to go to Mass and receive the sacraments, which is really the important thing; our sales don’t really matter,” she said.

“But it’s an indication of people not being able to partake in the sacraments.”

Last fall, the sisters’ business began to increase as parishes reopened. Over the last few months, Sister Ruth said, orders for altar bread have increased as dioceses across the country are reinstating the Sunday Mass obligation.

Yet Sister Ruth said she would be surprised if their sales of altar bread ever reached pre-pandemic levels again. Some people might not return to Mass after the pandemic, and the pandemic could have accelerated the ongoing consolidation or closure of many parishes across the country.

As recently as the 1960s, hundreds of religious orders nationwide were producing hosts as a means of supporting themselves. The sisters in Clyde were already running a school and a print shop when they branched off into altar bread production in 1910.

“We were the largest religious producer of altar breads in the U.S.,” Sister Ruth said, noting that in the late 1990s and early 2000s, the community was producing as many as 8 million hosts a month.

“It fits so well with our charism of adoration, that it really was a very difficult decision [to shut down production],” she said.

The sisters also developed the recipe for the Catholic Church’s first low-gluten hosts – a product they still produce and sell to this day.

There is a common misconception that priests and Catholics with an intolerance to gluten can use “gluten free” hosts, while in reality the Vatican has, since 1995, mandated that Communion hosts must contain at least some gluten.

As wheat bread is the matter of the sacrament, the Vatican stated in 2003 that low-gluten hosts are acceptable so long as “they contain a sufficient amount of gluten to obtain the confection of bread without the addition of foreign materials and without the use of procedures that would alter the nature of bread.”

The typical recipe for a Communion host includes only wheat flour and water. The wheat used in low-gluten hosts has had the gluten – which holds the bread together – removed by a process of milling. As a result, the sisters’ first attempts at creating a low-gluten host were extremely difficult, and the hosts were too hard to actually eat.

It took over ten years of experimentation for the sisters to develop the right recipe. Sister Lynn D’Souza joined the effort in 1999, and put her degree in biochemistry to good use.

Finally, the process benefitted from the help of the Holy Spirit.

“We were done with an experiment for the day, and kind of had a little batter left on the spoon, so we flicked it onto the waffle iron, and forgot about it and went and washed dishes,” Sister Jane Heshmeyer, who works in the altar bread department, recalled.

“We opened [the waffle iron] up and there was a lacy looking edible thing. So we ate it right away and forgot how we got there, but the Holy Spirit helped us get back to that.”

The sisters had the hosts tested in a lab for their gluten content, and also asked several volunteers with celiac disease to eat the hosts and report any adverse effects. The scientists found that the hosts contained just .001% gluten, low enough to be safe for most celiacs.

The Vatican approved the sisters’ low-gluten bread for Communion in 2003. Before the pandemic, the sisters produced about 82,000 individual low-gluten hosts per month, on average.

Sister Ruth said the current demand for low-gluten hosts is about two-thirds of normal – higher than the demand for the sisters’ altar bread overall. Today, sisters from the abbey make up the entire staff producing the low-gluten hosts.

Before the pandemic, Cavanagh Altar Breads – a large secular corporation headquartered in Rhode Island, had steadily consumed the lion’s share of the market for Catholic Communion hosts.

In addition to having a far greater production capacity than any one religious order, their hosts are different from the ones made by hand; the wafers have a sealed edge, which some priests prefer because they are less likely to produce crumbs.

Due to the large drop in their capacity for in-house production, Sister Ruth said the sisters have begun receiving shipments of altar breads from Cavanaugh once a week, which they then repackage and resell.

Despite the hit to the abbey’s income, Sister Ruth said the abbey remains financially sound thanks to donors, as well as to the sisters’ secondary business of selling homemade lotion, candles, and soap.

“There’s been a drop in demand for altar breads over the years,” she said, adding that she hopes people start returning to Mass to receive the sacraments, because “it’s just not the same watching on TV.”