On the International Day of the Girl Child, Church in Pakistan Decries Rejection of Bill Against ‘Conversion and Forced Marriage’ of Underaged Girls 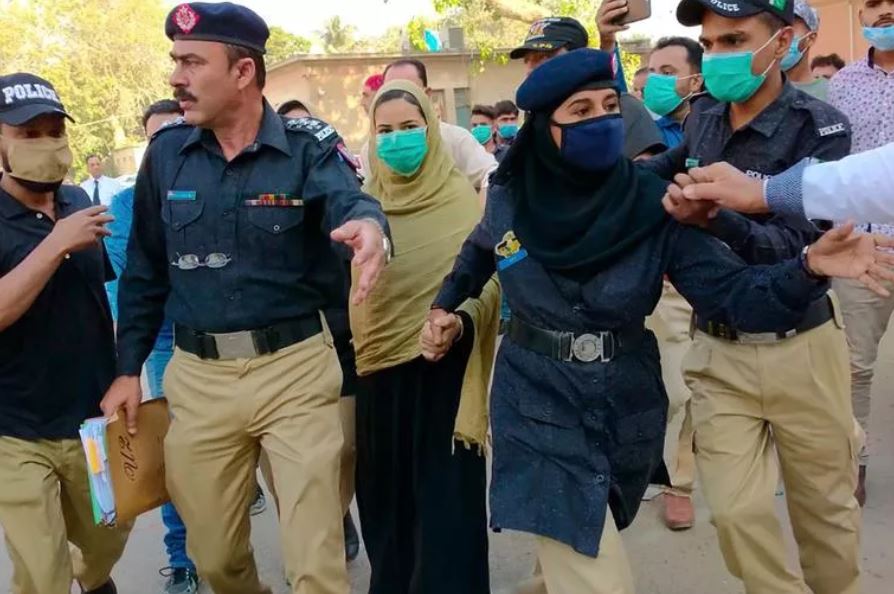 On the International Day of the Girl Child, Church in Pakistan Decries Rejection of Bill Against ‘Conversion and Forced Marriage’ of Underaged Girls

Abduction and forced marriage of Christian and other minority girls is a widespread occurrence in Pakistan.
Anto Akkara, October 11, 2021

The National Commission for Justice and Peace (NCJP) of Pakistan has spoken out on Oct. 11 — the International Day of the Girl Child — against their national government, for the dropping of a bill to curb abduction and forced marriages of Christian and other minority girls among the minority communities in the Muslim majority nation.

According Oct. 11 NCJP press statement, “His Excellency Bishop Samson Shukardin said that rejection of the bill is against the right to religious freedom. It would encourage the criminals to use religion as a cover for the crime of abduction, rape and conversion of minority girls to Islam with impunity.”

Bishop Shukardin, who heads the Diocese of Hyderabad, is the commission’s chairman. It is the human rights body of the Pakistan Catholic Bishop’s Conference.

“The bill against Forced Conversion should be the law of the land,” stated the NJCP press release.

The shelved bill, the statement pointed out, was drafted by the Federal Ministry of Human Rights on the recommendations of a special parliamentary committee formed by Pakistan’s prime minister himself in 2019, and a committee was formed to address the issue of forced conversions in the country.

“The Ministry of Religious Affairs and Council of Islamic Ideology should reconsider their stance over the issue of forced conversion of the girls of religious minorities,” the NJCP press release stated. “They persuaded the Federal government to take a logical and legal stance in accordance with its international obligations and constitutional provisions for the protection of the rights of minorities.”

In ordering a freeze on the much-debated bill on Sept. 29, Prime Minister Imran Khan on Sept. 29 surprised his nation and observers elsewhere by reportedly declaring that there would be no new laws enacted that went against Islamic precepts during his time in office.

The prime minister, who was elected in August 2018, said that contentious government bills — including one apparently addressing the issue of domestic violence as well as the one drafted to check forced conversions — will not be enacted as they have provisions which are “in direct conflict with the teachings of Islam,” The International News of Pakistan reported.

Khan who heads a coalition government supported by Islamist parties, made the pledge during his meeting with Islamic scholars who have vehemently opposed the 2021 Prohibition of Forced Conversion Bill.

Khan also blamed “some non-governmental organizations” that he said were seeking to have such laws and policies legislated, in order to promote westernization and undermine Pakistan’s family system and its socio-religious values.

Rejecting this claim, the National Commission for Justice and Peace said in its Oct. 11 statement that the anti-conversion initiative was “a logical and legal stance in accordance with [Pakistan’s] international obligations and constitutional provisions for the protection of the rights of minorities.”

And it was particularly warranted in the context of the abduction of minor girls from their families for forced marriages and conversions to Islam.

“The victim child faces extreme agony of fear, separation from parents and physical, mental and emotional exploitation,” the NCJP stated. “Parents of the victim child are threatened to keep silent. In fact, the crime of forced conversion involves multiple violations of human rights including freedom of religion and fundamental human rights.”

In support of that assessment, the commission cited Article 20 of the Constitution of Pakistan and Article 18 of the Universal Declaration of Human Rights, which guarantees freedom of religion to every citizen.

Additionally, two other foundational U.N. Human Rights documents, the International Covenant on Civil and Political Rights and the Convention on the Rights of Child, assign parents the right of choice of the religion of their children till the age of 18. Pakistan has ratified both of these documents.

Describing the proposed bill as “a loyal effort to address the issue of forced conversion of women and children of religious minorities,” the Catholic commission urged the government not to “allow some quarters to sabotage a positive move that would ensure the protection of religious minorities in the country, that is legal and per the constitution of Pakistan and international laws.”

In fact, the commission has extensively documented and analyzed the injuries caused played by rampant forced conversions and marriage of underaged girl, in a study titled “Ordained Transgressions: Misery of Minority Girs and Women.”

“According to the data quoted by volunteer groups, on average 1,000 cases of forced marriages and conversions occur every year,” the study noted.

Naeem Yousaf Gill, the Justice and Peace Commission director, told the Register that the dossier brought out in March has been submitted to parliamentarians, government ministers and to civil society groups.

“We hope the facts brought into light may facilitate lawmakers and policymakers to apprehend the grave situation of religious freedom in Pakistan,” Gill said.

The exact number of forced conversions and forced marriages in Pakistan, Gill pointed out, is “very difficult to gather” as “the majority of cases are not reported as most of the victims are poor and vulnerable.”

Michelle Chaudhry, a Catholic social activist, told the Register that she was “disappointed and very upset by the rejection of the bill which, if passed, would have criminalized forcible conversion of underage non-Muslim girls in Pakistan.”

“Girls belonging to religious minority communities, Hindu and Christians in particular, are kidnapped and forcefully converted to Islam. They are then forcibly married off to their abductors who rape and often prostitute them. All this is being carried out in an environment of impunity,” she said.

“There are no two ways about the need for effective legislation against the forced conversion of underage non-Muslim girls. The state must realize that, while also upholding its international obligations, it must implement the guarantees enshrined within the constitution of Pakistan,” reiterated Chaudhry, president of The Cecil & Iris Chaudhry Foundation.

Meanwhile the Alliance Defending Freedom (ADF) has launched a special campaign to draw international attention to the plight of girls in Pakistan, to mark the International Day of the Girl Child on Oct. 11.

“We have launched the EndForcedMarriage campaign to apply maximum international pressure to the Pakistani authorities, and to let these girls know that someone hears their voice,” said Tehmina Arora, director of advocacy Asia for ADF International, told the Register.

The social media campaign includes the chilling testimony of Maira (a 14-year-old girl kidnapped, converted, married and later rescued), along with a link to the online petition to Prime Minister Imran Khan with several suggestions to ensure the protection of at-risk girls from religious minorities.

“Nobody should be persecuted because of their faith. The case of Maira is just one shocking example of what is happening across several countries in South Asia and across the world,” Arora said. “We call on supporters to add their voice to this campaign.”