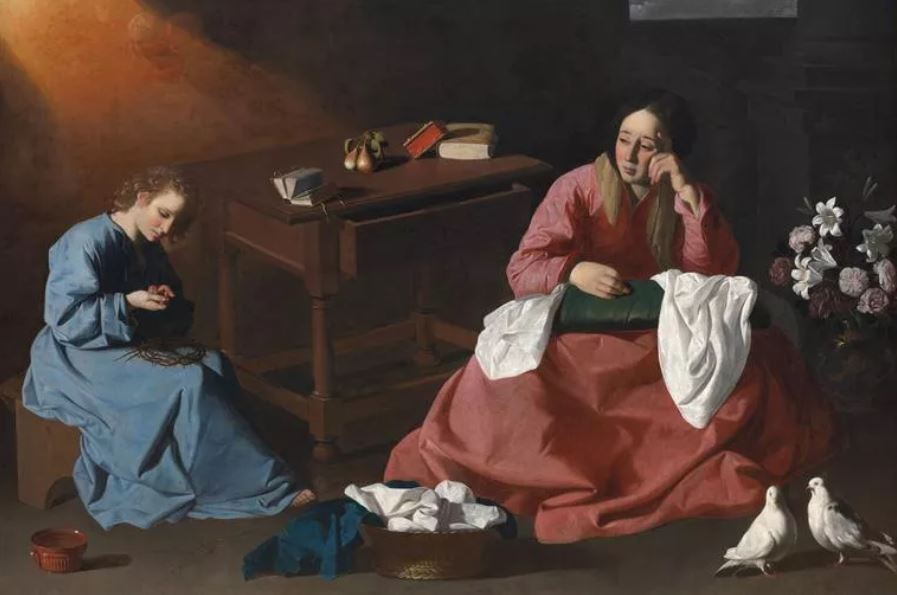 This week, we are especially reminded that the Maker of the universe “became his own making” — and that Christ and his saints were born in order to die.

December will soon be gone, giving way to a new and uncertain year — leaving in its wake, however, the wonder of a God who, without loss of divinity, dared to become a helpless child buffeted about by a world hostile to his coming.

So why then did he come? It was surely not for his own pleasure, as if he needed a holiday from Heaven, and planet Earth seemed the perfect vacation package. He came rather out of an incomprehensible depth of mercy and love to redeem a fallen world. It is the one motive that could possibly possess a Being of infinite perfection to lay aside his eternal majesty and thus take on the misery of a lost race. Because he wished to lead us all safely home.

Here is the supreme paradox of our faith, stunningly expressed in lines of the greatest Catholic poetry. Richard Crawshaw, for example, that superb artist of the Baroque, for whom there could be no greater marvel than the miracle of Christmas Day.

“O Great Little One!” he exclaims. “Whose all-embracing birth / Lifts Earth to Heaven, stoops Heaven to Earth.” Or, again, “That Glory’s self should serve our Griefs and fears: / And free Eternity submit to years.”

Closer to our own age, there is Gerard Manley Hopkins, for whom the same paradox is struck, only this time from the side of the Child’s mother, “who gave God’s infinity / Dwindled to infancy / Welcome in womb and breast / Birth and the rest.”

How could anyone, reading lines like these, not feel some tremor of astonishment that the Maker of the universe would actually consent, as Dante has put it, “to become his own making?” That the Word spoken from all eternity would not only enter time but, for a time, be unable to speak a word in time? That God would freely submit himself to a simple Jewish girl, who then teaches him how to speak and to read? How are we to take that in? The same God who cobbled a universe into place not knowing, on coming into that world, a thing about carpentry!

Is it any wonder that Joseph and Mary should be regarded as indispensable to the life of Christ, to God in his very humanity?

But it is not only the Nativity narrative that arrests the attention. No less stupefying during these late December days are other examples of the irony of God. No sooner have we dug ourselves out from under the avalanche of gifts and toys, the happy detritus of the holiday, and there we are, staring straight into the grave of poor Stephen, the very first martyr of the Church. How quickly we have come from Crib to Cross! In that one shattering moment we go from the quaintness of a stable to the grotesquerie of a stoning. Then, in another sudden and violent jerk, we are witness to the slaughter of the Holy Innocents, their pitiful cries silenced by the hatred of Herod, determined on the destruction of the Infant for whom they have shed their blood. And then, as if there were not already enough blood, the very next day we observe the butchery of Archbishop Becket at the altar of his own cathedral.

By week’s end, of course, Jesus will himself shed blood, the Feast of Circumcision being but a foretaste of a far bloodier Passion to follow. The Church is certainly a wise mother, but in caring for her children she will not tell them lies. No sooner, therefore, have the “tissued fripperies,” to borrow a line from the poet John Betjeman — “The sweet and silly Christmas things, / Bath salts and inexpensive scent / And hideous tie so kindly meant” — been put away and forgotten, than she lets us know straightaway that our lives are hedged about by death. That the little child we see in Bethlehem’s crib has come to die on Calvary’s hill. The saints know this, of course, but we, cosseted in cheap holiday cheer, pay no attention.

How cleverly God has arranged the Christmas season to set us straight! In a Christmas sermon preached in the last week of his life, St. Thomas Beckett, England’s Archbishop, reminds us of the irony of a God who, in bringing us together for Mass, even on the morning of his Son’s birth, does so in order to re-enact the Passion and Death for which he came in the first place. “So that at the same moment we rejoice in his coming for the salvation of men, we offer again to God his Body and Blood in sacrifice, oblation and satisfaction for the sins of the whole world.”

Are not such things passing strange, he asks, in a world where reality is so often reduced to the things we see? “For who in the world will both mourn and rejoice at once and for the same reason? For either joy will be overborne by mourning, or mourning will be cast out by joy; so it is only in these our Christian mysteries that we can rejoice and mourn at once and for the same reason.”

It is no accident, in other words, that Christ is born only in order to die and that Stephen and the others should thus strive to live — and die — in perfect conformity to the pattern he set. It is fitting, therefore, that we should rejoice and mourn for both since the witness of those who follow Christ anneals them especially to Christ. “We mourn,” says Beckett, “for the sins of the world that have martyred him; we rejoice that another soul is numbered among the saints in Heaven, for the glory of God and the salvation of men.”

Here, then, is the final point. That the shedding of blood for God is always and everywhere a work of God. For the genuine martyr, as Canterbury’s Archbishop concludes just moments before the point is sealed in his own blood, “is he who has become the instrument of God, who has lost his will in the will of God, not lost it but found it, for he has found freedom in submission to God. The martyr no longer desires anything for himself, not even the glory of martyrdom.”

A lesson that Beckett himself must learn at the last when, for a time that proves nearly fatal, he flirts dangerously with the thought of self-sought glory. “The last temptation,” the martyred saint tells us in T.S. Eliot’s masterful retelling of the tale in Murder in the Cathedral, “is the greatest treason: To do the right thing for the wrong reason.”

Motive and act must in the end be made one. For all of us, that is. Saint and sinner alike.