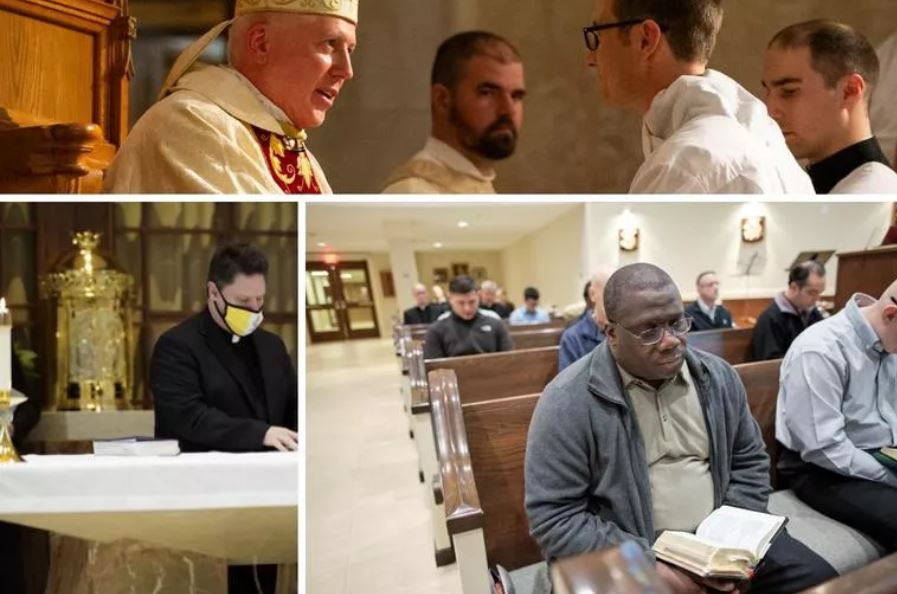 Older men continue to answer ‘Yes’ to the call.

This year, the Catholic Church will receive a fresh crop of priests in the United States — and it’s a bumper crop.

The 2021 report on ordinations by the Center for Applied Research in the Apostolate (CARA) at Georgetown University, in collaboration with the U.S. Conference of Catholic Bishops’ Secretariat of Clergy, Consecrated Life and Vocations, identified 472 transitional deacons to be ordained Catholic priests this year — an increase of 24 new priests compared to last year’s ordination class. The annual report also noted that, of the 346 ordinands who replied to an email questionnaire, 75% will be ordained for the diocesan priesthood (compared to 82% last year), while 24% will be ordained for a religious order (compared to 18% last year).

But if the quantity of new priests to be ordained is a sign of hope for the Church, the quality of these new priests underscores that hope by reflecting a strong brotherhood unified in virtue and the desire to undertake the Church’s mission through teaching, sanctifying and providing pastoral care for those they will be serving in the months and years to come.

At Mount St. Mary’s Seminary and School of Theology in Cincinnati, members of the seminary’s Class of 2021 will be ordained for several dioceses around the country, including the Archdiocese of Cincinnati, two for the Oratory of St. Philip Neri in Cincinnati, and the Dioceses of Fort Wayne-South Bend, Indiana; Kansas City, Missouri; and Toledo, Ohio.

According to Father Ryan Ruiz, dean of the School of Theology for the seminary, the size of this year’s class comes with its own blessing.

“Twelve men will be ordained priests from Mount St. Mary’s Seminary this year, giving us a nice scriptural number of which to boast,” he told the Register.

The class as a whole, Father Ruiz said, stands out in their witness and service to one another and in their willingness to carry these habits with them into the priesthood.

“One aspect that has shaped their overall approach to priestly formation is their understanding of the importance of selflessness in the world today,” he said, pointing out that three of the seminarians to be ordained are converts to the faith, and two of these converts are brothers “who helped each other into the Church and then into the seminary.”

As director of liturgy at the seminary, Father Ruiz told the Register that he was especially pleased by the class’s firm grasp of the liturgy.

“The men in this year’s cohort — perhaps more so than any other cohort I have encountered up to this point in my work in seminary formation — are strongly liturgical,” he said. “They have exhibited an impressive facility not only with the praxis of liturgical celebration, but also with the deep theological and spiritual insights to be drawn from the Church’s multiform rites.”

The dozen graduating from Mount St. Mary’s, Father Ruiz told the Register, have been profoundly transformed by their seminary education — and will be further transformed by the graces they receive at ordination.

“Cynics might scoff and say that this selflessness is merely the manifestation of the exuberance of youth or idealistic naiveté,” he said. “However, to know these men is to know that this is something much more deeply rooted in them than a mere passing thought and that it will, in fact, have a major effect in the lives of the people whom they will serve as priests.”

Indeed, this same enthusiasm for the priesthood can also be found among older men who received the call to the priesthood, such as the 18 seminarians to be ordained priests this year who have been studying at Pope St. John XXIII Seminary in Weston, Massachusetts. The seminary was founded in 1964 to form seminarians who have discerned a possible vocation later in life.

At age 52, Deacon Michael Lombardi has already had what many might consider a full life, building up over a 16-year period a career as an architect, starting at a firm in Seattle before eventually opening his own firm in the city. But when he realized that all the success in the world meant nothing without God, he turned back to the faith of his childhood.

“I started going back to church slowly and back to confession and gradually every week I would be attending Mass again,” he said. “I also learned more about my faith, and that was the main key.”

Eventually as his faith grew stronger and deeper, he began to discern a vocation and returned home to Long Island, New York, to visit the Diocese of Rockville Centre’s vocation director.

“It was a call that was long and slow in coming,” the deacon said, “and in my discerning it did not happen suddenly.”

Deacon Lombardi will be ordained to the priesthood with two other deacons on June 19 at the Cathedral of St. Agnes in Rockville Centre by Bishop John Barres.

In the days leading up to his ordination, Deacon Lombardi said that time in front of the Blessed Sacrament is an essential component of his preparation.

“Thoughts can churn in your head — ‘Where am I going to go? Where am I going to be assigned, once I’m a priest?’” he said. “There are so many things to think about, it makes you crazy. But the Blessed Sacrament helps me slow down, spend time with the Lord, learn to be quiet and listen to what he wants me to do.”

Deacon Guy Dormevil is also finishing up studies at St. John XIII Seminary and, like his classmate, Deacon Lombardi, he also already had a full life before discerning a vocation. He will be ordained a priest for the Diocese of Bridgeport, Connecticut, on June 12 at the Cathedral of St. Augustine by Bishop Frank Caggiano.

While every vocation story is unique, Deacon Dormevil’s is also a testament to the good that God can bring out of sorrow and suffering. Deacon Dormevil, born and raised in Haiti, married his wife, Magalie, with whom he had two children, and worked as an immigration officer in Haiti. He and his family moved to the United States in 1988, and for 26 years he worked as a produce manager at a grocery store. But when Magalie, stricken with cancer, died in 2015, the deacon realized that God was calling him to a new kind of fatherhood.

Along with his seminary formation, Deacon Dormevil brings many of the lessons he learned as a father to his priesthood.

“Being a father is about love, giving and caring,” he said. “If you don’t care for your family, how can you do anything for other people? My family was No. 1 for me, and I did everything for my family. Now the Lord is calling me to carry the torch from my family and bring it to the Church.”

Deacon Dormevil’s own father, who died 39 years ago, also had a role to play in his vocation. The oldest male of 16 children, Deacon Dormevil knew that his father prayed constantly that some of his children would discern religious vocations.

Like Deacon Dormevil, Deacon Joseph Mominee also appreciates the importance of family — not only as the primary source for vocations but also as a mainstay of support. Finishing up studies at The Pontifical North American College in Rome, Deacon Mominee will be ordained on June 26 at Our Lady, Queen of the Most Holy Rosary Cathedral in Toledo, Ohio, by Bishop Daniel Thomas.

As he looks forward to ordination day, Deacon Mominee is grateful that his parents, Jay and Mary Mominee, have provided a strong Catholic family life as an early catalyst for his vocation.

“During these last eight years of seminary formation,” he said, “my mom and dad have been an inspiration for me in their witness to loving God and the Church, and in their prayerful, loving and generous support of my discernment.”

This same support, sewn into the fabric of Deacon Mominee’s formation, will also be on display at his Mass of thanksgiving at the church of his home parish, Our Lady of Lourdes Church in Genoa, Ohio.

Deacon Mominee looks forward to celebrating in his home parish, not only as a way to thank those who have supported him throughout his seminary years, but also to receive a new set of vestments, including a chasuble, stole, chalice veil and two dalmatics — all hand-sewn by his mother with help from his aunt and some parishioners and friends.

“A few months ago, I was talking to my mom about purchasing vestments, and I asked her if she would ever have any interest in making some,” he said. “It stands as a great testament to my mom’s personality that she not only liked the idea of making a set of vestments, but that she wanted to learn how to ASAP before my ordination.”

As a new priest, Deacon Mominee hopes to live out his vocation as witness to God’s love for his Church.

“Above all, this witness will come about in simply offering myself to the disposal and dispensation of God’s grace in the celebration of Mass and in the other sacraments,” he said. “And flowing from these encounters with God’s grace, I am looking forward to the daily life of a diocesan priest, from the most ordinary to the most extraordinary moments of priestly life in serving the Lord’s Church.”

“Relocatiō”: Why These Families Mo...