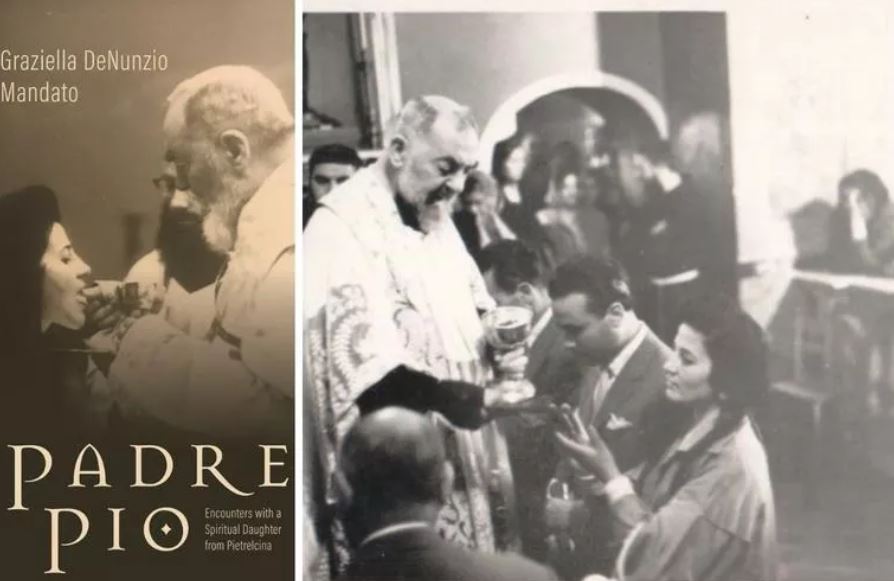 Padre Pio: Encounters with a Spiritual Daughter from Pietrelcina

Padre Pio is a saint whose life always captivates us, brings us great spiritual insights, and motivates us to do grow spiritually.

Padre Pio: Encounters with a Spiritual Daughter from Pietrelcina does no less, presenting a personal look at Padre Pio through the eyes and experiences of author Graziella DeNunzio Mandato, one of his beloved spiritual daughters. Mandato, who died in 2014, wrote the first edition some years ago. This second edition, published by popular request, is not simply a reprint — it includes engrossing additions by her eldest son, Capuchin Father Pio Mandato.

The new edition brings readers closer to the holy witness of St. Pio.

Having met Padre Pio as a young child and become his spiritual daughter when she was a young teen, the author recounts many wonderful experiences she and her family, who lived in Pietrelcina, had with Padre Pio. Those experiences continued “long distance” after she married, immigrated to the United States and raised a family.

What makes this book exceptionally interesting is that the author shares wonderful stories and memoires as if she’s sitting with readers at her table over a cup of coffee or expresso. It is edifying to learn about her interactions with Padre Pio, as well as so many other people’s experiences, too, whether those of family members or residents of Pietrelcina who went to visit and confess to him at San Giovanni Rotondo. Included are many instances of his appearing to Mandato in her dreams and what each one ultimately meant for her.

Each story takes a brief chapter, and every incident or story Mandato shares has not only a homey touch but a wonderful bit of insight. Readers will marvel at the incidents that took place. For instance, as native townspeople in Pietrelcina, Mandato’s family members were friendly with Padre Pio’s brother, Michele Forgione, who visited often. One of stories he told recalled how, when Padre Pio — then known by his birth name, Francesco Forgione — was only 10 years old, he went into church and saw a “mother crying and praying out loud to God. It seems her child was very ill, and Francesco began to pray for the child. It was understood by all that the child recovered.”

Year later, Padre Pio came to Mandato’s “mother in a dream and asked, ‘Maria, after the Rosary, why don’t you recite the Hail, Holy Queen?’ My mother responded, ‘I don’t remember it.’” He told her, “‘Well, I’ll recite it, and you say it after me.’ When she awoke in the morning, she knew the prayer by heart.” Mandato recalled, “The Padre would frequently say, ‘Our Lady wishes to be served by praying the Blessed Rosary in order to give us graces and blessings.’”

The author also shares absorbing stories of Padre Pio’s ability to prophecy. In one instance, a family friend from Pietrelcina visited Padre Pio, who told the man his wife was pregnant — something he did not yet know — and “asked, ‘Do you like my name?’ ‘Yes, he answered. ‘Then give him my name,’ since he already knew it was a boy. Years later the friend brought his son to see Padre Pio, who said, ‘This boy will one day be mayor of Pietrelcina.’ His prophecy was fulfilled when the boy became mayor in 1986 to 1997.” Later, the same friend went to ask Padre Pio to bless his wife’s new pregnancy. Padre Pio told him they would be twins — two girls — and both would become religious sisters. “That prophecy came to be fulfilled too.”

Padre Pio’s advice to Mandato’s family was also correct. She recalls how, in 1949, he saved their lives. Once, when visiting St. Pio in San Giovanni Rotondo, her mother informed Padre Pio they would be leaving on a trip the next day. “He told her, ‘No, tomorrow you must not leave.’ My mother said, ‘Very well then, we shall stay longer.’ We always listened to the Padre.”

“The following day we heard that the train we were scheduled to take from Foggia to Benevento had collided with another train with terrible consequences,” the author recalled. “We wondered what might have happened to us if we had taken that train as originally planned. Our dear Padre had advised us before the incident. With tears in her eyes, my mother went back to thank him.’

The remembrances run the gamut, including the humorous and touching. Through every story and personal experience the author shares, Padre Pio’s personality, from the serious to the lighthearted, from the mystical to his charitable love for everyone, shines through. Those experience did not stop even when the family moved to the United States in 1964. As she wrote, “Whenever I have invoked his protection, I have felt him near, especially in moments of need.” She always had strong senses of his nearness and relates many incidents of the guidance and blessings she always received from the saint she affectionately called “Mio Padruccio, my little father!”

The author and her husband did return to Italy over the years, including for the first Mass of their son Father Pio Mandato in the family’s hometown of Pietrelcina — at the same altar where Padre Pio celebrated his first Mass.

Readers will appreciate learning how Padre Pio continued to be an influential spiritual father to his spiritual daughter even after he died. Several pages of family photos help to make the whole blessed story come alive.

This second edition stands out for two more reasons. First, the reissue includes a beautiful preface in the same tone as the reminiscences; second, in an appendix, Father Mandato shares wonderful insights about how Padre Pio helped people with his exceptional spiritual gifts, especially though his ability to read hearts and direct people in the path of God. This section also presents 12 essential elements of Padre Pio’s spiritual principles — what he taught everyone and still teaches them. All 12 appear in Padre Pio’s own words from his writings, followed by Father Mandato highlighting, in a nutshell, how the faithful can apply these holy principles, including how to properly attend the Holy Mass. Such a spiritual fortune!

Not only are the personal stories enlightening, but Padre Pio’s counsels that are included show how this great saint unceasingly aids his spiritual children from heaven.

“An essential step in order to grow in sanctity is to be liberated from anxiety and agitation, for they are plagues to the soul.”

“Walk on the stormy sea amid the strong wind and waves, but with Jesus. What is there to fear? If fear does take hold, with St. Peter loudly call out, ‘Jesus save me,’ and he will extend his hand. Hold tightly and walk with joy.”

Padre Pio, pray for us!