Pentecost and the Blessed Virgin Mary, Mother of the Church 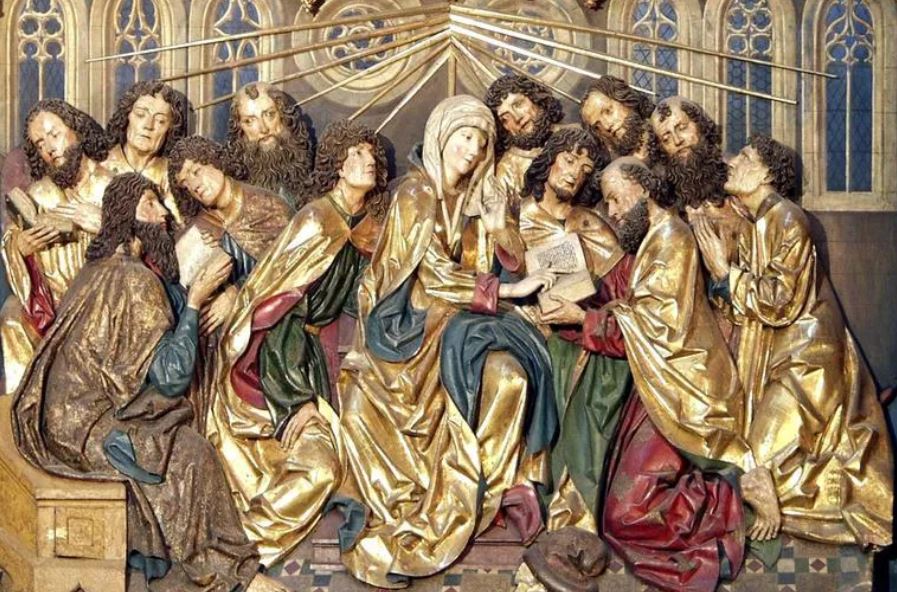 Pentecost and the Blessed Virgin Mary, Mother of the Church

SCRIPTURES & ART: Without Pentecost, the Church would not exist, because the only reason the Church is the Church is because she is alive with the Spirit of Christ.

Without Easter, people should all pack up and go home, because “your faith is in vain; you are still in your sins” (1 Corinthians 15:12-18). Without Christmas, there would be no Easter, for in order to die and rise for us, the Word first had to be “made flesh and dwell among us” (John 1:14).

Finally, without Pentecost, the Church would not exist, because the only reason the Church is the Church and not some nice do-gooder social club that sometimes serves donuts on Sundays is because she is alive with the Spirit of Christ, without whom no one can confess him (1 Corinthians 12:3).

Commenting on the readings of Pentecost can be tricky business because, like its sister solemnities, there are separate readings for the Vigil Mass and Mass during the Day. Furthermore, unlike Christmas but like Easter, the Vigil of Pentecost can have multiple readings (although only one Gospel). The Mass for the Vigil of Pentecost can resemble a “typical Saturday evening” Mass with First and Second Readings and a Gospel, or it can be expanded (something I strongly encourage) to four Old Testament readings, one New Testament epistle, and one Gospel. Of course, like the Ascension, the principal account of what happened on that 50th day of Easter is found not in the Gospels but in the Acts of the Apostles (2:1-11).

Many artists have sought to capture this foundational event in salvation history and ecclesial life. Jean Restout, El Grecoand Giotto are among the most famous. My reflections today will be on two perhaps not so well known: a late Gothic altarpiece by Wit Stwosz and a totally contemporary painting by Jen Nelson.

Wit Stwosz’s “Pentecost” is one of six wooden carvings (three on each side) on the wings of the triptych altarpiece in St. Mary’s Church (Kosciół Mariacki) on the central square (Rynek) in Kraków, Poland. The central pane, over which those wings close, depicts the Dormition of Mary. The unifying theme of the two wings are the six “Joys of Mary.” The other depictions include the Annunciation, the Nativity, the Coming of the Wise Men, the Resurrection and the Ascension.

The figures are carved from linden wood. (The overall construction is made of oak, with backgrounds of larch). Wit Stwosz is careful to maintain the identity of the figures across all seven depictions. They (especially Mary) are frequently clothed in gold, signifying their heavenly and mystical significance. As one commentator also notes, the Apostles are depicted in a blend of the eternal and the temporal: sometimes in the gold of heaven, sometimes in the dress of a 15th-century Cracovian city-dweller.

Mary’s central role in her Son’s life is made clear in this altarpiece: while all the “joys” are Christologically significant (his Incarnation at conception and birth, the confession of his identity, his rising and ascending into heaven, his gift of his Spirit) Mary is always part of them. The six “Joys” Wit Stwosz depicts are thus not exclusively Marian but first and foremost Christ’s, yet Mother and Son cannot be separated. Even the central altarpiece, Mary’s Dormition, which at one time might have been presented as the “privilege” of Mary, conceived without sin, is possible only because it is the “second fruits” of her Son Jesus, the “first fruits” (1 Corinthians 15: 20-23), the “Resurrection and the Life” (John 11:25).

I make this point because there has been a flawed tendency in some strains of contemporary theology to downplay or minimize Mariology. As I argue, however, the selection of “joys” Wit Stwosz depicts is not just “random” Marian moments to match the patronal identification of the church where the altar stands, but has a profound Christological nexus: these “joys” are also central Christian mysteries.

I note Mary’s presence at Pentecost because, as some art historians argue, the Blessed Virgin was left out of depictions of Pentecost in favor of just the Apostles (usually Twelve, in keeping with Acts 1:12-26, in which the selection of Matthias to replace Judas takes place after the Ascension). Luke notes that, upon their return to Jerusalem after Christ’s Ascension, “they were joined together constantly in prayer, along with the women and Mary, the mother of Jesus …” (Acts 1:14, which argues for her inclusion among the “they” (2:1) who were “gathered together in one place” on Pentecost).

Indeed, as is common in medieval art, Mary is at the center of the Pentecost assembly, with all the Apostles — and not just John — treating her as their Mother (see John 19:27). They all sit close together, as a family (which is what the Church is). The Blessed Virgin is shown a book — presumably the Bible — at the moment of the Spirit’s descent, indicating his role in “guiding them to all truth” (John 16:12-15). The Spirit’s role is to “testify” to Jesus (John 15:26), a role that will also devolve upon his disciples (v. 27).

The Spirit himself is not depicted by either the traditional iconographic dove or the “tongues of fire” Acts (1:3) specifies. We merely see lines extending from a central point over the heads of all the participants, suggesting those tongues of fire that “separated and came to rest on each of them” (v. 3). In contrast to the description in Acts of the Spirit’s sudden arrival as “a violent wind … that filled the whole house” (v. 2), those inside this scene seem rather calm about it. Perhaps they have finally taken to heart the Lord’s advice about not being afraid (with a booster shot of fortitude from the Spirit), but one might have hoped for a little more dynamism at this moment.

That’s why I picked my second work of art, a contemporary painting by a living U.S. artist, Jen Nelson (see below). Her very colorful but palette balanced work is permeated with dynamism.

For one, the Spirit who comes in “tongues” does not appear as one great ball of fire in one spot but in fact fills the whole space. Nelson’s Spirit does not just appear over each person’s head. He surrounds, encompasses, encircles, and embraces each person and the whole scene, an effect reinforced by the downward paint strokes of their garments. The Pentecost assembly is not just “enlightened” by the Spirit — they are in the middle of a spiritual conflagration that touches and encompasses their whole being.

Pentecost — one of the places in which the Church sees the basis of the sacrament of Confirmation — is a total person transforming event. Acts tells us that the Apostles in that Upper Room ran out of it like they were on fire in order to set the world on fire. They were “burning” with the love of Christ and the power of the Spirit, so much so that — like Jeremiah (20:9; see also 23:29) — they could not resist proclaiming him (see Acts 4:20).

Nelson’s painting expresses that all-encompassing consumption that Pentecost (and Confirmation) are, if we allow the Spirit to work as he wills. As we see from their faces (Nelson apparently forgot about Matthias), they are a mix of calm, wonder, prayer, and openness (most explicitly Mary, whose hands are raised to receive but also the Apostles who “lean in” to the fire). They don’t know completely yet what they are getting into, but they understand they are called to get in completely.

Two other observations: the faces and the clothes. The faces of the Apostles, even though they are all “Galileans” (Acts 2:7) appear to reflect something of the diversity of peoples enumerated in Acts (vv. 9-11). And, like Wit Stwosz, the unity around Mary, “Mother of the Church” (Lumen gentium 63) is reinforced by the blue of all the participants’ clothing. Her Memorial, as instituted by Pope Francis we celebrate on the Monday after Pentecost.

Ireland Returns to Worship After M...