Poland to be entrusted to St. Joseph in October 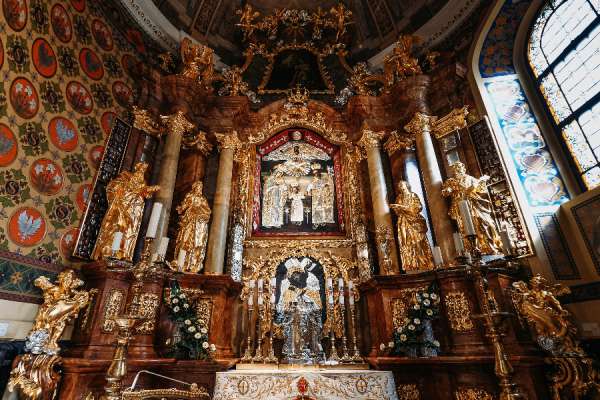 Poland to be entrusted to St. Joseph in October

The act of entrustment of the nation and Church in Poland to St. Joseph will take place at the National Shrine of St. Joseph in Kalisz, central Poland.

The event will occur during the Year of St. Joseph proclaimed by Pope Francis on Dec. 8, 2020, before a celebrated image of St. Joseph in Kalisz.

The shrine, which is a center of prayer for the unborn and families, has continued to offer pastoral care despite restrictions imposed by the pandemic.

When Pope John Paul II visited the shrine in 1997, he described it as “a special place in the history of the Church and of the nation.”

A revered image of the Holy Family at the National Shrine of St. Joseph in Kalisz, Poland / EWTN Poland

Each month thousands of intentions from Poland and all over the world are sent to the shrine, Plota said.

The shrine hosted a novena before the March 19 Feast of St. Joseph. It also held a series of events known as “March evenings with St. Joseph,” when priests preached daily conferences about the foster father of Jesus.

A “Great Novena” will take place from May 28 to June 5 as well as a national retreat.

The shrine’s history is entwined with the Second World War.

On April 22, 1945, Polish priests and monks held at Dachau consecrated themselves to St. Joseph, fearing that guards were planning to murder them as the Allies advanced on the concentration camp.

They promised that if they were spared, they would make an annual pilgrimage to St. Joseph’s Shrine in Kalisz.

Just two hours before the planned execution at the camp — once described as “the largest priest cemetery in the world” — a small U.S. Army patrol unit arrived and saved the prisoners. The Chapel of Martyrdom and Gratitude in the crypt of the National Shrine of St. Joseph in Kalisz, Poland. / EWTN Polska

Several years later, the surviving priests made a pilgrimage to Kalisz to thank St. Joseph for saving them. They continued to make the pilgrimage every year on April 29.

The Chapel of Martyrdom and Gratitude in the crypt of the National Shrine of St. Joseph in Kalisz, Poland. / EWTN Polska

In 1970, they founded the Chapel of Martyrdom and Gratitude in the shrine’s crypt.

At the chapel entrance, there is a representation of a barbed wire fence and a plaque thanking St. Joseph “for deliverance from the abyss of death.”