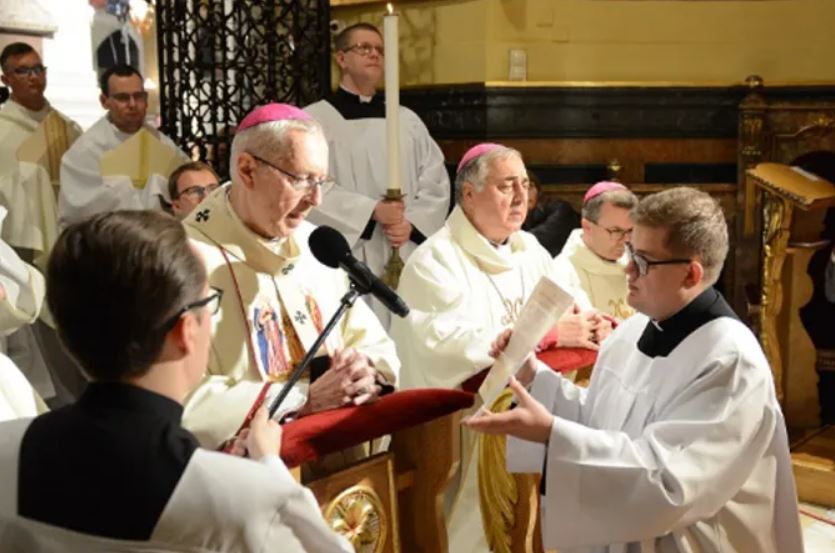 Poland is entrusted to St. Joseph at the National Shrine of St. Joseph in Kalisz, Oct. 7, 2021. / Opiekun.kalisz.pl.

A Catholic archbishop entrusted Poland to St. Joseph on the Feast of Our Lady of the Rosary.

Archbishop Stanisław Gądecki made the act of entrustment of the nation and Church in Poland to St. Joseph on Oct. 7 at the National Shrine of St. Joseph in Kalisz, central Poland.

The live-streamed ceremony took place at the end of a Mass in the Year of St. Joseph before a revered image of the Holy Family.

Pope Francis sent a message expressing gratitude to the Catholic Church in Poland for the act of entrustment.

“Thanking the clergy and the faithful in Poland for the noble initiative of entrusting the nation and the Church to St. Joseph, I wish all those who will perform this act to grow continuously in holiness and grace, and I heartily impart the Apostolic Blessing,” he wrote in a message read out by Kalisz auxiliary Bishop Łukasz Buzun.

Preaching at the Mass, Gądecki said: “We meet today in the national sanctuary in Kalisz for an act of entrustment of the homeland and the Church in Poland to St. Joseph.”

“The time has come for us to better understand his role and, so, the time also to entrust married couples and families to him, to entrust to him the issue of life, of good human work, to entrust the whole homeland and the Church to him.”

Poland, a Central European country of almost 38 million people, around 92% of whom are baptized Catholics, was consecrated to the Sacred Heart of Jesus in June.

At Thursday’s Mass president of the Polish Catholic bishops’ conference repeated his call, made earlier this week, for greater support for migrants caught in the crisis along the roughly 250-mile border between Poland and Belarus.

“I therefore appeal to all people of goodwill so that we may treat service and assistance to foreigners coming to Poland as an opportunity to practice love of neighbor, which is the cornerstone of our faith,” he said.

The Catholic Church in Poland held a “day of solidarity” with the people of Afghanistan on Sept. 5 that included a nationwide collection for the work of Caritas with migrants and refugees, both at home and abroad.

Kalisz has served as a center of devotion to St. Joseph since the 17th century. Tradition holds that an inhabitant of a nearby village was healed through the saint’s intercession and commissioned an image of the Holy Family as a votive offering in 1670.

Each month, thousands of intentions from Poland and all over the world are sent to the shrine, which is a center of prayer for the unborn and families. The image of the Holy Family is considered to be a miracle-working icon.

The shrine’s modern history is entwined with the Second World War.

On April 22, 1945, Polish priests and monks held at Dachau consecrated themselves to St. Joseph, fearing that the guards were planning to murder them as the Allies advanced on the concentration camp.

They promised that if they were spared, they would make an annual pilgrimage to St. Joseph’s shrine in Kalisz.

The guards were preparing to execute them. But two hours before the planned execution at the camp — once described as “the largest priest cemetery in the world” — a small U.S. Army patrol unit arrived and saved the prisoners.

After the war, the clergy who survived Dachau fulfilled their vow, making a pilgrimage to Kalisz every year on April 29. In 1970, they founded a Chapel of Martyrdom and Gratitude in the crypt of St. Joseph’s shrine.

At the chapel entrance, there is a representation of a barbed wire fence and a plaque thanking St. Joseph “for deliverance from the abyss of death.”

Those present at the act of entrustment on Thursday included Archbishop Salvatore Pennacchio, the apostolic nuncio in Poland, Archbishop Wojciech Polak, the Primate of Poland, and bishops from across Poland.

The Catholic Church in Poland is currently undergoing a reckoning following a string of clerical abuse cases.

It announced in June that it had received 368 allegations of clerical abuse in the past two and a half years.

Many of those disciplined have been asked to make donations from their personal funds to the St. Joseph Foundation, established by Poland’s bishops in October 2019 to support abuse victims and promote safeguarding.

In his homily, Gądecki noted the importance of St. Joseph as the patron of the foundation, which seeks to ensure “that no harm is ever again done to children, young people and the disabled.”

A national retreat took place in Poland from Oct. 3 ahead of the act of entrustment. The retreat’s motto was “We Trust in the Father’s Heart” and the event included reflections on St. Joseph as “Guardian of the Church, marriage, life and paternity.”

Archbishop Gądecki made the act of entrustment at the end of the Oct. 7 Mass.

He concluded by saying: “St. Joseph, Protector of the Holy Family and of the Universal Church, drawn by the example of your virtues and trusting in your support, we entrust ourselves to you to be our inspiration and guide in leading a life worthy of Christians.”

“Therefore, we now choose You as our Protector and special Patron, both in life and in death. Amen.”

450th Anniversary of Battle Will S...