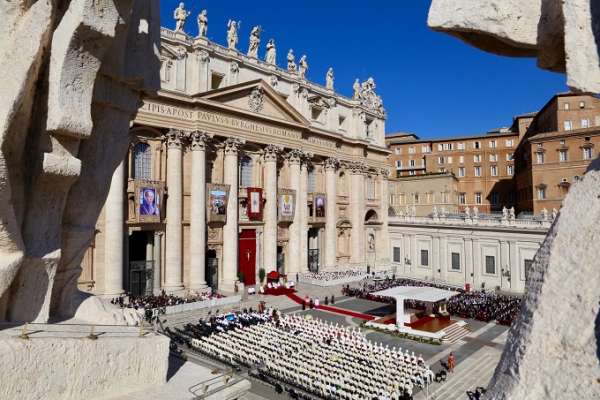 Vatican City, Feb 20, 2021 / 09:10 am (CNA).- Pope Francis has recognized the heroic virtue of three Italian religious sisters who died from Ebola in Africa during the 1995 outbreak.

Sr. Floralba Rondi, Sr. Clarangela Ghilardi, and Sr. Dinarosa Bellerini were members of the Sisters of the Poor, Palazzolo Institute, and were sent as missionaries to the Democratic Republic of Congo.

There, while they were serving the poor, they contracted and died from Ebola hemorrhagic fever within three weeks of each other, when the viral disease broke out in Kikwit. The sisters were in their 50s and 60s.

In six months, 245 people died in the outbreak, including other members of the Sisters of the Poor.

Pope Francis on Feb. 20 recognized the heroic virtue of the three women. His decree means they are now called “venerable.”

The pope also recognized the heroic virtue of Elisa Giambelluca, an Italian laywoman and member of the Teresiana Institute (1941-1986); Sr. Maria Felicita Fortunata Baseggio, an Italian nun of the Order of St. Augustine (1752-1829); and Fr. Ignatius Spencer, a British priest of the Congregation of the Passion of Jesus Christ and convert from Anglicanism (1799-1864).

A few years after Silva was ordained a priest, the 1910 revolution broke out in Portugal and the anti-cleralist Provisional Government took power, expelling the Jesuits and other religious priests, closing convents, forbidding religious teaching in schools, and institutionalizing legal divorce.

Refusing to submit, Silva was arrested, but before he could be exiled to Africa, he escaped, then was smuggled into Spain, eventually being put on a boat for Brazil.

There he served as a parish priest in Catanduva, where he was not initially treated with welcome. Silva eventually won over the love and trust of the community. He constructed a new church, a hospital, and a home for elderly.

Silva also founded schools of higher education, including a faculty of medicine to train up doctors to work in his hospital.

In his last years of life, being in poor health, Silva resided at the hospital, personally helping with patients and other tasks. He died in 1973, two days before his 91st birthday.

On Feb. 20, Pope Francis also approved a miracle attributed to the intercession of Bl. Armida Barelli, an Italian lay woman who was a professed member of the Secular Franciscan Order and the co-founder of the Secular Institute of the Missionaries of the Kingship of Christ.

Barelli was appointed president of the National Girls’ Youth of Catholic Action organization by Pope Benedicts XV in 1918, and in 1921 she established the “Society of Friends of the Catholic University,” again at Benedict XV’s request.

She spent much of her life working to spread the Franciscan charism. She died in 1952, a few years after beginning to suffer the effects of a progressive disease.

With Pope Francis’ approval of a miracle through her intercession, Barelli will be beatified.

The miracle took place in Prato, Italy, in 1989. A 65-year-old woman, Alice Maggini, suffered a severe concussion when she was hit by a truck while riding her bicycle.

The doctors predicted Maggini would have severe neurological consequences from the accident, but after her family prayed through the intercession of Barelli for her healing, she unexplainably had a complete recovery, and went on to live until 2012.