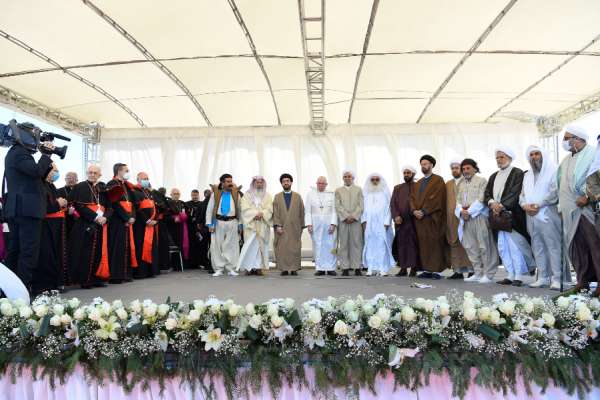 CNA Staff, Mar 6, 2021 / 03:15 am (CNA).- Pope Francis on Saturday appealed for harmony among the followers of the world’s major monotheistic religions at an interreligious meeting in the Plain of Ur, southern Iraq.

Speaking at the ancient site, believed to be the birthplace of Abraham, the pope emphasized the shared heritage of Christians, Muslims and Jews.

“From this place, where faith was born, from the land of our father Abraham, let us affirm that God is merciful and that the greatest blasphemy is to profane his name by hating our brothers and sisters,” he said March 6.

“Hostility, extremism and violence are not born of a religious heart: they are betrayals of religion. We believers cannot be silent when terrorism abuses religion; indeed, we are called unambiguously to dispel all misunderstandings.”

The Bible names Abraham’s birthplace as Ur Kaśdim (translated as Ur of the Chaldeans), leading scholars to identify the southern Iraqi city as the location of his birth.

“This blessed place brings us back to our origins, to the sources of God’s work, to the birth of our religions. Here, where Abraham our father lived, we seem to have returned home,” the pope said, seated in a white chair on a windswept stage.

“It was here that Abraham heard God’s call; it was from here that he set out on a journey that would change history. We are the fruits of that call and that journey. God asked Abraham to raise his eyes to heaven and to count its stars. In those stars, he saw the promise of his descendants; he saw us.”

“Today we, Jews, Christians and Muslims, together with our brothers and sisters of other religions, honor our father Abraham by doing as he did: we look up to heaven and we journey on earth.”

Ur was once a thriving Sumerian city-state in ancient Mesopotamia. The partially restored Ziggurat of Ur, visible during the pope’s live-streamed address, testifies to its storied history. The temple was built in the 21st century BC in honor of the Sumerian moon god and its remains were excavated from the 1920s onwards.

The interreligious meeting began at 11:10 a.m. local time with an opening song. Readings from the Book of Genesis and the Koran were then sung.

The two youths — Dawood Ara, a Christian, and Hasan Salim, a Muslim — work together part-time at a clothing store in Basra to fund their studies.

“Although Dawood and me are not of the same religion, our story shows that we can work together and that we can be friends,” Salim said.

Rafah Husein Baher, an Iraqi Sabean Mandean, told the story of her co-religionist Najy, who lost his life trying to save his Muslim neighbor’s family.

Ali Zghair Thajeel, a professor at the University of Nassiriya, spoke of his efforts to promote pilgrimages to Ur, a city “mentioned in the Holy Bible, the Holy Koran and most of the Divine books.”

Pope Francis then spoke, focusing on the importance of fraternity among “the descendants of Abraham.”

He said: “May we — the descendants of Abraham and the representatives of different religions — sense that, above all, we have this role: to help our brothers and sisters to raise their eyes and prayers to heaven.”

He continued: “We raise our eyes to heaven in order to raise ourselves from the depths of our vanity; we serve God in order to be set free from enslavement to our egos, because God urges us to love. This is true religiosity: to worship God and to love our neighbor.”

In visiting Ur, Pope Francis fulfilled a dream of Pope John Paul II, who hoped to mark the turn of the millennium with a journey “in the footsteps of Abraham.” But the Polish pope was unable to travel to Ur.

In his address, Francis highlighted examples of interreligious cooperation amid the turbulence of 21st-century Iraq.

He said: “When terrorism invaded the north of this beloved country, it wantonly destroyed part of its magnificent religious heritage, including the churches, monasteries and places of worship of various communities.”

“Yet, even at that dark time, some stars kept shining. I think of the young Muslim volunteers of Mosul, who helped to repair churches and monasteries, building fraternal friendships on the rubble of hatred, and those Christians and Muslims who today are restoring mosques and churches together.”

The pope described Abraham’s life story as a “journey outwards.” He said that all believers were required to take a similar path.

Quoting from his latest encyclical, Fratelli tutti, he said: “Still, the temptation to withdraw from others is never-ending, yet at the same time we know that ‘the notion of ‘every man for himself’ will rapidly degenerate into a free-for-all that would prove worse than any pandemic.’”

“Amid the tempests we are currently experiencing, such isolation will not save us. Nor will an arms race or the erection of walls that will only make us all the more distant and aggressive. Nor the idolatry of money, for it closes us in on ourselves and creates chasms of inequality that engulf humanity. Nor can we be saved by consumerism, which numbs the mind and deadens the heart.”

“Peace does not demand winners or losers, but rather brothers and sisters who, for all the misunderstandings and hurts of the past, are journeying from conflict to unity. Let us ask for this in praying for the whole Middle East. Here I think especially of neighboring war-torn Syria.”

Pope Francis said that people who believe in God have “no enemies to fight” apart from the “enemy that stands at the door of the heart and knocks to enter.”

“That enemy is hatred,” he said.

He added: “It is up to us, today’s humanity, especially those of us, believers of all religions, to turn instruments of hatred into instruments of peace. It is up to us to appeal firmly to the leaders of nations to make the increasing proliferation of arms give way to the distribution of food for all.”

“It is up to us to silence mutual accusations in order to make heard the cry of the oppressed and discarded in our world: all too many people lack food, medicine, education, rights and dignity!”

“It is up to us to shed light on the shady maneuvers that revolve around money and to demand that money not end up always and only reinforcing the unbridled luxury of a few.”

Referring to the speeches that preceded his, Pope Francis said: “I was struck by the testimony of Dawood and Hasan, a Christian and a Muslim who, undaunted by the differences between them, studied and worked together. Together they built the future and realized that they are brothers.”

“In order to move forward, we too need to achieve something good and something concrete together. This is the way, especially for young people, who must not see their dreams cut short by the conflicts of the past!”

The pope continued: “Only with others can the wounds of the past be healed. Rafah told us of the heroic example of Najy, from the Sabean Mandean community, who lost his life in an attempt to save the family of his Muslim neighbor. How many people here, amid the silence and indifference of the world, have embarked upon journeys of fraternity!”

At the end of the interreligious meeting, those present recited a “Prayer of the Children of Abraham.”

It read: “Almighty God, our Creator, you love our human family and every work of your hands: As children of Abraham, Jews, Christians and Muslims, together with other believers and all persons of good will, we thank you for having given us Abraham, a distinguished son of this noble and beloved country, to be our common father in faith.”

“We thank you for his example as a man of faith, who obeyed you completely, left behind his family, his tribe and his native land, and set out for a land that he knew not. We thank you too, for the example of courage, resilience, strength of spirit, generosity and hospitality set for us by our common father in faith.”

“We thank you in a special way for his heroic faith, shown by his readiness even to sacrifice his son in obedience to your command. We know that this was an extreme test, yet one from which he emerged victorious, since he trusted unreservedly in you, who are merciful and always offer the possibility of beginning anew.”

“We thank you because, in blessing our father Abraham, you made him a blessing for all peoples. We ask you, the God of our father Abraham and our God, to grant us a strong faith, a faith that abounds in good works, a faith that opens our hearts to you and to all our brothers and sisters; and a boundless hope capable of discerning in every situation your fidelity to your promises.”

“Make each of us a witness of your loving care for all, particularly refugees and the displaced, widows and orphans, the poor and the infirm. Open our hearts to mutual forgiveness and in this way make us instruments of reconciliation, builders of a more just and fraternal society.”

“Welcome into your abode of peace and light all those who have died, particularly the victims of violence and war. Assist the authorities in the effort to seek and find the victims of kidnapping and in a special way to protect women and children.”

“Help us to care for the earth, our common home, which in your goodness and generosity you have given to all of us. Guide our hands in the work of rebuilding this country, and grant us the strength needed to help those forced to leave behind their homes and lands, enabling them to return in security and dignity, and to embark upon a new, serene and prosperous life. Amen.”

After a final song and group photo with religious leaders, the pope returned to Nassiriya Airport for a flight back to Baghdad, which was expected to land at 13.20 local time.

Pope Francis in the Nineveh Plains...