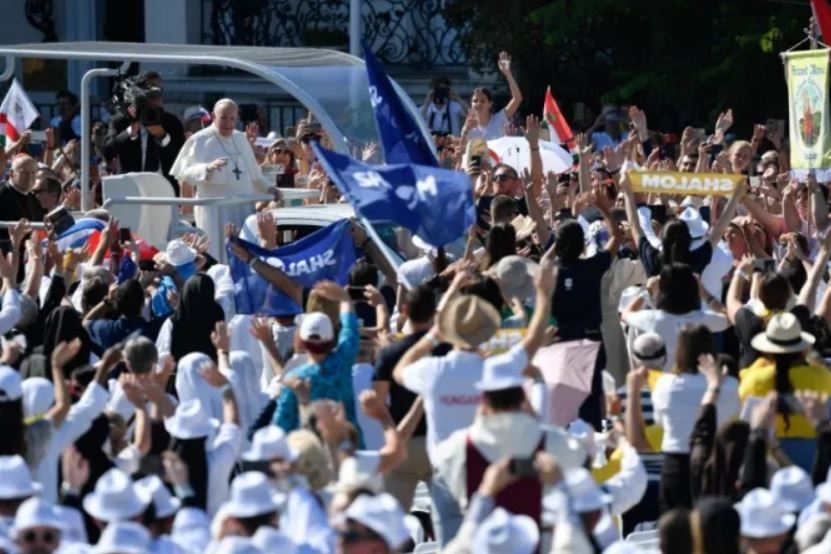 Pope Francis encouraged Catholics at the International Eucharistic Congress in Budapest to spend more time in adoration of the Blessed Sacrament to become more like Christ.

“Dear brothers and sisters, let us allow our encounter with Jesus in the Eucharist to transform us, just as it transformed the great and courageous saints you venerate,” Pope Francis said in his homily in Hungary on Sept. 12.

“We do well to spend time in adoration before the Eucharist in order to contemplate God’s weakness. Let’s make time for adoration,” the pope said.

Pope Francis is the first pope to attend an International Eucharistic Congress since the year 2000. He offered the closing Mass for a crowd of tens of thousands gathered in Heroes’ Square in Budapest.

“The Eucharist is here to remind us who God is. It does not do so just in words, but in a concrete way, showing us God as bread broken, as love crucified and bestowed,” the pope said.

“Today, as in the past, the cross is not fashionable or attractive,” he said. “Yet it heals us from within. Standing before the crucified Lord, we experience a fruitful interior struggle, a bitter conflict between ‘thinking as God does’ and ‘thinking as humans do.’”

The pope said that God’s way of humble love is different from “the wisdom of the world,” which is attached to self-importance and power, “grasping for prestige and success.”

“There is God’s side and the world’s side. The difference is not between who is religious or not, but ultimately between the true God and the ‘god of self,’” he said.

“How different is Christ, who presents himself with love alone, from all the powerful and winning messiahs worshiped by the world. Jesus unsettles us; he is not satisfied with declarations of faith, but asks us to purify our religiosity before his cross, before the Eucharist.”

Pope Francis said that prayer in adoration before the Blessed Sacrament can be transformative.

“Let us allow Jesus the Living Bread to heal us of our self-absorption, open our hearts to self-giving, liberate us from our rigidity and self-concern, free us from the paralyzing slavery of defending our image, and inspire us to follow him wherever he would lead us,” he said.

The pope arrived at the closing Mass in a popemobile. He kissed babies and waved to the crowd, who cheered enthusiastically as he passed.

Local authorities reported that around 100,000 people were in attendance at the papal Mass in Budapest, in addition to the people gathered along the streets to wave as Pope Francis made his way to Heroes’ Square in the popemobile.

“The Christian journey is not a race towards ‘success;’ it begins by stepping back, finding freedom by not needing to be at the center of everything,” Francis said.

“It is to step out each day … to an encounter with our brothers and sisters. The Eucharist impels us to this encounter, to the realization that we are one Body, to the willingness to let ourselves be broken for others,” he said.

After the Mass, Pope Francis prayed the Marian Angelus prayer with the crowd in Budapest.

In his Angelus address, the pope commended the example of Cardinal Stefan Wyszyński and Elizabeth Czacka who were beatified on Sunday in Warsaw, Poland.

“May the example of these new Blesseds encourage us to transform darkness into light with the power of love,” he said.

The Mass in Budapest concluded the pope’s seven-hour trip to Hungary. After a brief farewell ceremony at the Budapest International Airport, the pope will depart for Slovakia, where he will visit four cities on Sept. 12-15.

“I want to say köszönöm, thank you, thank you to you, the people of Hungary,” he said in his Angelus address.

“This is what I wish for you: that the cross be your bridge between the past and the future. Religious sentiment has been the lifeblood of this nation, so attached to its roots. Yet the cross, planted in the ground, not only invites us to be well-rooted, it also raises and extends its arms towards everyone,” he said.

“The cross urges us to keep our roots firm, but without defensiveness; to draw from the wellsprings, opening ourselves to the thirst of the men and women of our time.”