Pope Francis Believed to be Preparing Restrictions for the Traditional Mass 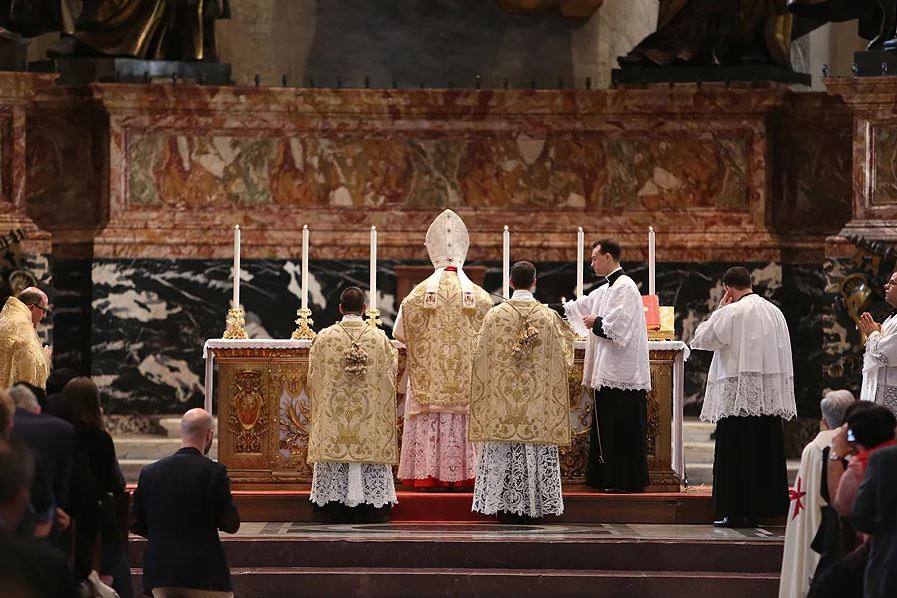 Pope Francis Believed to be Preparing Restrictions for the Traditional Mass

One of the proposals on the table is to require that priests who want to celebrate the Traditional Mass will have to establish a specific community at a specific church.

VATICAN CITY — The Congregation for the Divine Worship might soon issue a document modifying some of the provisions of Benedict XVI’s motu proprio Summorum Pontificum, a source within the congregation told CNA.

Rumors about possible restrictions imposed on Summorum Pontificum spread last week after the Pope had a closed-door Q&A with the members of the Italian bishops conference gathered in Rome for their annual plenary assembly.

Speaking with the bishops, the pope indeed hinted at new regulations about the celebrations of the Mass in the extraordinary form, although he did not get into details, two bishops attending the conference told CNA.

According to the sources, the pope did say that a third draft of the document is currently under study.

With Summorum Pontificum, Benedict XVI universally liberalized the celebration of the Mass according to the Missal of St. John XXIII.

In the letter to the bishops accompanying the motu proprio to all bishops in 2007, Benedict XVI established that “in the history of the liturgy there is growth and progress, but no rupture. What earlier generations held as sacred, remains sacred and great for us too, and it cannot be all of a sudden entirely forbidden or even considered harmful.”

He added, “I would like to draw attention to the fact that this Missal [that of 1962] was never juridically abrogated and, consequently, in principle, was always permitted.”

According to CNA’s source at the Congregation for the Divine Worship, the modifications to Summorum Pontificum would restore the need to get consent from the local bishop to celebrate it. The source said that this and other possible changes “have been requested by some local bishops, complaining about the need to better regulate the conditions for celebrating the Mass in the Ancient Rite.”

The sourced said that the most common complaint is that “sometimes, the group of people requesting the Vetus Ordo is tiny, and adding such celebration and keeping the church open for such small amount of people can be troublesome in dioceses with priests’ shortage.”

In 2020, the Congregation for the Doctrine of the Faith sent a nine-point questionnaire about Summorum Pontificum to the presidents of bishops’ conferences worldwide, since the Pope wished to be “informed about the current application” of the motu proprio.

But the document will not come for the Congregation for the Doctrine of the Faith but from Divine Worship.

One of the proposals on the table is to require that priests who want to celebrate the Traditional Mass will have to establish a specific community at a specific church.

CNA’s source said that the first two drafts of the document ended up being “too tough” on the priests and faithful devoted to the Vetus Ordo. The third revision, according to the source, takes more into account “the possibility that restrictive regulations might be perceived as a step back in the path of the liturgical harmony desired by Benedict XVI.”

The source said that completing the last draft and prepared for publication is the task the new undersecretary of the congregation, Msgr. Aurelio García Masías.

Msgr. García will be consecrated a bishop next month, a dignity not typically given to undersecretaries.

According to CNA’s source, this unusual decision might mean that Pope Francis is inclined to move the competencies on communities attached to the Traditional Latin Mass from the CDF to Divine Worship.

Inside the search for Polish Catho...