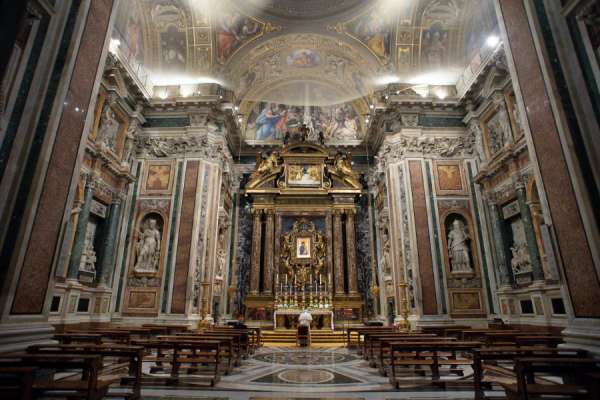 Rome Newsroom, Mar 4, 2021 / 12:00 pm (CNA).- On the eve of his departure for a three-day trip to Iraq, Pope Francis visited a Rome basilica to ask for the Virgin Mary’s intercession and protection on his travels.

According to the Holy See press office, Pope Francis went to the Basilica of St. Mary Major March 4 “for a moment of prayer” before the Byzantine icon of Salus Populi Romani, Mary, Protection of the Roman People.

It has been Pope Francis’ custom to visit the icon before his international trips to ask for the Virgin Mary’s protection.

He also typically visits the icon upon returning to Rome and before re-entering the Vatican.

Pope Francis is visiting Iraq on March 5-8 in a trip intended to strengthen the hope of the country’s persecuted Christian minority and to foster fraternity and interreligious dialogue.

In just over three days, Francis is scheduled to travel 900 miles within Iraq, meeting with political leaders, prominent Muslim clerics, and Christian communities. He will be the first pope in history to visit the Middle Eastern country.

This afternoon, on the eve of his departure for #Iraq, #PopeFrancis went to the Basilica of St Mary Major for a moment of prayer before the icon of the Virgin Salus Populi Romani, entrusting his coming apostolic journey to her protection. pic.twitter.com/O9H6atO4Le

The icon of Salus Populi Romani has been revered by the people of Rome for centuries and is considered a symbol of the city and its people.

In March 2020, Pope Francis visited the icon as part of a short walking prayer pilgrimage he made during Italy’s coronavirus lockdown.

At the end of his general audience on March 3, Pope Francis asked people to accompany him with their prayers during his trip to Iraq, “so that it may unfold in the best possible way and bear the hoped-for fruits.”

“The Iraqi people are waiting for us; they awaited St. John Paul II, who was not permitted to go. One cannot disappoint a people for the second time. Let us pray that this journey will be a good one,” he said.

Custos Fr. Francesco Patton, O.F.M., wrote March 4 to the Franciscan friars of the Custody of the Holy Land, asking them to accompany the pope’s trip to Iraq with “a special and intense prayer.”

He included a schedule of specific ways to pray each day of the pope’s trip, including fasting and meditation on the Stations of the Cross on Friday, March 5, and praying a rosary and reading chapter eight of the encyclical “Fratelli tutti” on Saturday.

Patton said that the community’s Mass at Calvary on Sunday, March 7, would be offered for the eternal repose of the victims of the war in Iraq and the gift of peace in the entire Middle East.

On the day of the pope’s return, Monday, March 8, he invited the friars to offer their personal prayers.

“Let’s live this moment with faith, in union with the Holy Father and with our brothers in Iraq,” he said.

‘Ordet’ is an Excellent Movie for...