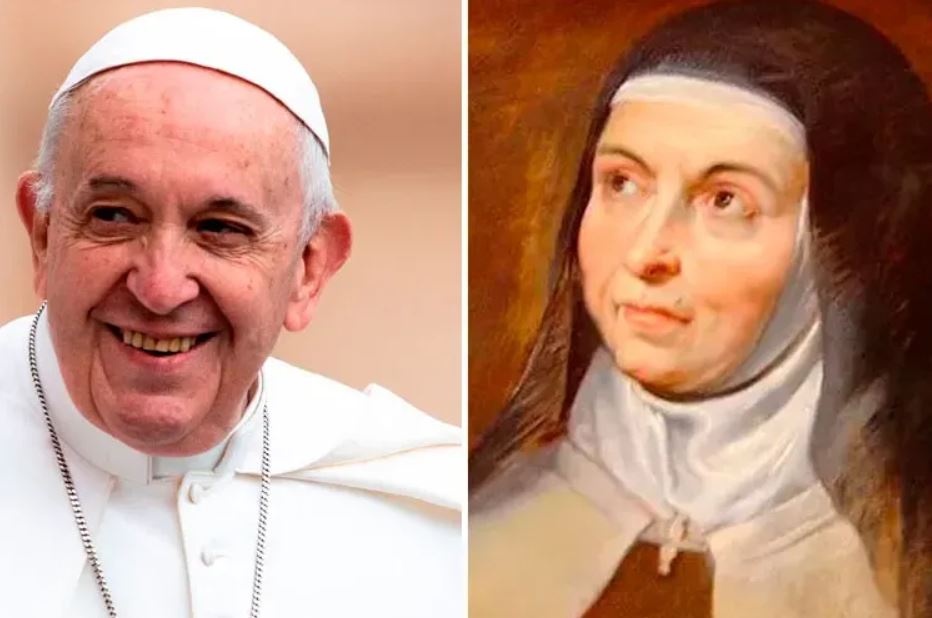 Pope Francis has hailed St. Teresa of Ávila as exemplar of courage and spiritual motherhood in a letter marking fifty years since the 16th century Spanish mystic was declared the first female Doctor of the Church.

“Despite the five centuries that separate us from her earthly existence, the flame that Jesus lit within Teresa continues to shine in this world that is always in need of brave witnesses, capable of breaking any barrier, be it physical, existential or cultural,” Pope Francis wrote in the letter.

The pope’s letter to Bishop José María Gil Tamayo of Ávila was read aloud at the inaugural Mass for an international congress on St. Teresa that is taking place in Ávila, Spain and virtually via livestream April 12-15.

“Her courage, her intelligence, and her tenacity to which she united a sensitivity for the beautiful and a spiritual motherhood toward all those who approached her work, are an exemplary example of the extraordinary role that women have played throughout history in the Church and society.”

Since St. Teresa, three other female saints have been declared Doctors of the Church. St. Catherine of Siena was recognized with the title one week after St. Teresa. And St. Therese of Lisieux and St. Hildegard of Bingen were declared Church doctors by Popes John Paul II and Benedict XVI respectively.

In his letter, Pope Francis said St. Teresa of Ávila “continues to speak to us today through her writings and her message is open to all.”

“Having her as a friend, companion and guide in our earthly pilgrimage confers security and peace to the soul,” he added.

St. Teresa was a Spanish Carmelite reformer and mystic. She was born in the Castilian city of Ávila during the year 1515, the third child in a family descended from Jewish merchants who had converted to Christianity during the reign of King Ferdinand and Queen Isabella.

When she was nearly 40, Teresa experienced profound changes within her own soul in contemplative prayer, and remarkable visions that seemed to come from God. Under the direction of her confessors, Teresa wrote about some of these experiences in an autobiography that she completed in 1565.

This revolution in her spiritual life enabled Teresa to play a significant role in the renewal of the Church that followed the Council of Trent. She proposed a return of the Carmelites to their original rule of life, a simple and austere form of monasticism – founded on silence and solitude – that had received papal approval in the 12th century and was believed to date back to the Old Testament prophet Elijah.

Together with her close collaborator, the priest and writer later canonized as Saint John of the Cross, she founded what is known today as the Order of Discalced Carmelites – “discalced,” meaning barefoot, symbolizing the simplicity to which they chose to return the order after a period of corruption. The reform met with fierce opposition, but resulted in the founding of 30 monasteries before her death in 1582.

St. Teresa of Ávila was canonized on March 22, 1622, along with St. Ignatius Loyola, St. Francis Xavier, and St. Philip Neri.

In his letter, Pope Francis encouraged the priests, religious, and laity involved in the international congress on St. Teresa to continue spreading her teaching.

The international congress is the joint effort of the Catholic University of St. Teresa of Ávila, the Discalced Carmelites, the local diocese, and the “Katholische Universität Eichstätt-Ingolstadt” in Germany. Speakers at the conference include Cardinal Aquilino Bocos Merino and Cardinal Ricardo Blázquez Pérez, the archbishop of Valladolid.

Pope Francis signed his letter to the congress on March 19, the feast of St. Joseph, and noted that St. Teresa of Ávila had a great devotion to St. Joseph.

“She took him as a teacher, advocate, and intercessor. She entrusted herself to him, having certainty that she would receive the graces that she asked for. From this experience, she encouraged others to do the same,” the pope said.

“The saints always go hand in hand, and they sustain us by the trust placed in their intercession. May they intercede for you,” Pope Francis said.