Pope Francis in Erbil: ‘Today I can see at first hand that the Church in Iraq is alive’ 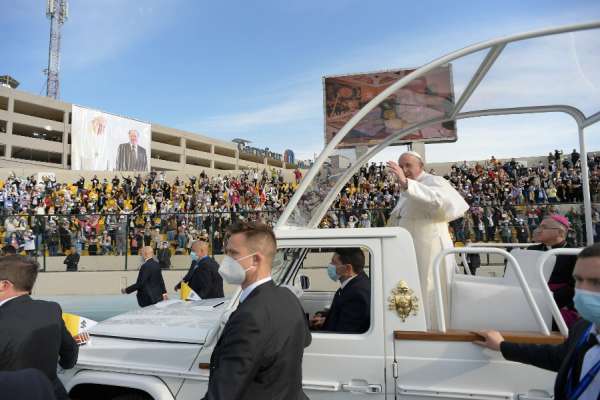 Pope Francis in Erbil: ‘Today I can see at first hand that the Church in Iraq is alive’

CNA Staff, Mar 7, 2021 / 08:50 am (CNA).- Pope Francis on Sunday expressed joy at the vitality of the Church in Iraq despite years of fierce persecution.

Celebrating Mass in the Franso Hariri Stadium in Erbil on March 7, the pope praised the country’s dwindling Christian community for its care for the poor.

“The Church in Iraq, by God’s grace, is already doing much to proclaim this wonderful wisdom of the cross by spreading Christ’s mercy and forgiveness, particularly towards those in greatest need,” he told an estimated 10,000 people gathered in the stadium.

“Even amid great poverty and difficulty, many of you have generously offered concrete help and solidarity to the poor and suffering. That is one of the reasons that led me to come as a pilgrim in your midst, to thank you and to confirm you in your faith and witness.”

“Today, I can see at first hand that the Church in Iraq is alive, that Christ is alive and at work in this, his holy and faithful people.”

The pope was visiting the capital of the Kurdistan Region on the final day of a three-day trip to Iraq intended to strengthen the hope of the country’s persecuted Christian minority and foster fraternity and interreligious dialogue.

On his first foreign trip since the outbreak of the coronavirus pandemic, Francis made history by becoming the first pope to visit Iraq.

In a mark of the visit’s impact on the war-ravaged country, Prime Minister Mustafa Al-Kadhimi declared March 6 a National Day of Tolerance and Coexistence in honor of Pope Francis’ landmark meeting with the country’s top Shiite cleric, Grand Ayatollah Ali al-Sistani.

Celebrating Mass on the Third Sunday of Lent, the pope noted that many Iraqis bore “the wounds of war and violence … both visible and invisible.”

Near him stood a restored Marian statue vandalized by the Islamic State during its occupation of villages in the Nineveh Plains from 2014 to 2017. The statue’s hands hung from sockets in a reminder of its mutilation.

Many Christians were forced to flee their homes, seeking refuge in the Kurdistan Region and abroad. Before Saddam Hussein was deposed in 2003, there were 1.4 million Christians in Iraq. Today there are no more than 250,000.

“The temptation is to react to these and other painful experiences with human power, human wisdom. Instead, Jesus shows us the way of God, the path that he took, the path on which he calls us to follow him,” the pope said, preaching in the stadium named in honor of Erbil’s first Christian governor, assassinated in 2001.

There was a joyous atmosphere at the Mass, with a small group from the Neocatechumenal Way at the back of the stadium leading festivities before the pope’s arrival.

The Prayer of the Faithful was said in Assyrian, Arabic, Kurdish, and English, in a sign of the diversity of Iraqi Christianity.

Reflecting on the day’s Gospel reading, the cleansing of the Temple (John 2:13-25), the pope said: “Jesus not only cleanses us of our sins, but gives us a share in his own power and wisdom. He liberates us from the narrow and divisive notions of family, faith and community that divide, oppose and exclude, so that we can build a Church and a society open to everyone and concerned for our brothers and sisters in greatest need.”

“At the same time, he strengthens us to resist the temptation to seek revenge, which only plunges us into a spiral of endless retaliation. In the power of the Holy Spirit, he sends us forth, not as proselytizers, but as missionary disciples, men and women called to testify to the life-changing power of the Gospel.”

The pope began his final full day in Iraq at the apostolic nunciature in Baghdad. He flew to Erbil, where he was welcomed by Chaldean Archbishop Bashar Warda, Syrian Catholic Archbishop Nizar Semaan, and the president and prime minister of the Kurdistan Region.

The pope then transferred by helicopter to Mosul, Iraq’s second-largest city, where he offered prayers for victims of war.

Francis traveled on to Bakhdida, also known as Qaraqosh, where he met local Christians at the Church of the Immaculate Conception.

The pope had lunch at the Patriarchal Seminary of St. Peter in Erbil, leaving a wooden sculpture of St. Joseph as a gift. He arrived at the stadium to celebrate Mass around 4 p.m. local time and was driven past the congregation in a popemobile — the vehicle’s only outing in Iraq — surrounded by masked security guards.

Preparations for the Mass started early on Sunday morning, with 250 young volunteers buzzing around the altar, setting up signs for VIPs, and following instructions from enthusiastic priests.

Eighteen-year-old Joseph told CNA: “This is an opportunity of a lifetime, to have the chance to work for the Holy Father coming to our land. I still can’t believe this is about to happen.”

Matilda, 16, said: “I feel we are following the Gospel, ‘what you got freely, give it freely,’ especially when we are doing it for a man of God like Pope Francis.”

Hannah, 17, commented: “I do believe that the pope’s visit will not be just a moment. This will be a source of hope for us, for young people, for everyone in Kurdistan.”

The Kurdistan Region has one of the lowest emigration rates in Iraq. But according to a source from the Chaldean Catholic Archdiocese of Erbil, speaking to CNA on background, “migrants are disproportionately Christian and disproportionately young.”

While adjusting chairs for the choir, Sarah, 17, said: “I really hope the pope inspires our people to stay. But in any way, this experience will stay in our hearts and will be unforgettable.”

Joseph added: “I also hope our generation will stay. I really hope so.”

At the end of Mass, as the sun lowered over the stadium, Archbishop Warda thanked the pope on behalf of Iraqi Christians.

He said: “Pope Francis, we know that Christ and you are with us. Your courage flows now into us. Then, we give our thanks to you for your prayers for the persecuted and the marginalized, here in Iraq and around the world.”

“Finally, we give you thanks for the message of peace you have brought to Erbil and to all of Iraq. Your powerful message of brotherhood and forgiveness is a gift now to all the people of Iraq, which leaves us, everyone one of us in this land, with a lasting responsibility to bring continuing life to your message in our daily lives from this day forward. May God grant you safety in your travels. You will be forever in our prayers.”

Before giving the final blessing, the pope greeted Mar Gewargis III, Catholicos-Patriarch of the ancient Assyrian Church of the East, who lives in Erbil.

“Together with him I embrace the Christians of the various denominations, many of whom have shed their blood in this very land,” he said. “Yet our martyrs shine together like stars in the same sky! From there they call us to walk together, without hesitation, towards the fullness of unity.”

He continued: “In my time among you, I have heard voices of sorrow and loss, but also voices of hope and consolation. This was due in large part to that tireless charitable outreach made possible by the religious institutions of every confession, your local Churches and the various charitable organizations assisting the people of this country in the work of rebuilding and social rebirth.”

As he prepared to leave the stadium for Baghdad, where he will stay overnight before flying back to Rome on Monday, the pope said: “Now the time draws near for my return to Rome. Yet Iraq will always remain with me, in my heart. I ask all of you, dear brothers and sisters, to work together in unity for a future of peace and prosperity that leaves no one behind and discriminates against no one.”

“I assure you of my prayers for this beloved country. In a particular way, I pray that the members of the various religious communities, together with all men and women of goodwill, may work together to forge bonds of fraternity and solidarity in the service of the common good and of peace.”

Pope Francis in the Nineveh Plains...

7 Things Everyone Needs to Know Ab...