Pope Francis in the Nineveh Plains: ‘Terrorism and Death Never Have the Last Word’ 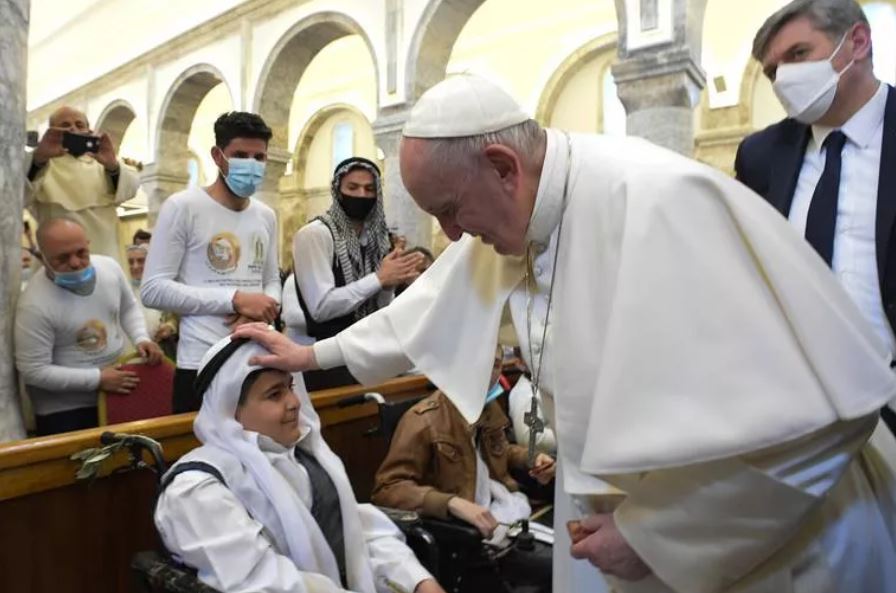 Pope Francis in the Nineveh Plains: ‘Terrorism and Death Never Have the Last Word’

Pope Francis prayed the Angelus with the local Christians, and added that he was grateful for the courage of mothers and all women in Iraq, praying that women in Iraq will be respected, protected, and provided with opportunities.

NINEVEH, Iraq — Pope Francis entrusted the rebuilding of Christian communities in the Nineveh Plains to the protection of the Virgin Mary at a church that was once desecrated and burned by the Islamic State.

The pope prayed the Sunday Angelus on March 7 with Christians at a church in Bakhdida, also known as Qaraqosh, a town 20 miles southeast of Mosul occupied by ISIS from 2014 to 2016.

“Our gathering here today shows that terrorism and death never have the last word. The last word belongs to God and to his Son, the conqueror of sin and death,” Pope Francis said in the Syriac Catholic Immaculate Conception Church.

“Even amid the ravages of terrorism and war, we can see, with the eyes of faith, the triumph of life over death.”

The pope said he was moved by the testimonies shared of Christians from the region once devastated by the Islamic State, particularly that of Doha Sabah Abdallah.

“On the morning of August 6, 2014, the city of Bakhdida was awakened by the din of the bombing. We all knew that ISIS was upon us, and that three weeks earlier it had invaded the towns and villages of the Yazidis and treated them with cruelty. So we fled the city, leaving our homes; after two or three days we returned, supported by our strong faith and in the conviction that, being Christians, we are ready for martyrdom,” she said.

“That morning we were busy with the usual things and the children were playing in front of our houses, when an accident happened that forced us to go out. I heard a mortar shell and ran out of the house. The children’s voices fell silent as the screams of the adults increased. They informed me of the death of my son and his cousin, and of the young neighbor who was preparing for marriage.”

The Iraqi woman added: “Our strength undoubtedly comes from our faith in the Resurrection, a source of hope. My faith tells me that my children are in the arms of Jesus Christ our Lord. And we, the survivors, try to forgive the aggressor, because our Master Jesus has forgiven his executioners. By imitating him in our sufferings, we testify that love is stronger than everything.”

A local priest shared how God protected him amid gunfire and a car bomb in Mosul, which exploded a few meters away.

“The road to a full recovery may still be long, but I ask you, please, not to grow discouraged. What is needed is the ability to forgive, but also the courage not to give up,” Pope Francis said.

The church where the pope met the local Christians was recently completely restored after it was burned by the Islamic State, and a new Marian statue sculpted by a local Christian artist was placed atop the bell tower of the Immaculate Conception Church in January.

“Now is the time to rebuild and to start afresh, relying on the grace of God, who guides the destinies of all individuals and peoples,” the pope said.

“You are not alone! The entire Church is close to you, with prayers and concrete charity.”

Before the pope’s remarks, Syriac Patriarch Ignatius Youssef III Younan of Antioch thanked Catholic charitable organizations that worked to rebuild destroyed churches and homes in the region, enabling Christians to return. He mentioned Aid to the Church in Need, L’Œuvre d’Orient, the Knights of Columbus, and the Hungarian government.

“The crowd that welcomed you, as father and pastor, is a part of those Christians who were uprooted in 2014 from their homes in Qaraqosh, Bartella, Baashika, Karemless, and other villages in the Nineveh Plains,” Younan said.

“Here, in the Nineveh Plains, a biblical land, in that month of August 2014, thousands of Christians, with their bishops, priests and religious, were, because of their faith, uprooted from their land and forced to seek refuge in Kurdistan,” he said.

He added: “We are proud that, despite the horrors of the persecution, the faithful present here with their refugee and distant families have remained faithful to their unwavering love for the Gospel of peace and justice, following the example of their heroic ancestors.”

Pope Francis said that this was the time “to restore not just buildings, but also the bonds of community.”

The pope prayed the Angelus with the local Christians, and added that he was grateful for the courage of mothers and all women in Iraq, praying that women in Iraq will be respected, protected, and provided with opportunities.

“As I arrived on the helicopter, I saw the statue of Mary on this Church of Immaculate Conception. To her I entrusted the rebirth of this city. Our Lady does not only protect us from on high, but comes down to us with a Mother’s love,” the pope said.

“Her image here has met with mistreatment and disrespect, yet the face of the Mother of God continues to look upon us with love. For that is what mothers do: they console, they comfort and they give life.”

The pope encouraged the Iraqi Christians to “not lose hope,” encouraging them to “never tire of asking the saints for their intercession.”

“Let us pray tirelessly for the conversion of hearts and for the triumph of a culture of life, reconciliation and fraternal love between all men and women, with respect for differences and diverse religious traditions, in the effort to build a future of unity and cooperation between all people of goodwill,” he said.