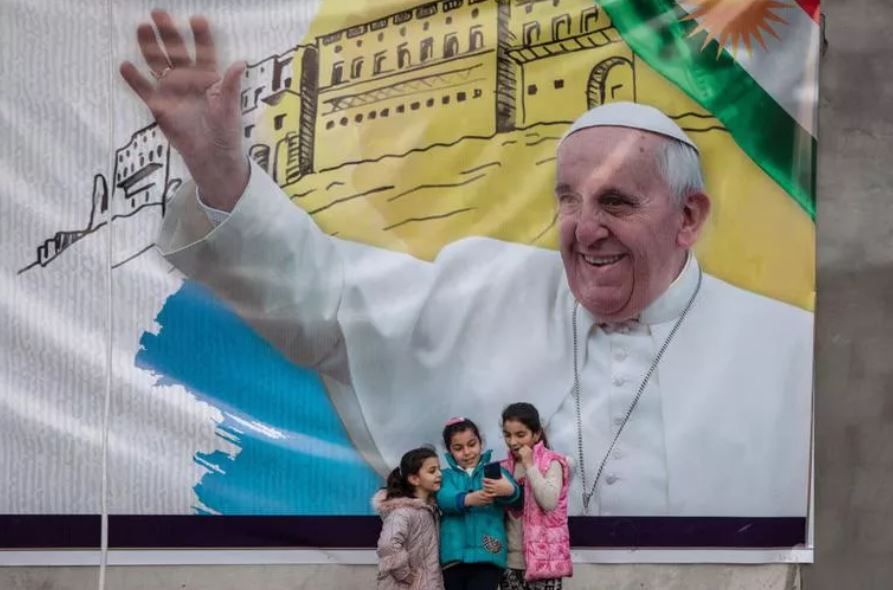 COMMENTARY: A specific dimension of the Holy Father’s visit will lift up the figure of Abraham, which Pope St. John Paul II planned to do 21 years earlier.

Pope Francis will arrive in Iraq tomorrow to comfort and strengthen the beleaguered Christian community and to advance the “Human Fraternity” project that he launched two years ago in the United Arab Emirates.

There is also a biblical purpose, to honor the role of Abraham, “our father in faith,” in the history of salvation. That is unfinished business from the Great Jubilee of the Year 2000. The visit of Pope Francis fulfills the desire of St. John Paul II to visit 21 years ago. Saddam Hussein made the visit impossible.

“The people of Iraq are waiting for us,” said Pope Francis at his Wednesday audience. “They were waiting for Pope St. John Paul II, who was not allowed to go. The people cannot be let down for a second time. Let us pray that this trip can be carried out well.”

John Paul had planned a great biblical pilgrimage for the Jubilee — Egypt for the Exodus, Israel and the Palestinian Authority for the Gospels. In 2001 he would conclude the pilgrimage in the footsteps of St. Paul, visiting Syria, Greece and Malta. But he wanted to begin in Iraq.

“The first stage of the journey which I hope to make is linked to Abraham,” he wrote in a June 1999 letter on pilgrimage to the holy places. “In fact, if it be God’s will, I would like to go to Ur of the Chaldees, the present-day Tell el-Muqayyar in southern Iraq, the city where, according to the biblical account, Abraham heard the word of the Lord which took him away from his own land, from his people, from himself in a sense, to make him the instrument of a plan of salvation which embraced the future people of the Covenant and indeed all the peoples of the world.”

The biblical dimension of the Holy Father’s visit will lift up the figure of Abraham, emphasizing his call away from Ur toward the Promised Land, rather than the more famous episodes of his life, such as the sacrifice of Isaac at Moriah.

The call of Abraham — “Abram” is his name at the time — is both fascinating and enigmatic. Abram’s call begins the entire history of salvation; it bears closed examination. Herewith a “W5” primer.

Abram is a 75-year-old man of some means when he is called. His name — always significant in the Bible — means “lofty father,” which is a bit strange, given that he is childless, despite his long marriage to Sarai. God will eventually change his name to Abraham, “father of multitudes.”

Abram’s childlessness is remarkable. At the time, polygamy was not uncommon, nor was the generation of children with concubines or slaves, as Abraham himself would eventually do. Is there an unusual fidelity about Abram? Is that why he was called? We are not told. Nor is it explained why Abram goes where the Lord calls him.

“The text is absolutely (and happily) silent regarding Abram’s motives for answering God’s call,” writes Leon Kass in his masterful commentary on Genesis, The Beginning of Wisdom. Is Abram a pious man awaiting the Lord’s call? Or does Abram have some qualities that make him suitable? We don’t know, but can speculate.

“To establish a great and godly nation in the midst of a hostile world, God will need to tap a bold and ambitious man,” Kass writes. “Also because God can neither extirpate pride from the human soul or eliminate man’s desire for greatness and fame — recall the Babel builders’ unanimous wish to “make us a name” — it makes excellent sense that He should enlist man’s ambition and pride in His project to subdue them.”

The call of Abram is more about what God will do than it is about Abram:

“Now the Lord said to Abram, ‘Go from your country and your kindred and your father’s house to the land that I will show you. And I will make of you a great nation, and I will bless you, and make your name great, so that you will be a blessing. I will bless those who bless you, and him who curses you I will curse; and by you all the families of the earth shall bless themselves” (Genesis 12:1-3).

Abram is to go. It is God who will show, make, bless, and curse. The call of Abram is about God revealing what he will do, the beginning of his plan of salvation. What will God do? He will establish a new nation in another land. He will not wipe out the nations and devastate the lands, as he did in the flood. With Abram, God will save mankind from within, not from without.

The call of Abram follows immediately upon the Tower of Babel (Genesis 11:1-9). There the men of the earth, all of one language, conspire together to build a tower that will have its “top in the heavens.” The project has at least aspirations to salvation; man will save himself through his own efforts. He will reach the heavens which have been closed to him.

At the same time, the builders wish to “make a name for ourselves.” It is a project both of salvation and self-exaltation.

God confounds the men of Babel, frustrating their project. And then he turns to Abram, promising that he “will make your name great.” God will save man, not man himself. It is perhaps for that reason that God commands Abram to leave his land, his holdings, his kinsfolk — anything that Abram might use to exalt himself. Stripped of all that he might use to build, and without children, Abram will have to rely upon God to “make a name.”

God’s begins his new project of salvation at a particular time, the clues about which are given in the ages of the ancient Genesis figures. Noah belongs to the first generation that did not overlap with Adam’s lifespan. It signifies that with Noah is a new beginning, leaving behind Adam and his generations.

In contrast, Abram belongs to the last generation born in Noah’s lifespan. Abram is not an entirely new beginning like Noah was; the covenant with Abraham will be in continuity with the covenant made with Noah.
There will not be another flood, another quick fix. God begins instead a long project of education by successive covenants until the fullness of time, when the incarnation in Jesus Christ, son of Abraham, will fully reveal who God is.

Abraham is the first great pilgrim. He moves from one place to another at God’s command, in obedience to a divine mission, seeking the fulfilment of his promise. That promise is linked inextricably to the land, already a foreshadowing of the incarnation. To be incarnate is to belong to a certain people and a certain land; God begins to fashion that people and prepare that land with Abram setting out for the land of Canaan.

Abraham’s journeys will take him as far as Egypt, setting up shrines and offering sacrifices as he goes. The summit of those travels is Mount Moriah, where he prepares to sacrifice Isaac and where, by tradition, Solomon builds the Temple.

The Temple Mount, even today, remains one of the holiest places on earth for Jews, Christians and Muslims. That is the legacy of Abraham, which Pope Francis will honor at its origins.
Share With:
Previous Article

‘Ordet’ is an Excellent Movie for...