Pope Francis leads Via Crucis seen through the eyes of children 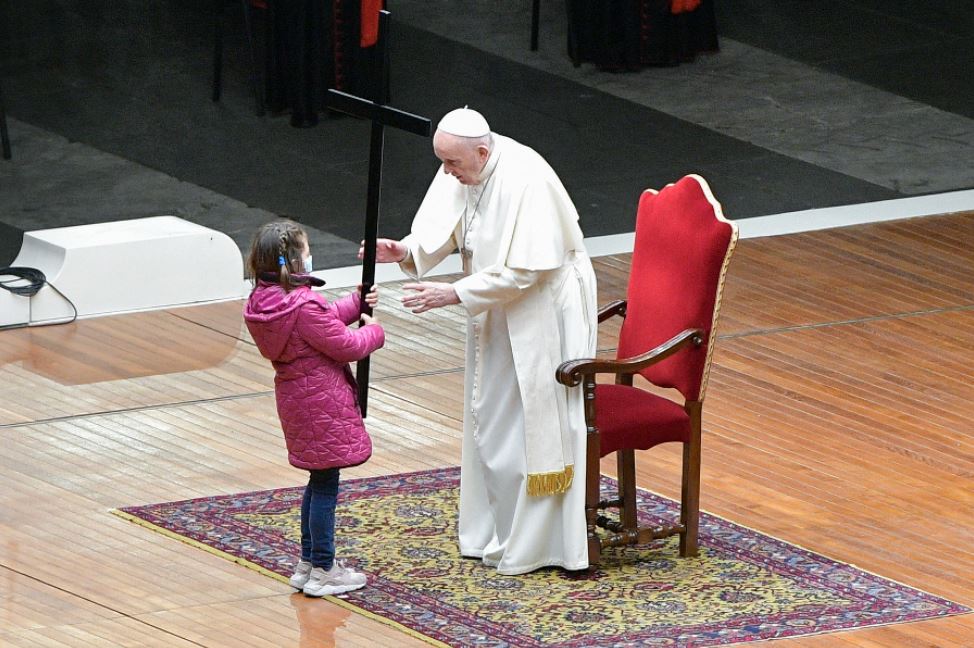 Pope Francis leads Via Crucis seen through the eyes of children

With Italy still facing coronavirus restrictions, this was the second year in succession that the Via Crucis was not held at the Colosseum, a Roman amphitheater associated with the Christian martyrs.

The prayer began at 9 p.m. local time on the parvis in front of an illuminated St. Peter’s Basilica.

Pope Francis had selected a scouting group from central Italy and youngsters from a Roman parish to prepare the texts for this year’s Stations of the Cross.

The Agesci “Foligno I” Scout Group in Umbria, made up of 145 young people between the ages of eight and 19, devised the meditations and prayers.

An additional group of around 500 children from the First Communion and Confirmation catechism classes at the south Rome parish of the Holy Martyrs of Uganda also contributed.

Explaining the choice of children to write the meditations, Vatican News said: “Pope Francis has called on the faithful to look at the sufferings of humanity through the eyes of children by entrusting them this year with the meditations for the Way of the Cross.”

“He asks us to consider more deeply their perspective of the world today, especially in this tragic time of the pandemic.”

Each of the 14 stations was accompanied by a drawing by young children and adolescents living at the Mater Divini Amoris and Tetto Casal Fattoria family homes in Rome.

The Mater Divini Amoris Family Home is run by the sisters of the Congregation of the Daughters of Our Lady of Divine Love and currently looks after eight children ages three to eight.

The Tetto Casal Fattoria Family Home is a social cooperative that supports children and youth “in the growth and construction of a life project.”

Pope Francis sat listening intently on a velvet-covered chair on a spotlit platform overlooking the square, rising to read a prayer at the end of each station. Behind him hung a scarlet curtain with a large crucifix, with candles burning beneath it.

The introductory prayer said: “Dear Jesus, You know that we children also have crosses to carry. Crosses that are no lighter or heavier than those of adults, but are still real crosses, crosses that weigh us down even at night. Only you know what they are, and take them seriously. Only you.” The reflections were read out by children as a small group carrying a simple black cross processed around the Egyptian obelisk at the center of St. Peter’s Square, led by four people carrying burning torches.

The group, which consisted of children and educators wearing face coverings, moved along a route lined by small fires. The lights formed a large flickering cross in the otherwise empty square.

As the stations progressed, the procession moved towards Pope Francis. Before the 14th and final station, a girl presented the cross to the pope. He held it tightly, pressing his forehead to it, while the meditation and prayer were read out.

The Roman tradition of holding the Way of the Cross at the Colosseum on Good Friday dates back to the pontificate of Benedict XIV, who died in 1758.

After dying out for a period, the tradition was revived in 1964 by Pope Paul VI, while under Pope John Paul II the Way of the Cross at the Colosseum became a worldwide television event.

Each year, the pope personally chooses who will write the meditations for the stations.

Last year, Pope Francis asked the chaplaincy at the “Due Palazzi” House of Detention in Padua, northern Italy, to prepare the meditations. This year’s stations concluded with a final prayer which said: “Lord, merciful Father, once again this year we have followed your Son Jesus on the way of the cross. We followed him by listening to the voices and the prayers of the children whom you yourself set before us as the model for entering your kingdom.”

“Help us to be like them: little, in need of everything, open to life. May we regain our purity of heart and our ability to see things in a clear light.”

It continued: “We ask you to bless and protect every child in our world. May all children grow in wisdom, age and grace, and so come to know and follow your special plan for their happiness.”

“Bless too all parents, and those who assist them in raising these, your children, so that they may always feel one with you as givers of life and love. Through Christ our Lord. Amen.”

The official booklet for the ceremony suggested that the pope would offer a short reflection at the end of the Via Crucis. But instead, he simply imparted his apostolic blessing, as he did last year.

After giving the apostolic blessing, the pope greeted four small children who ran up to him. He hugged them and patted their heads, before walking off the stage together with them.

Clues on the Shroud of Turin Tell...

From Bach to Biber Before Crossing...