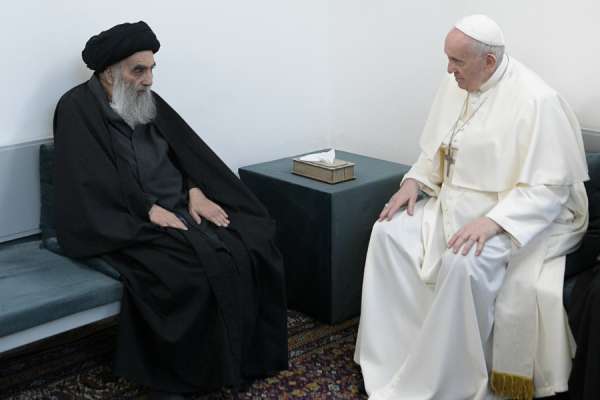 Matteo Bruni, director of the Holy See press office, said March 6 that the two men spoke for almost an hour during a private meeting at al-Sistani’s residence in Najaf, central Iraq.

“During the courtesy visit, which lasted about 45 minutes, the Holy Father stressed the importance of cooperation and friendship between religious communities for contributing — through the cultivation of mutual respect and dialogue — to the good of Iraq, the region and the entire human
family,” Bruni said.

The meeting — a milestone in relations between the Catholic Church and Shiite Islam — came on the second day of the pope’s historic visit to Iraq.

Francis stayed overnight at the apostolic nunciature in Baghdad. He left the residence early on Saturday morning, traveling by car to Baghdad International Airport.

He took an Iraqi Airways flight to Najaf, a city regarded as the third holiest city of Shiite Islam after Mecca and Medina. He was welcomed by Najaf province governor Louay al-Yasiri at Najaf Airport.

He then traveled by car to al-Sistani’s modest residence. He was greeted at the entrance by the Grand Ayatollah’s son, Mohammed Rida, who led him to the room where his father holds private conversations with visitors.

Bruni said: “The meeting was an occasion for the Pope to thank Grand Ayatollah al-Sistani for speaking up — together with the Shiite community — in defense of those most vulnerable and persecuted amid the violence and great hardships of recent years, and for affirming the sacredness of human life and the importance of the unity of the Iraqi people.”

After the private meeting and an official photo, the pope returned to Najaf Airport. He boarded a plane to Nassiriya, a city along the banks of the Euphrates River. He was welcomed by the Chaldean Archbishop Habib Jajou of Basra and Bishop Firas Dardar, leader of the Syriac Patriarchal Exarchate of Basra and the Gulf. Civil and religious authorities were also present.

He then traveled by car to the Plain of Ur for an inter-religious meeting.

“In taking leave of the Grand Ayatollah, the Holy Father stated that he continues to pray that God, the Creator of all, will grant a future of peace and fraternity for the beloved land of Iraq, for the Middle East and for the whole world,” Bruni said.